The National Science Foundation, using its Rapid Response Research (RAPID) funding mechanism, is supporting a project to collect an open community dataset from a portable seismograph deployment in an aftershock study following the magnitude 8.8 earthquake that occurred off the coast of Chile on February 27, 2010. The IRIS Consortium, on behalf of its Member Institutions, will work with scientists from US universities and the University of Chile to deploy 60 broadband seismic instruments to record aftershocks for approximately six months. This community-wide coordinated approach will provide the best quality dataset that can be utilized immediately by a wide range of researchers from around the world.

The 2010 Chile earthquake is the fifth largest megathrust earthquake ever to be recorded and provides an unprecedented opportunity to advance our understanding of megathrust earthquakes and associated phenomenon. The earthquake ruptured a segment of the Nazca/South America plate boundary adjacent to and north of the great magnitude 9.5 1960 Chile earthquake - a segment that has a long history of large damaging earthquakes. A key concern is how far north the mainshock ruptured and why it terminated where it did. Additionally, this segment of the Chile subduction zone has similarities with Cascadia and Alaska, including shallow dip, sediments in the trench, and a history of great earthquakes, and could provide important information for comparative studies.

Following the initial event, 142 aftershocks occurred during the first five days with magnitudes greater than 5.0. This energetic aftershock sequence will likely continue for many months and a rapid but well designed deployment should yield unique and valuable data. The preferred field strategy for this collaborative effort involves the deployment of ~50 stations as a backbone network (coordinated with Chilean and other international deployments) and ~30 additional stations configured in local arrays for high-resolution studies of segments of the aftershock zone or for detailed analysis of local response in basins. This deployment scheme is similar to that of the highly successful EarthScope USArray.

The initial development of this effort was organized by Susan Beck, University of Arizona and Chair of the IRIS Board of Directors; Richard Allen, University of California, Berkeley and Chair of the IRIS PASSCAL Standing Committee; and David Simpson, IRIS president, with support from the staff of the IRIS PASSCAL Instrument Center in Socorro, New Mexico. A bulkmail request for suggestions for science targets and volunteers for fieldwork was sent out on March 3, 2010, and resulted in more than 50 responses. Based on this enthusiastic response, the endorsement by the IRIS Board of Directors, and an invitation from the University of Chile, a proposal was developed and submitted to NSF that requested funding to cover the transportation and field expenses to deploy 60 broadband PASSCAL and USArray instruments in the epicentral area for approximately six months and produce an open community dataset. 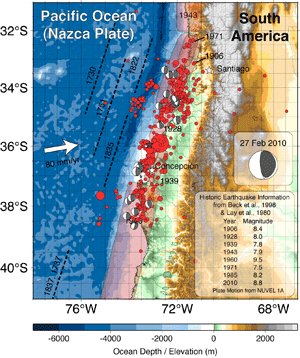 The initial IRIS deployment consists of 60 PASSCAL stations of which 50 are equipped with USArray Flexible Array broadband seismometers and 10 stations that have strong motion accelerometers. Transportation of the equipment to Chile on March 21 was kindly arranged by the US military's Southern Command (SouthCom) and coordinated by USAID's  Office of Foreign Disaster Assistance. Three teams, each consisting of one engineer from the PASSCAL Instrument Center, one member of the US academic community, and one or more representatives from the University of Chile, are carrying out the initial deployment. In addition to Steve Roecker and Ray Russo, the initial US team consists of Anne Meltzer (Lehigh University) and Angela Reusch (North Carolina A&T State University) along with Bob Greschke, Brian Bonnett and George Slad from the PASSCAL Instrument Center. Additional volunteers will be selected for later stages of the deployment and for servicing and removal of instruments.

A set of eight PASSCAL instruments had arrived in Chile just before the February 27 earthquake to be used in a study at Villarrica Volcano by Greg Waite of Michigan Tech and the group led by Kalus Bataille at the University of Concepcion. Although these instruments went missing for a few days following the earthquake, they were eventually recovered and it was agreed that these instruments could be installed pending the arrival of the main shipment of IRIS instruments on March 22. These instruments were installed March 17-19 in the southern part of the rupture zone near Concepcion.

The array of broadband instruments will be installed using well-proven field procedures developed as part of the PASSCAL and USArray programs. The instruments will be deployed for up to six months with on-site recording. A mid-experiment service run to collect data is scheduled for June and another when the instruments are removed in late September. After each collection, data and metadata will be immediately reviewed for quality by PASSCAL staff, the US team and Chilean colleagues, and then placed in the IRIS Data Management Center archive for retrieval using standard Data Management System tools.  A full copy of the data collected during the aftershock deployment will be provided to the University of Chile via formats and access methods that are acceptable to them.

All data collected as part of the US deployment will be open and freely available immediately after collection from the field. Other participants in the aftershock studies have been encouraged to allow open access to their seismological data as soon as possible after collection. This would facilitate the development of a comprehensive seismological data product for this earthquake, including all collected waveform data, metadata, event catalogs, velocity models, source models and other derived data - a major goal of this community-wide effort.

A collaborative national/international approach to post-earthquake studies, involving coordinated station siting, open data exchange and integrated product development, could serve as a model for future responses to large earthquakes. Because of the strong in-country scientific and technical capabilities; established working relationships between US, Chilean and other international teams; relatively easy logistic access to the aftershock zone; and an aftershock zone that will be extended in both space and time, the Chilean earthquake provides an exceptionally rich scientific opportunity to demonstrate the value of this collaborative approach. This type of coordinated international response was encouraged by Working Group V on Portable Instrumentation of the Federation of Digital Seismograph Networks (FDSN) at the IASPEI/FDSN meeting in Cape Town in January 2009.

Letters to the Seismology Community

In the aftermath of the Magnitude 8.8 earthquake in Chile, we have been discussing with our Chile colleagues and the IRIS staff how the U.S. seismological community could best respond. This is an unprecedented opportunity to deploy a significant number of seismic stations for 4-5 months to capture an aftershock sequence for a community-wide open data set that could be used for a large range of scientific studies. Given the scope of the aftershock area and realities of the logistics, we are proposing a community-coordinated response. All data would open providing a “coordinated seismic data product” for the 2010 Chile Earthquake.

We need an immediate response from the community on your interest and recommendations for scientific targets and deployment strategies. This effort will have to be carefully coordinated with our Chilean colleagues, so the deployment plan will also be influenced by their interests and logistics in the field. We would also like some indication if you are interested and able to go into the field to assist in the deployment (Spanish speakers with international deployment experience would be ideal). Initial discussions suggest that we could have as many as 50-100 instruments. Time is short so we would like to hear from those interested in the next 24 hours. IRIS, with the help of the community, is prepared to request funding using the NSF RAPID proposal mechanism for the deployment costs. Funding for science projects using this data would come from NSF PI-driven proposals to be submitted later by the PIs.

To all who responded to our request for scientific targets and field assistance related to a deployment in Chile (and with apologies for not replying to each of you individually):

The response has been exciting, stimulating and overwhelming! More than 50 people have replied with lots of great ideas and offers to help in the field.

Based on your input, we are preparing a "RAPID" proposal to NSF for deployment of 50 - 100 broadband stations starting in mid-March and extending for approximately six months. The field deployments will be done in collaboration with the University of Chile under the direction of Sergio Barrientos. Steve Roecker and Ray Russo have agreed to help coordinate and lead the US field efforts.  Proposed deployment strategies and geometries are now being worked out. We will coordinate deployments with the Chileans and a number of international groups who are also bringing instruments.

It is being proposed to NSF that the initial deployment begin soon after March 18 and involve four deployment teams, each including a staff member from the PASSCAL Instrument Center, a representative from the University of Chile and one of two staff or students from the US academic community. Under the harsh conditions anticipated for the first deployment, we will be selecting experienced field-hands, preferably with Spanish language skills. This selection process is still underway, so we ask your patience as we converge on the initial teams. The response of help is significantly larger than the number of field hands that can go without overwhelming our Chilean colleagues.  We ask for your understanding if there is not a slot for you initially.  There will be additional opportunities for participation later in the field program.

Once NSF has made a decision on the proposal (hopefully within the next week), we will develop a webpage to provide on-going information and details on how to be involved.

Again - thanks for your interest and support.
Stay tuned - this effort promises to produce a very exciting data set.