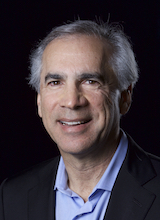 Ross S. Stein is CEO and cofounder of Temblor, Inc., Adjunct Professor of Geophysics at Stanford University, US Geological Survey Scientist Emeritus, Past President of the Tectonophysics section of the American Geophysical Union, and 2018 International Distinguished Lecturer of the Geological Society of America. A Fellow of the American Geophysical Union and Geological Society of America, Stein received the 2012 Gilbert F. White Natural Hazards Award from the American Geophysical Union, and received the 2000 Eugene M. Shoemaker Distinguished Achievement Award of the US Geological Survey. In 2003, the Science Citation Index reported that Stein was the second most cited author in earthquake science during the preceding decade; he was tenth most cited during 1900-2010. Stein frequently brings insights to public media interviews and public talks, and in IMAX and Discovery Channel films. He gave a 2012 TEDx talk, ‘Defeating Earthquakes,’ which has been viewed more than 50,000 times. Stein has given the Francis Birch Lecture, Gilbert White Lecture, a Centennial Plenary Lecture, and the Frontiers of Geophysics Lecture—all keynote presentations during annual Fall Meetings of the American Geophysical Union. Stein co-founded the Global Earthquake Model (GEM Foundation), and chaired its Science Board until 2015. He is a member of the Resilient America Roundtable of the National Academy of Sciences, and the Advisory Council on Catastrophes of Zurich Insurance.

Almost everything we love about the San Francisco Bay area is brought to us by the faults. Absent the San Andreas and Hayward faults, there would be no San Francisco Bay, the only deep protected harbor on the California coast, and so the wellspring of the Gold Rush. The Hayward fault lifts up the Berkeley and Oakland Hills, with their magnificent sunset views of the Golden Gate Bridge. The San Gregorio fault makes Big Sur ‘big.’ A bend in the San Andreas fault thrusts up the Santa Cruz mountains, the spine of the peninsula, and the Marin headlands. These coastal ranges temper the climate, bathe us in fog, and crown us in Redwoods. What I want you to see is that we enjoy the fruits of the faults every day. And so, we must learn to live with their occasional spoils—as befell the San Francisco Bay area in 1868, most famously in 1906, and 1989. You will see that while we can’t predict earthquakes, we know where and why the hazard is high. And we know how to erect buildings that can withstand anything the faults can hurl at them. During this presentation, we’ll move from the discovery of gold to the discovery of what an earthquake is, and how quakes interact, illustrated with four different demos. And, I’ll leave you with the means to assess your own seismic risk, to ensure the safety of your own family.