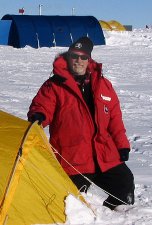 Fire and Ice: Volcanoes, Earth Structure, and the Evolution of the Antarctic Ice Sheet

The continent of Antarctica supports the largest ice sheets in the world. The history of the ice sheets is intertwined with the geological history of continent, involving processes such as mountain building, the response of the land to the weight of glaciers, and heat flow melting and lubricating the bottom of the ice sheet. Very little is known about the history of Antarctica because the ice sheets preclude the usual geological sampling and mapping, so seismology offers a method to “see through the ice” and understand the continent beneath. Recent advances in technology now allow autonomous seismographs to be deployed across the continent for the first time.

In this presentation I will discuss projects that are installing seismographs across Antarctica and summarize recent discoveries. New results reveal that East Antarctica represents an ancient continent, with an average geological age of greater than one billion years and with highlands supported by thick continental crust.  In contrast, West Antarctica shows evidence of recent tectonic activity, and high heat flow that may lubricate the base of the ice sheet. The seismographs record earthquakes from magma movement associated with volcanoes beneath the ice. The high mantle temperatures suggest low mantle viscosity, such that the response of the land to ice mass changes will occur within a few hundred years. These insights are changing the way we model the recent history of the ice sheet.

Seismograms also provide important constraints on the movement and forces acting on the ice sheets. “Icequakes” ranging from very small cracking events near the surface of the ice sheet to massive crevassing and calving episodes produce unique seismic signals that help reveal the physics of ice movement. The largest signals come from a unique region on the Whillans Ice Stream, where a 100 mile-long section of the ice stream lurches forward twice a day, triggered by ocean tides, and sending seismic waves traveling across the entire continent. This unusual behavior may signal the slowing down of this ice stream in response to changes in the amount of water along the ice stream bed.