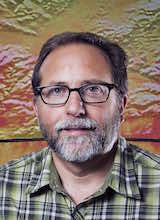 Arthur Rodgers joined Lawrence Livermore National Laboratory (LLNL) as a seismologist in 1997. He has worked on high-performance computing and computational seismology since 2004. This worked involved modeling of seismic waves from earthquakes and explosions. Dr. Rodgers has worked with teams on modeling earthquakes in the San Francisco Bay Area, as well as educational outreach with the California Academy of Sciences (2012), LLNL’s Science on Saturday (2015) and the American Museum of Natural History (2018). He obtained a B.S. in Physics from Northeastern University and a Ph.D. from the University of Colorado in 1993. He was a postdoctoral scholar at New Mexico State University (1994) and the University of California Santa Cruz (1994-1996). In 2010, he was a Fulbright Scholar to Grenoble France. He is currently a Visiting Researcher at Lawrence Berkeley National Laboratory and the University of California Berkeley Seismology Laboratory.

Computer simulations of earthquakes can be performed to understand the expected level and character of shaking for possible future events. Advances in numerical methods and the ever growing power of parallel processing supercomputers enable ever more realistic modeling of earthquake shaking, including geology and topography. I’ll describe how computer simulations are enabled by world-class supercomputers and how these simulations are generating ever more realistic motions for hazard and risk studies. This lecture will describe supercomputer modeling of earthquake ground motions with a focus on large Hayward Fault ruptures. The last major earthquake on the Hayward Fault, with magnitude 6.5-7.0, occurred on October 21, 1868. This earthquake caused significant damage to structures for the few thousands of people living in the “East Bay” at that time. Geologic evidence strongly suggests major earthquakes on the Hayward Fault occur about every 140-160 years. It has been 150 years since the 1868 event, but today approximately 2.5 million people live near the Hayward Fault. Therefore, simulations like the one on the Hayward Fault can help inform policy makers and the general public about seismic hazard and risk.