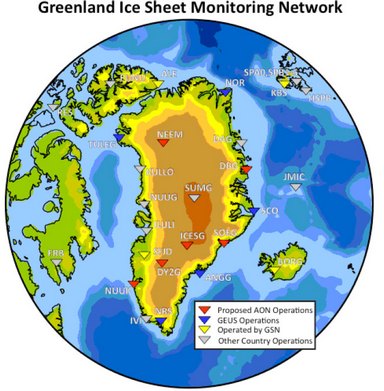 The Greenland Ice Sheet Monitoring Network (GLISN) is an 11-nation collaboration initiated by IRIS to establish a new northern observatory for monitoring this rapidly changing ice sheet. The 32-station network (see map on right) was created by the installation of new stations, upgrading existing stations, and sharing of data from some stations that had not previously been openly available to the general public. GLISN partners include Denmark, Germany, Switzerland, Canada, Norway, Japan, Italy, France, Poland, Korea and, of course, the United States.

Often scientists or organizations establish temporary or permanent seismic stations for their own purposes and the data recorded by these stations are limited to internal use. However, many seismic stations have a wide variety of uses that often extend beyond the goals of the original experiment. IRIS seeks out these multi-use facilities through continuous interactions with seismologists from around the globe to encourage network operators to share their data with the broader seismological community for the benefit of all. One such area was in Greenland where there were many seismic stations collecting data that were not shared openly. Through the establishment of the GLISN project, IRIS brought together the many groups that conduct seismic experiments around Greenland, resulting in many new stations contributing data that are now available to any seismologist wishing to study this very important area of Earth.

In addition to the shared stations, IRIS installed 11 new stations as a part of this effort, involving many trips to Greenland. Field efforts in Greenland have been underway for three years and, with the completion of the 2012 summer season, all stations are now operational and transmitting data to the IRIS Data Management Center (virtual network code _GLISN). Field engineering is headed up by a GLISN field engineer and supported by staff from the IRIS Polar Support Services group at the PASSCAL Instrument Center at New Mexico Institute of Mining and Technology. This season, the Polar Support Services staff was joined by an IRIS student intern who participated in the fieldwork at the North Greenland Eemian Ice Drilling camp (station NEEM). He came to the New Mexico desert to learn about seismology and ended up on the top of the world (see the story on his summer activities)!

In addition, the IRIS Polar Support staff was joined by personnel from the Japanese Institute for Polar Research who contributed equipment for the station at ICE-South (ICESG), and personnel from the Geologic Survey of Denmark and Greenland (GEUS – Copenhagen).

Data from GLISN are routed through the Polar Support Services data center where the telemetry is monitored and data are quality checked, and are then passed to the IRIS Data Management Center for archiving.

More information on the International GLISN project can be found at the following sites: