Monopoly was originally created by Elizabeth Magie in 1903 to protest against monopolists like Carnegie and Rockefeller. In that spirit, the current game has been used to demonstrate systemic inequalities and structural discrimination in society, including pay inequity, class stratification, redlining and more. Several papers have been written about how to use the game to introduce concepts of social justice, including this work outlining how to use Monopoly to introduce race and ethnic relations in the classroom, and this paper providing instructions, assignments and worksheets. Additional reading and instructions can be found here and here.

Building on these ideas, we created a version of the game we’re calling “Meritocracy Monopoly”. In our version, there are 4 player “identities” and each player uses a different set of rules based on actual demographic data. While the outcome of the game isn’t guaranteed, the odds are heavily stacked in the favor of some players and stacked against others.

During the SAGE / GAGE workshop more than 50 participants gathered to play “Meritocracy Monopoly”. After 45 minutes we stopped playing and unveiled the demographic “identities” of the different players, read the statistics that formed the basis for the rules, and had a brief discussion about how systemic inequalities and privilege shape society. Due to time constraints players were not able to finish their games, however the time allotted was sufficient to demonstrate the concept and in almost every case the same player identity was winning. In the future, we will provide more game boards and limit the number of players to 4-5 per board to allow each player to have more turns. 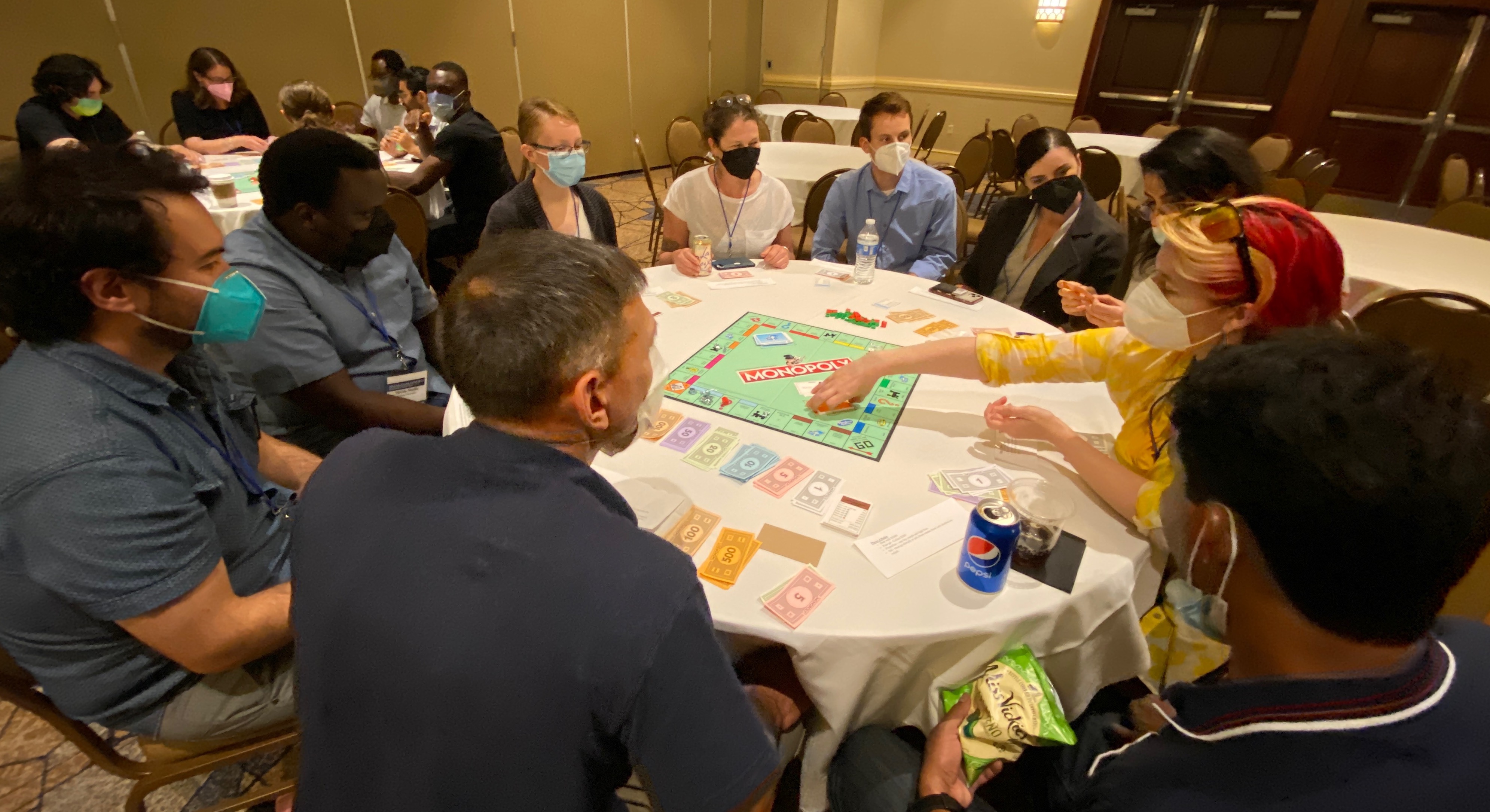 Below are the player rules, sources used to create the rules, and some of the information that was shared at the end of the game. Feel free to use and share these resources. 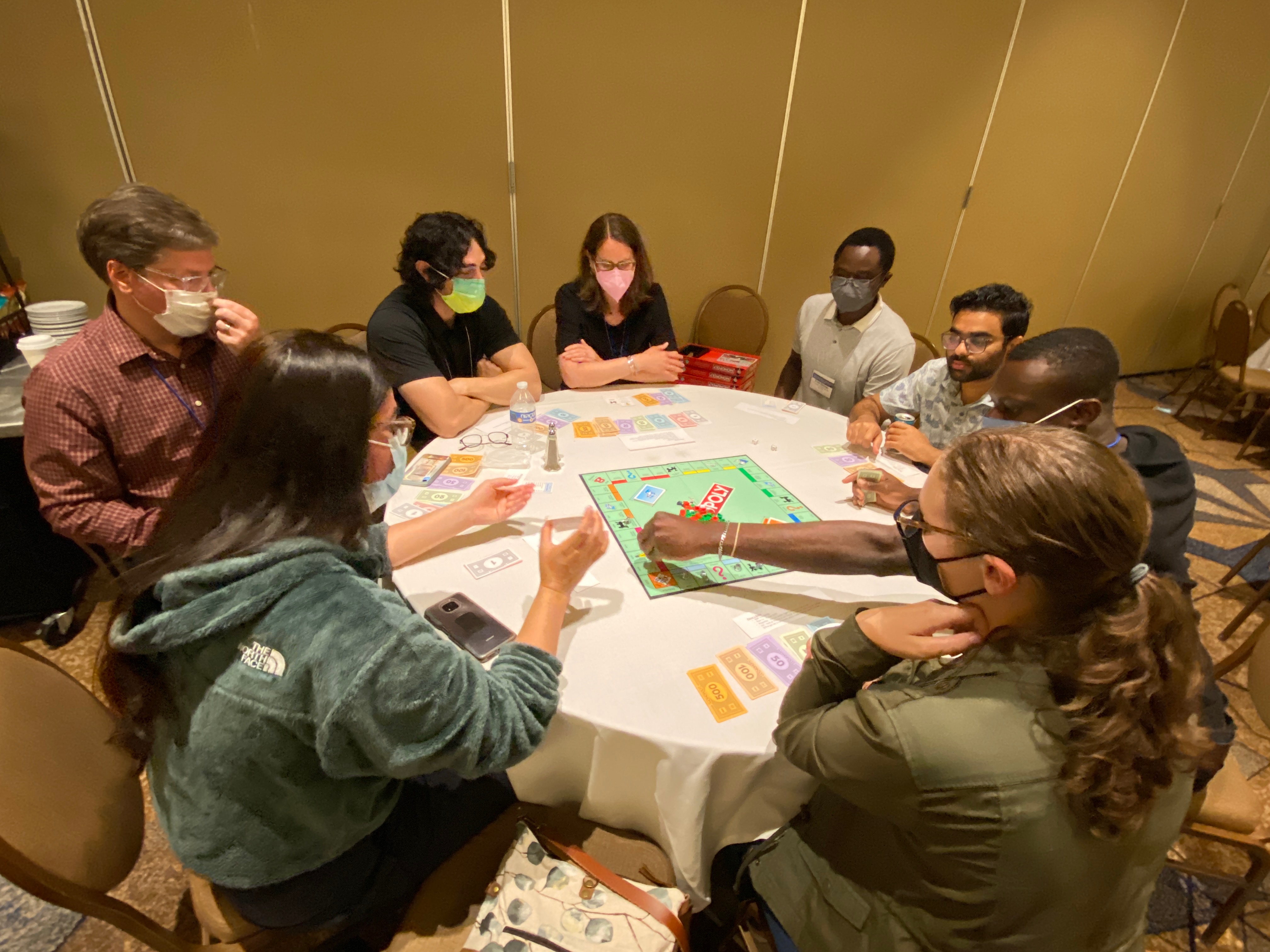 Take Aways (Drawn from References below)

"Wealth inequality in one generation also translates into inequality in opportunity for the next generation. For instance, the relationship between families’ wealth and their children’s college attainment is strong and rapidly growing, contributing to intergenerational stability in the wealth distribution." - Stone Center for Inequity Dynamics

"Redlining - redlining is a discriminatory practice in which services (financial and otherwise) are withheld from potential customers who reside in neighborhoods classified as 'hazardous' to investment; these neighborhoods have significant numbers of racial and ethnic minorities."-Wikipedia

"…found that nearly all formerly redlined zones in the country are still disproportionately Black, Latino or Asian compared with their surrounding metropolitan area, while two-thirds of greenlined zones — neighborhoods that HOLC deemed “best” for mortgage lending — are still overwhelmingly white." – 538

“Indian Country has been plagued by systemic red-lining and lack of access to capital and banking services for decades. This is one of the major contributing factors to the impoverished conditions that unfortunately continue to exist in many Native communities and on reservations,” - Tearsheet

IRIS is committed to advancing justice, equity, diversity, and inclusion within our organization and our larger scientific community. Learn more about our efforts here. For more information contact us at jedi@iris.edu

"Let the children once see clearly the gross injustice of our present system...” – Elizabeth Magie