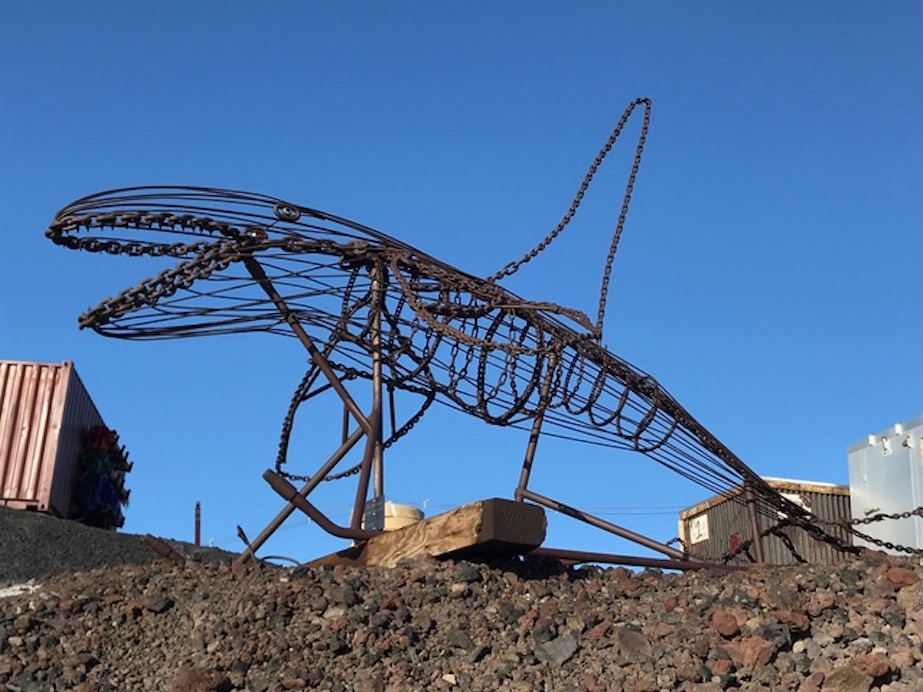 Art on the Ice

Unbelievably, my time in Antarctica is starting to get short. And there is still so much to see and do.

The big New Year’s Eve tradition here, for the past 30 years (!) is . . . Icestock! A parking area outside the galley is converted into a concert venue. The galley sets up a BBQ hut with burgers and brats. A chili cook-off on camp stoves is in the back (I thought the Kiwi entry was mighty fine, but everyone agreed that the green chili chili was superb). A flatbed trailer serves as a stage. And a magnificent accumulation of amplifiers and speakers (probably 30 years worth of shipments down here) is placed on the stage. Then, it is a non-stop rotation of bands from 4:00 PM till midnight. Some musicians appeared in more than one band. There was folk, Celtic Rock(?!), punk, country, blues, a cappella, and more. 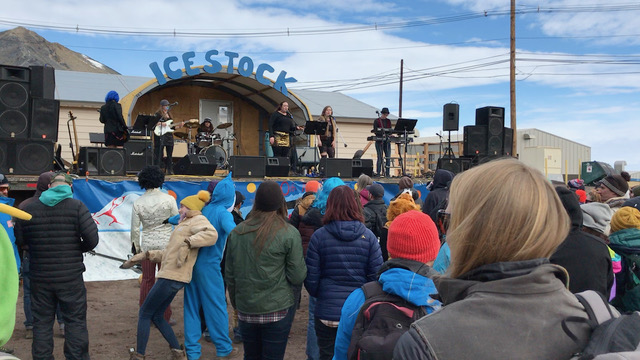 Lots of people were wandering around in costumes that they foraged from a giant cardboard tri-wall box at the back of the concert - there were flamingos, tigers, and even a T-rex. 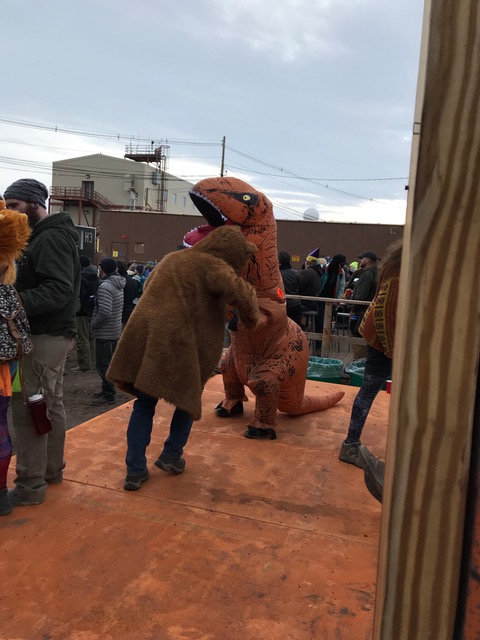 There’s some serious talent at Icestock, to be sure. And now I understand why every evening after dinner for the last month I have seen people carrying instruments and heading off to various machine shops, vehicle repair shops or any other after-hours space they can use for practice - no shortage of these spaces in McMurdo. Anyway, Icestock was great fun!

New Years day was a special brunch with a Luau theme in the galley. It is not an overstatement to say that the galley is a central part of life here. Later that afternoon I managed to grab an opportunity to finally climb Castle Rock. The view from the top was great and we could see open water about 10 miles away, though the distance was hard to judge. This photo shows Galen descending along a fixed rope route. 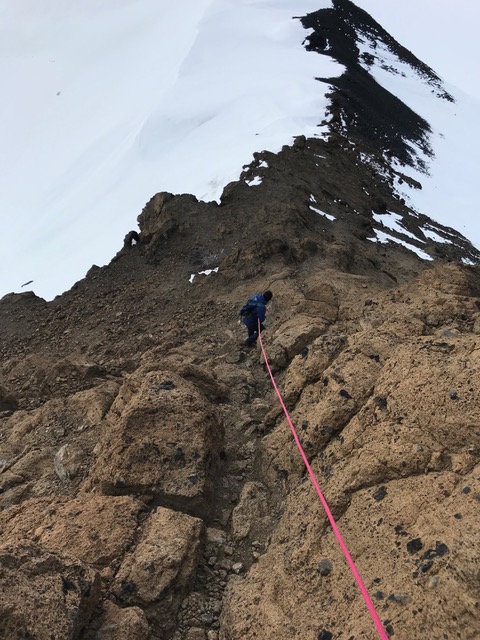 There is a lot of “art” around - whether it is a simple little drawing, a sketch somewhere, or the way the “carps” (carpenters) decorate the various functional crates, storage boxes, carts, or other items that they build. I understand that some of the art is produced as a result of a sort of “visiting artist” program sponsored by NSF.

This photo of a Weddell seal near the entrance to the Galley keeps changing its look as people sketch with dry erase markers on the glass frame. 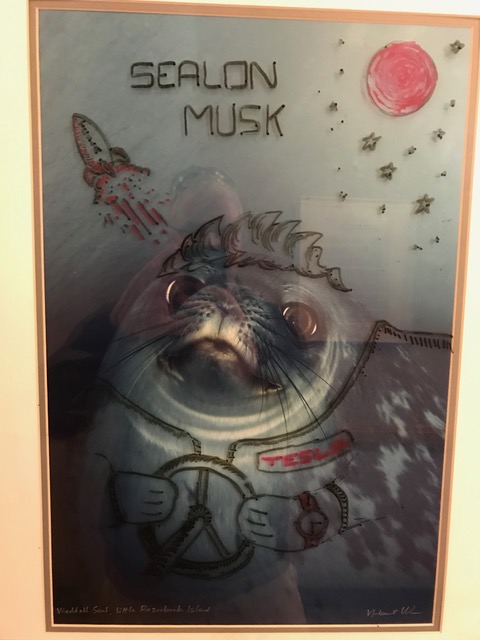 Here is the seasonal version. Not sure what is next. 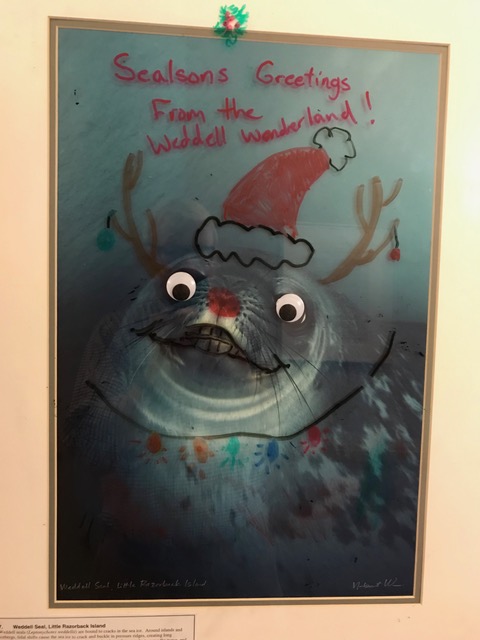 In addition to all the “folk art” that materializes around the station there are paintings and photos (many historical ones) down almost every hall. I spent a couple hours one Sunday morning just wandering some of the halls and looking at the displays, the art, science posters, historical photographs, etc. 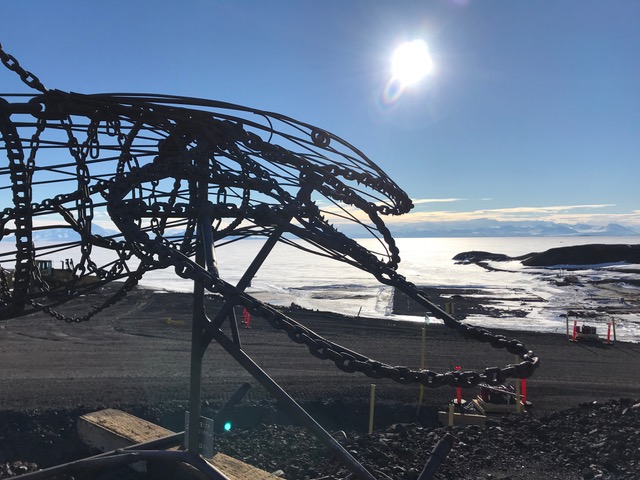 Maybe it looks more orca-like in this view: 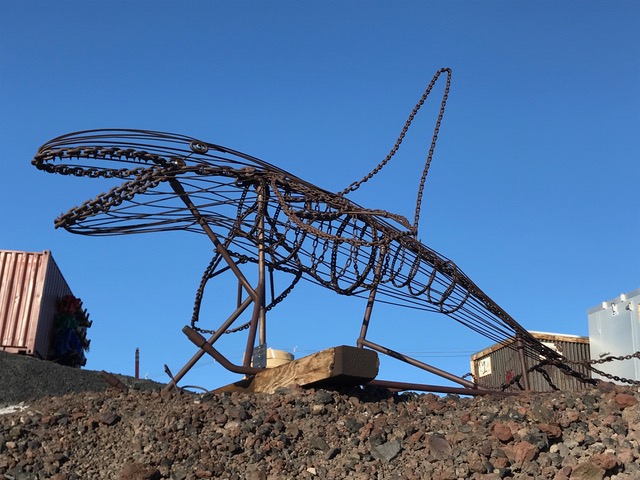 Every good science project needs a sticker. Here is a shot of graffiti and science project stickers in the back of a “delta” that they use for shuttling people to the airfields. The IRIS PASSCAL project is represented. Can you spot it? 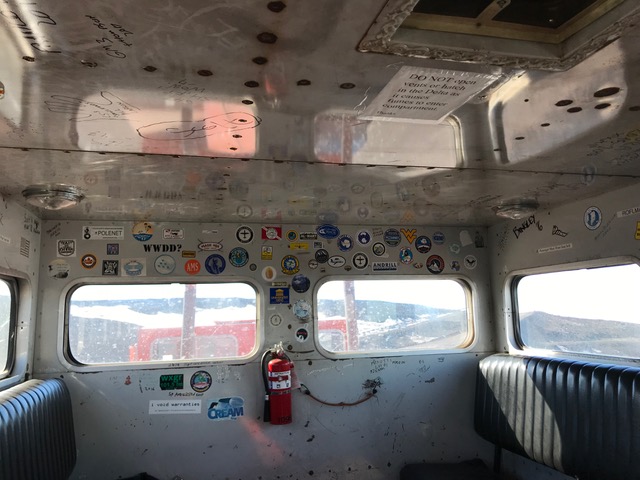 Googly eyes are always good for turning utilitarian objects into folk art (am I being too generous with the term “folk art"?). There are a lot of googly eyes on things at McMurdo. 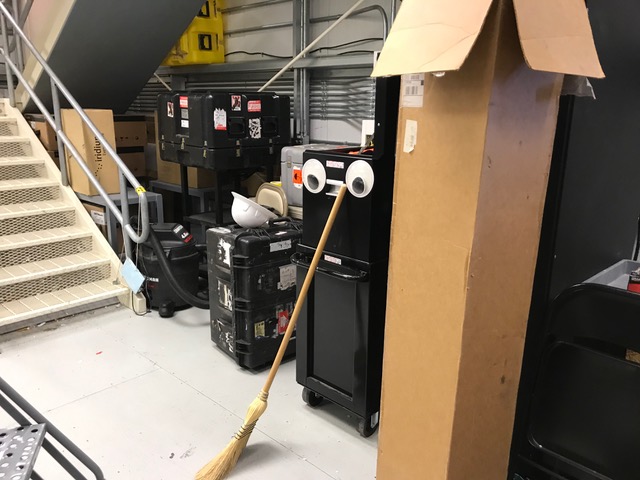 Someone crafted this little wasp out of mylar scraps, to create a mascot for the x-calibur neutron star telescope. 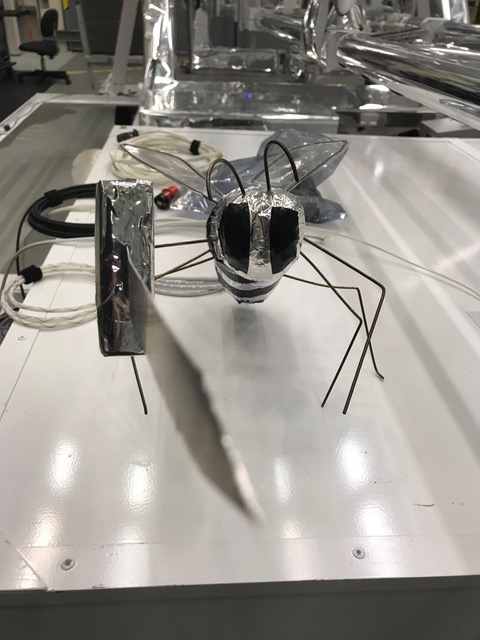 An upcoming “mustache” competition has weird little penguins appearing everywhere. Note the ever-present googly eyes! And I am still not sure what the mustache competition is. 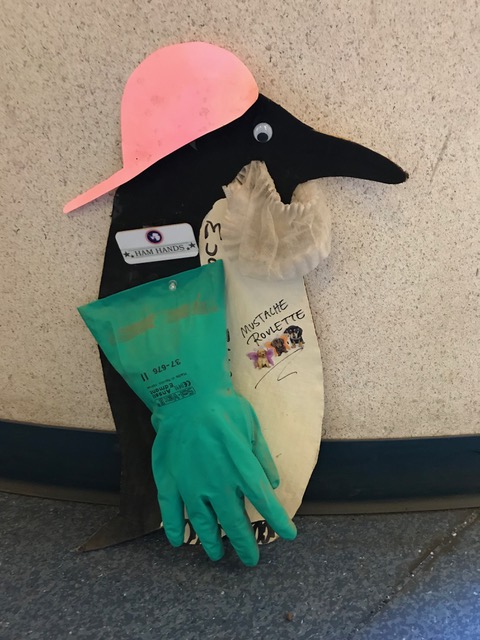 Nothing is immune from a little decoration. Here are some handcarts that are used for hauling gear out to the helicopters. Even they are decorated. 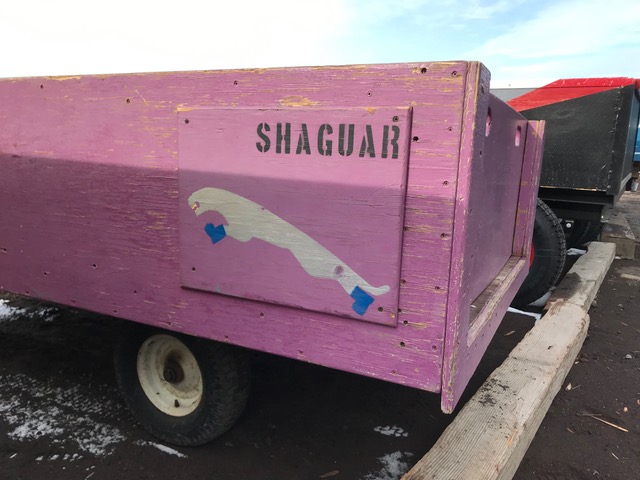 This one is pretty clearly labeled . . . 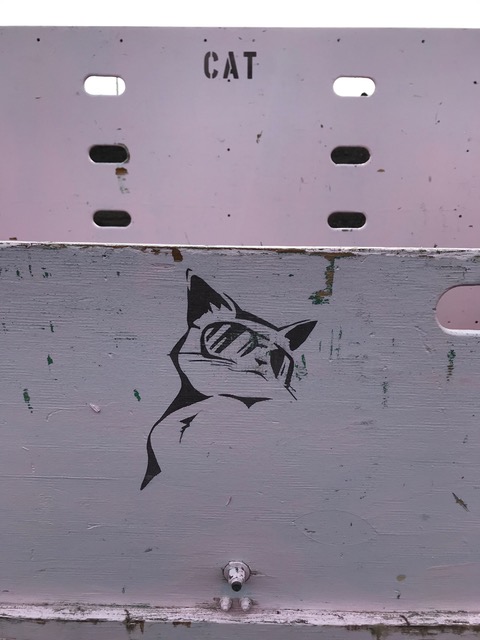 Here is a personal favorite. I love this sketch hanging on the wall in the science lab. The caption indicates it was drawn in about 2 minutes by a famous cartoonist for the New Yorker (while he was chatting with the people he gave the drawing to!). A penguin’s view of the world. 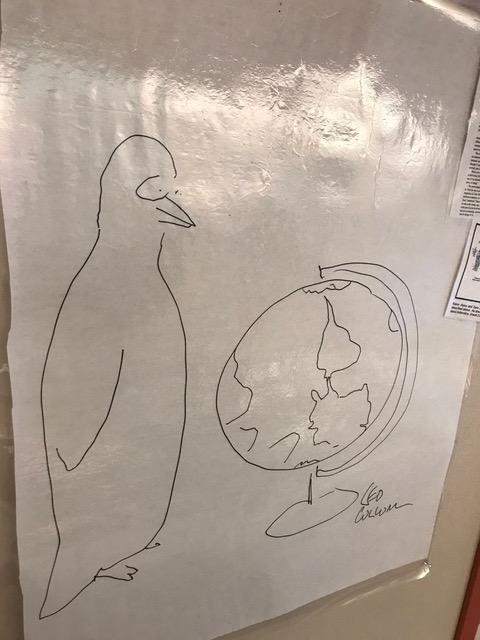 This photo shows the troll that lives under the footbridge leading to the galley. I pass over this guy two or three times a day. 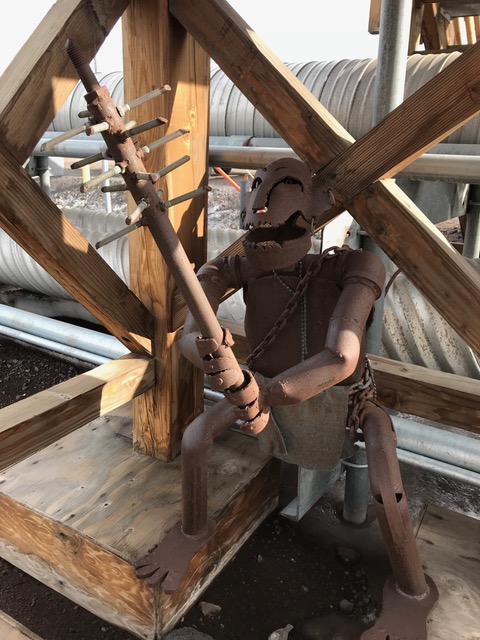 And this is my own attempt at a little humor. We received a shipment of so-called “ox boxes” for packing some field gear that is going out to a remote field camp. It was hard to keep the oxen from getting out . . . 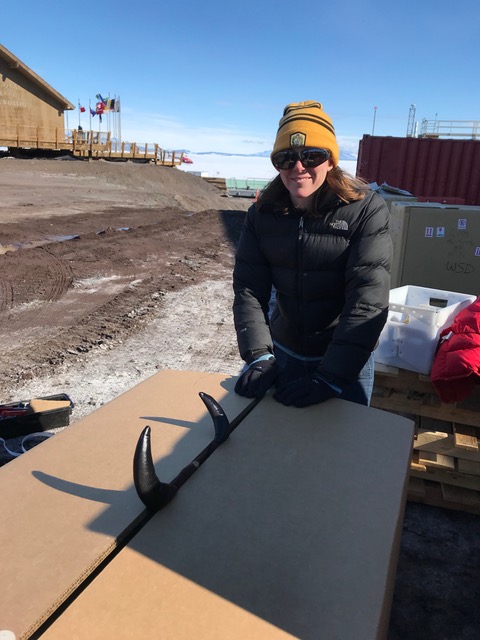 We were supposed to fly in a helicopter this evening (don’t worry about flying in the dark - it is light 24 h / day here) up to the top of Mt Erebus, an active volcano, to work on a seismic station. Alas, a low fog/cloud cover moved in and the flight was cancelled. Cancelled flights are a way of life here at McMurdo. No Antarctic experience would be complete without some flight cancellations. Hopefully we will have better luck tomorrow and I’ll have some pics from the top of this volcano.