Workshop on the 2010 Maule Earthquake: 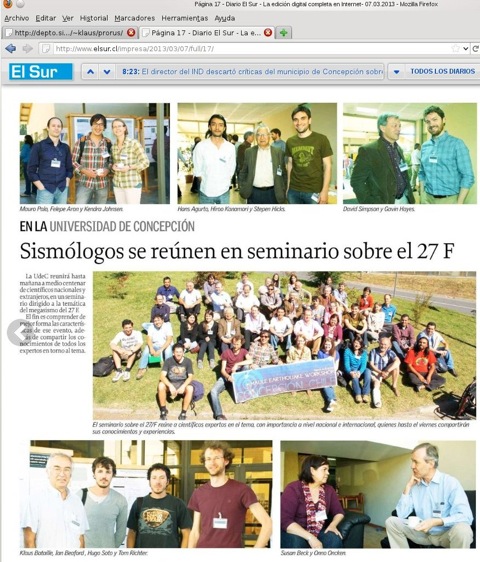 The goal of this workshop was to share our scientific discoveries gleaned since the Maule earthquake, evaluate our community response to the earthquake, and to look forward to future directions. Approximately 60 participants attended, including representatives from all of the aftershock teams, a large contingent of Chilean researchers and students, and three students from the US. Tremendous progress has been made in our understanding of great subduction zone earthquakes and the subduction process in the last few years, in large part due to the occurrence of several magnitude >8.5 earthquakes including the Maule 27 February 2010 M=8.8 earthquake off the coast of south central Chile. The three years elapsed since the occurrence of the largest earthquake in South America during the 21st century, has given us the opportunity to examine what has been learned from this earthquake, not only in terms of scientific discovery but also in terms of coordinating a rapid response after a major earthquake. A rapid response following the earthquake resulted in geological observations, short period and broad-band seismic data (including OBS), GPS, InSAR, tide gauge and tsunami runup data that have led to new scientific discoveries.

The unprecedented international field-deployment effort by the seismological community immediately after the earthquake allowed the interaction of many groups from different countries. The data was open for the entire community (independently of their participation) as soon as it could be archived. An additional goal of this workshop was to evaluate this response and develop plans to improve it for future earthquakes.

An opening ceremony at the University of Concepcion on Monday evening included talks by representatives of the University and ONEMI (Oficina Nacional de Emergencia del Ministerio del Interior) and a history of seismological studies in Chile by Armando Cisternas. Field trips at the end of the workshop focused on uplift areas and reconstruction in coastal areas south and north of Concepcion impacted by the earthquake.  Scientific and poster sessions at the Workshop presented the results of studies using the portable aftershock data and showed that a wide variety of investigations were being undertaken that extended well beyond initial event location. Hiroo Kanamori gave a keynote presentation that reviewed recent improvements in the understanding of the styles of rupture in large and great earthquakes. Topics covered in presentations and posters included:

•   Structure of the seismogenic zone forearc

Discussion sessions confirmed that the agreement to share and merge data from the aftershock deployment had indeed been a great success. Data from the US, British and French stations are available through the IRIS Data Management Center and the German data are available through GFZ Potsdam. The Potsdam, Liverpool and the USGS NEIC have created catalogs of more than 30,000 events. Much more extensive and comprehensive analyses had already been carried out than would have been possible from the individual data sets in isolation. The USGS has relocated 2500 events using a multiple event location approach and determined regional moment tensor solutions for 450 events larger than m4.5. Sharing and comparing catalogs provided an important foundation for more detailed studies of events and clusters within the aftershock zone. There is special interest in the larger aftershocks and those that occur outside the plate interface, especially normal faulting events (~M7) in the upper plate that are of special concern in Chile because they can have shallow hypocenters on-shore, in proximity to populated areas.

U.S. citizens entering Chile must have a valid passport. U.S. citizens traveling to Chile for recreation, tourism, business, or academic conferences do not need to obtain a visa prior to their arrival in Chile however a visa is required upon entry.  US citizens will be issued a visa at the airport for $160.  Credit cards are accepted. The exchange rate for 1 U.S. Dollar = 480 Chilean Peso (CLP).

09:40 Susan Beck, Imaging the Chile Forearc after the 2010 Maule earthquake

14:40 AndrésTassara, Contrasting nature of the megathrust along the area ruptured by the Maule earthquake: aftershocks, afterslip and gravity-derived forearc structure

08:50 Juan Carmona, Motion perception in the tall buildings of Buenos Aires City caused by the great 2010 Chilean Seismic event and its kinematic particularities

10:00 Dante Figueroa, Detection of the Japan 2011 tsunami 40 km from the coast of Chile using a coastal HF radar

10:20 Mairi Best, Applications of cabled observatories to earthquake and tsunami research and early detection: examples from Canada and Europe

10:40 Víctor Ariel Gallardo, On the need and convenience of establishing an Oceanographic Observatory in Dichato, Chile

Notice:
The abstract submission period for this workshop closed at .

Notice:
The whitepaper submission period for this workshop closed at .

Notice:
The webinar registration period for this workshop closed at .

Notice:
The scholarship application period for this workshop closed at .