Forensic Seismology and Nuclear Testing: The Detective Work of Seismologists

When a country claims to have tested a nuclear device of a certain size how can the rest of the world verify the claim? When a country claims they are not conducting nuclear tests, how can we be sure? The Global Seismic Network allows seismologists to examine large events occurring around the world and determine if they were caused by a nuclear test or an earthquake. Acting much like detectives, seismologists can examine the seismic data from a large event under the Earth’s surface to determine where and when the event occurred and what caused it.

The connection between seismology and nuclear explosion monitoring began at the culmination of the Manhattan Project with the detonation of the first fission nuclear explosion in Southern New Mexico in July of 1945 and continues today with renewed discussions of ratification of the Comprehensive Nuclear Test Ban Treaty.  Along this journey comes the establishment of the World Wide Standard Seismic Network followed by the Global Seismic Network and includes the early days of plate tectonics.  More recently these activities have expanded into the need for regional seismic arrays and inclusion of additional technologies such as infrasound to supplement the location and characterization of natural and man made events around the world. 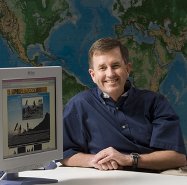 Brian Stump received his B.A. from Linfield College (1974), his M.A. and Ph.D. from University of California, Berkeley (1975, 1979), where he held a UC Regents Intern Fellowship.  Immediately following his graduate education he spent 4 years on active duty with the US Air Force as a staff seismologist and ultimately as Chief of the Geological Siting and Seismology Section.  He joined the faculty of Department of Geological Sciences at Southern Methodist University in 1983 and now holds the Albritton Chair of Geological Sciences.  He served as Department Chair from 1991-1993.

From 1994 to1997 he joined the technical staff of the Los Alamos National Laboratory where he was program manager of the Nuclear Test Monitoring Group and participated in the negotiations for the Comprehensive Nuclear Test Ban Treaty in Geneva, Switzerland, as a scientific advisor for the Department of Energy.  He was a member of the team that received the Los Alamos National Laboratory Outstanding Performer Small Group Award in 1996.

He enjoys teaching at both the graduate and undergraduate levels including an introductory course in geology that views the earth from the perspective of earthquakes and volcanoes and an interdisciplinary course that focuses on the impact of science and technology on society with emphasis on nuclear issues.  Stump was the 2004 Dedman Family Distinguished Professor and in 2006 was awarded the Phi Beta Kappa Perrine Prize for outstanding teaching and scholarship.

Brian’s research focuses on the utilization of waves in the atmosphere and the solid earth as tools for assessing both the material through which the waves propagate as well as the characteristics of the source that generates the waves and has led to in excess of 100 articles.  His initial work focusing on seismic waveforms from nuclear explosions found application in identification, location and yield determination and motivated his contribution to the test ban treaty negotiations.  He and his graduate students have had a continuously, well-funded research program for over 20 years.  He also contributes in this area as the Secretary of the Department of Defense Seismic Research Panel, a position held since 1987.

Recent work in collaboration with the Korean Institute of Geology and Minerals has focused on the acquisition and utilization of combined data sets of seismic and low frequency acoustic (infrasound) data for characterization of events at or near the solid earth atmosphere boundary.  He and his research group have designed, constructed and now operate a set of innovative seismo-acoustic laboratories that provide observations from man-made events such as mining and construction explosions, as well as natural events such as earthquakes and bolides.

Outside professional activities have included a recent three-year term on the board of directors for the Incorporated Research Institutions of Seismology (IRIS) and a recently completed a term as the Chair of the Planning Committee for IRIS.

mine blasts in Wyoming using an automatic time-frequency discriminant, Bulletin of Seismological Society of America, 96, 2368-2382.

and surface wave study of the Velocity structure beneath the Yanqing-Huailai Basin, NW of Beijing,

Lg phase and coupled high frequency infrasound, to appear Bulletin of the Seismological Society of America.