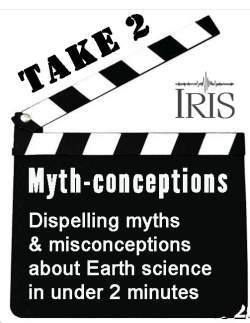 With this series of 2-minute animations, we address common misunderstandings, misconceptions and myths.

Earth science  frequently deals with difficult concepts, abstractions, mathematical laws, and theory. Earthquake science, called seismology is concerned with many processes that are not easily observed as they may be too small, too slow, too fast, or on too large a scale to convey to the general public. This makes it a particularly difficult branch of science for learners with no background. Which leads to misunderstandings and misconceptions.

Misconceptions may form as young learners try to make sense of our natural world, and are faced with scientific language.  They can see the effects of earthquakes, but the cause is based on the theory of plate tectonics, a concept not taught until the middle school years, long after ideas or fears are fixed in our beliefs. Research has shown that once beliefs are stored in our brains, it is very difficult to let go of them, even when we are shown that they are incorrect.

These two-minute clips are not intended to be comprehensive, but attempt to clarify misunderstood concepts with simplified graphics and language. Myth-conceptions is a playful way of saying that myths and misconceptions abound, but our goal is to provide tools for educators to help in teaching correct scientific concepts.

Take 2: Can Earthquakes Be Predicted? (Part 1) 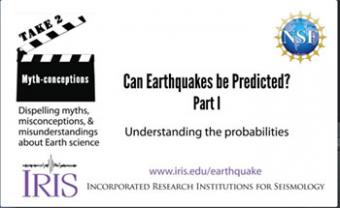 For an earthquake prediction to be meaningful, it has to specify a time, location, and magnitude range that is unlikely to occur randomly.  Who can predict an earthquake?
Animation Novice
Take 2: Can Earthquakes Be Predicted? (Part 2) 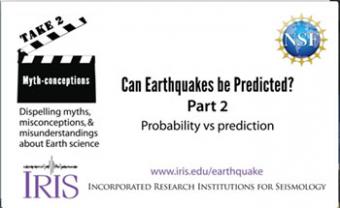 Seismologists would love to be able to predict a major earthquake. Watch Part 1 to learn what is required. This animation compares an earthquake to a heart attack.
Animation Novice
Take 2: Hazard vs. Risk 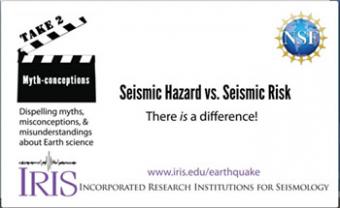 A seismic hazard is the probability that earthquake shaking of a certain intensity will occur in a given geographic area, within a given window of time.  From that, risks can be assessed and included in mitigation efforts. Let's compare them.
Animation Novice
Take 2: Epicenter vs. Hypocenter (Yep, there is a difference) 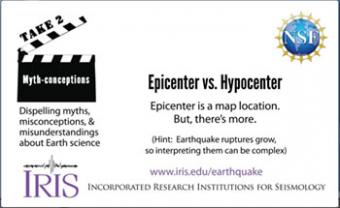 The epicenter is the map location on Earth’s surface, above where earthquake began. An earthquake actually begins inside the earth at the hypocenter. Learn more!
Animation Novice
Take 2: Plate vs. Crust 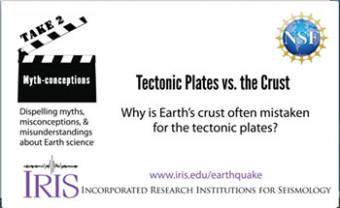 People often use the terms crust and tectonic plates interchangeably. It can be confusing because they are paired, and yet they are distinct from each other.
Animation Novice
Take 2: Magnitude vs. Intensity 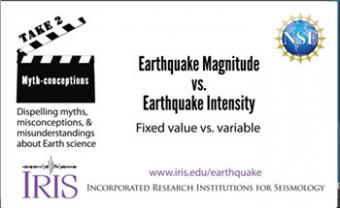 Magnitude and intensity are both related to the size of an earthquake, but they each measure different aspects. One is measured using seismometers; the others is felt. Let's use a lightbulb as an analogy.
Animation Novice