There is a lot we still don’t know about the structure and dynamics of the Earth. Using machine learning and convolutional neural networks (CNNs), both of which train a computer to recognize patterns, I will be using data from earthquakes to investigate the transition zone of the mantle. As we travel down through the mantle, pressure and temperature increase which causes the materials which make up the mantle to change phase. Notable areas where the materials change can be seen around 410km, 660km, and sometimes 520km. Earthquakes travel outward as waves, these waves also travel through the Earth with their speed changing depending on the material through which they travel. Specifically, I will be looking at waves that have bounced off the underside of the transition zone. These waves are called precursors as they arrive before waves that bounce off the surface of the Earth. We are using machine learning and CNNs as they expedite the identification of these precursor signals. The information we gather will be used to better understand the structure and dynamics of the mantle's transition zone.

Whew! There has been a lot going on this past week. We’ve been getting ready to submit our abstract for AGU which has taken a lot of writing and rewriting. We are finally almost there and just in time for tomorrow's midnight deadline.

This summer has taught me a lot. Some of my goals with updates are as follows:

I came into this program with no knowledge of seismology beyond knowing the names of some types. I have learned so much from IRIS and my advisor as well as from seeking out information on the internet.

Goal #2:  Expand my confidence in programming by trying new things and not being afraid of asking questions or not knowing.

So many times this summer, I have proven to myself that I can code. I am still learning and am not the fastest or most knowledgeable, but I have gained skills that will only help me. I have gained confidence in not being afraid to admit that I don’t yet understand something or am uncertain of how/where to start.

This summer has been an amazing learning experience that has taught me a lot not only about myself but also about seismology and computer modeling.

This past week was all about running programs. My advisor Dr. Burdick was on vacation, so I was more in charge of myself. My task was to run a program changing a different parameter each time to see how the models compared to the default. I ran into several problems, including running out of storage, variables changing names between program versions, and having my machine shut off half the way through a run. These wouldn’t be impactful issues, but with each run of the program taking four hours, they added up.

Though I’ve been having a great time and learned a lot, there have been plenty of challenges. The amount of knowledge to even begin on this project has been immense. I started this summer knowing very little about earthquake mechanics and seismology. Learning all I needed to be effective in my internship has been challenging and is an ongoing process. In addition, being in a city where I know no one has been tricky but has helped push me outside of my comfort zone. Even last night, following a trip to the local library, I happened upon a concert and had a great time. Having a positive attitude and being open to new things have helped me this summer.

We’ve made it halfway through!

It's crazy to think that I’ve been here for a whole month and only have a month left. This week we really began to get into data analysis and modeling. We met with our collaborator Lauren Waszek and talked about other potential avenues the project could go. This week I also started working with a program that uses Transdimensional Bayesian Inference. In this program, the computer ‘guesses’ a value to fit a parameter and then compares that to the data. If the guess is close to the data, it keeps the change. If it isn’t close the program starts over with a new guess. There have been a few hiccups in getting started, which is totally expected.

A paper that has been very important in our work is Garcia et Al. (2021) which discusses how a neural network can be used to pick the “S” precursors (the waves that bounced). It was able to show that the quality of the computer-picked data is comparable to when a human picked it. This is important to our project as we are using data picked by a computer with “P” precursors to help determine where discontinuities may exist. (Here is a link if you are interested in reading the paper: [url=https://agupubs.onlinelibrary.wiley.com/doi/full/10.1029/2020GL091658]https://agupubs.onlinelibrary.wiley.com/doi/full/10.1029/2020GL091658[/url])

We’ve made it to the 4th week!

This past week I used a program called TauP to take distances and calculate the time it would take to travel those distances. I then compared that to published ‘S’ * travel times and found that they are nearly identical, the slight differences may have come from using a different model to calculate travel times. After comparing to published travel times, I modified the code such that it would output travel times for ‘P’ waves and then plotted that with data. We were looking to see if the predicted times were similar to the trends when we plotted the data. I also had to filter some of the data as some had a low quality or the error associated with the time was very large.

Here is a quick map of some of the ‘S’ data I made in my first few weeks, 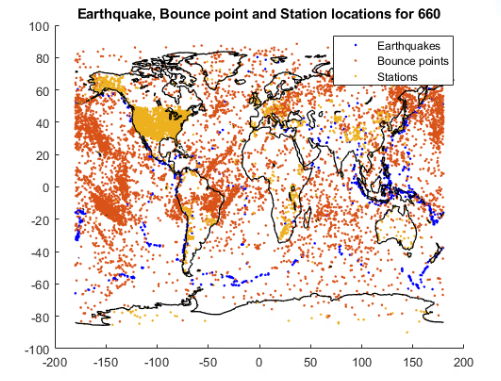 Fig: This figure shows earthquake, bounce point, and station location for waves that bounced off the discontinuity at 660km. The epicenter or origination of the earthquake is denoted by a blue marker. Where it bounced off the discontinuity is marked by an orange marker. Where this wave was detected is marked in yellow. The earthquake epicenters are near plate boundaries and the majority of bounce points occur in the ocean. This is due to where seismometers are and can be placed to detect these signals.

*Just in case you don’t know(hi mom), there are 2 types of waves that travel through the Earth as the result of an earthquake. We call them S and P waves (they can take on other distinctions as they travel through the Earth due to what they pass through, hit, etc). A P wave is the first to arrive and is a compressional wave(think of a Chinese finger trap, how you can compress it and stretch it). An S wave comes second and is a shear wave(think like a wave in the ocean).

This past week has been very exciting, I have spent more time working with programs and making what feels like more genuine progress. I spent a lot of time plotting distance vs time for some of the data we are using to find trends, along with getting a data set into a format that is more desirable to us.

As I have been working on my elevator pitch, I recently had a lot of opportunities to try it out. I was back in Minneapolis last weekend for my brother’s graduation party. I learned that I had to adapt my pitch, catering it to a range of people from those who had never heard of seismology to people who frequently work with geologists.  Though it is not anywhere ready for AGU, I believe I have a good start.

I work in a building called Old Main, which looks like Hogwarts..kinda. I particularly enjoy the courtyard that is just beyond the room where I work. 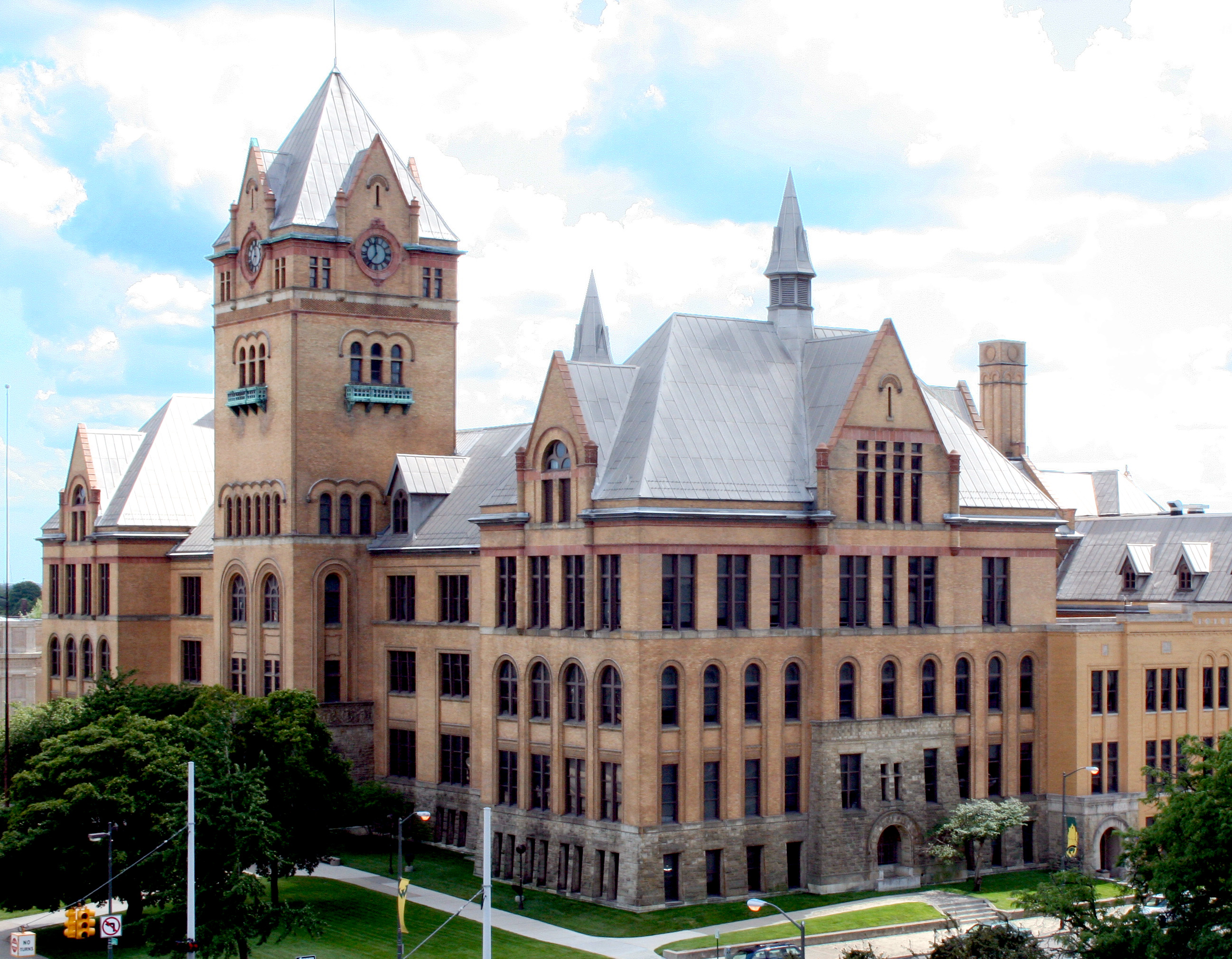 In my second week on campus, I am beginning to settle in a bit more, I have a better understanding of my project and even visited a nearby farmers market! I am excited to keep exploring Detroit as I become more settled into the city.

I will be using a data set from Lauren Waszek, a collaborator from Australia who we are working with. This data is presented in the form of vespagrams which are velocity versus time graphs. Specifically, the data set I am using is only looking at P-waves. This set encompasses data from around the world collected by seismometers. What I will be using(a selected group of data) has not been yet published though the data itself comes from the widely accessible IRIS database.

We were asked to reflect on a skill we wanted to improve on and I have chosen independent working. In research your advisor, if you have one at all, will not be able to be there constantly to answer questions or lead you to the next steps. I have been working on this skill to improve my ability to see the small stepping points within the larger project. I have also made sure to ask questions and advocate for myself when I am having a hard time understanding.

Whew, these first few weeks have been a whirlwind.  Hi! I am Anna, a Physics and Environmental Studies major from Gustavus Adolphus (a small college in southern MN). I became interested in geophysics after taking geology courses, loving them, and thinking of how I could combine my existing enjoyment of physics with it. I am so thankful to IRIS for this internship.

Orientation had us all very busy with crash courses on seismology, data retrival, and analysis. Even though we were very busy we found time to have lots of fun and even some late-night chats in the parking lot of the dorm building. I am very excited to get to see everyone at AGU in December.

After a quick stop at home(in Minneapolis), I made my way to Wayne State University. This first week was spent getting to know the campus as well as my project. I read a good bit of literature and had a good time meeting my advisor, Scott Burdick, as well as some lab mates. We all went out for some non-traditionally flavored pizza, which was fun.

This summer I hope to gain a better understanding of seismology, something I have no prior knowledge of. I want to expand my confidence in programming by trying new things and not being afraid of asking questions or not knowing. I also want to continue my search for grad school, reach out to potential advisors, and begin to set some more concrete plans for the future. I also want to explore Detroit and get to know some of the people here.

Be sure to check in each week for updates on my project!