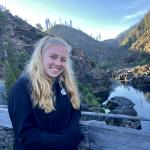 Anneke Avery is a student at Calvin University currently completing her research at South Dakota School of Mines & Technology under Dr. Kevin Ward.

The largest earthquakes and most volcanism on the planet takes place at subduction zones. The subsurface dynamics of subduction zones can be studied using information recorded at the Earth's surface. Typically, this data is limited by the density of stations at the surface or by the availability of seismic waves needed to study the subsurface region of interest. Broadband seismometers can provide a lot of temporal data, but they are usually limited spatially because they are expensive and take a long time to deploy (2 in a day would be impressive). By contrast, three-component nodal seismometers are much quicker to deploy (Dr. Ward's record is 72 in a day in Alaska!) and more cost-effective, so they can be placed closer together. However, because they are battery-powered, they can only record about 30-40 days of data. The introduction of nodal sensors to academia provides an opportunity to investigate the crustal and upper mantle structure of the Alaska subduction zone. In February and March of 2019, 400 nodal seismometers were deployed with 300 spaced 1 km apart along the Parks Highway between Fairbanks and Anchorage, allowing for seismic imaging of the Alaska subduction zone at an unprecedented scale. This project will evaluate if three-component nodal seismometers are capable of imaging a previously studied section of the Alaska subduction zone using receiver functions. For the first time, the viability of using local earthquakes to generate receiver functions from a dense nodal seismic array will be explored. Receiver function imaging is a long-established method for broadband data, but it will now be applied to the relatively new nodal seismic data. The intern role in this project spans a wide range of activities. A highlight is the opportunity to help deploy and recover nodal seismometers in Cascadia. Although this project will not use the data collected in Oregon, the type and scale of the data used from Alaska will be similar to the Cascadia field deployment. Outside of fieldwork, I will learn the background geology and tectonics of the Alaska subduction zone as well as some new studies from the EarthScope array recently completed in Alaska. A large par of the project will be learning the receiver function method as well as working with nodal data and calculating receiver functions. Finally, as I am working in Rapid City, some time will be allocated to explore the unique geology of the Black Hills.

My summer internship began in Oregon doing fieldwork as a part of the Cascadia2021 project (for more information see https://cascadia2020.uoregon.edu). The goal of this project is to better understand seismic hazards in the Cascadia Subduction Zone by modeling the subsurface. We installed battery-powered nodal seismometers (pictured below far left) in the Coast Ranges of Oregon and Washington to continuously record data for about 35 days. These are recording ground motion from earthquakes and background noise as well as signals generated offshore by a research ship. 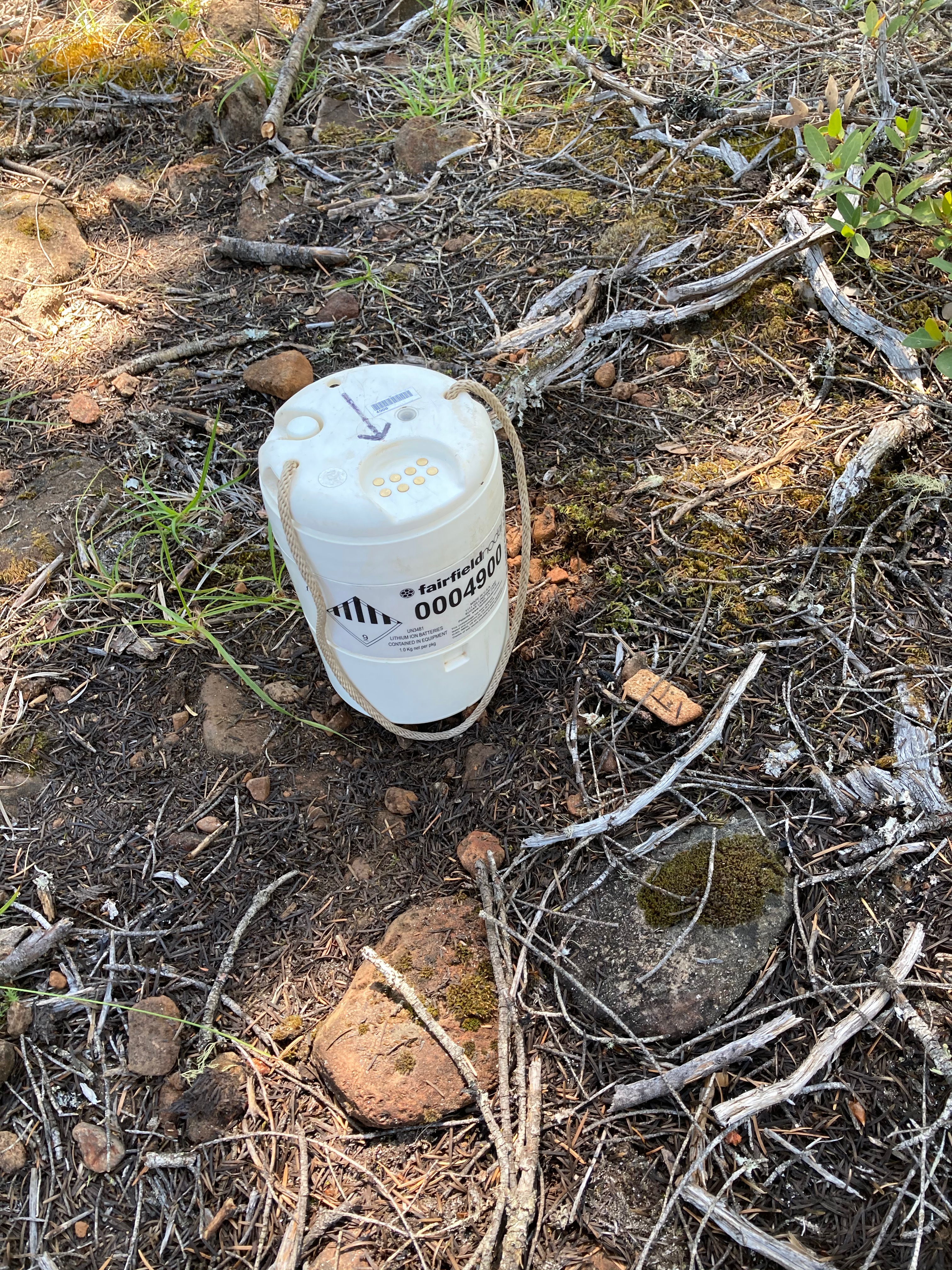 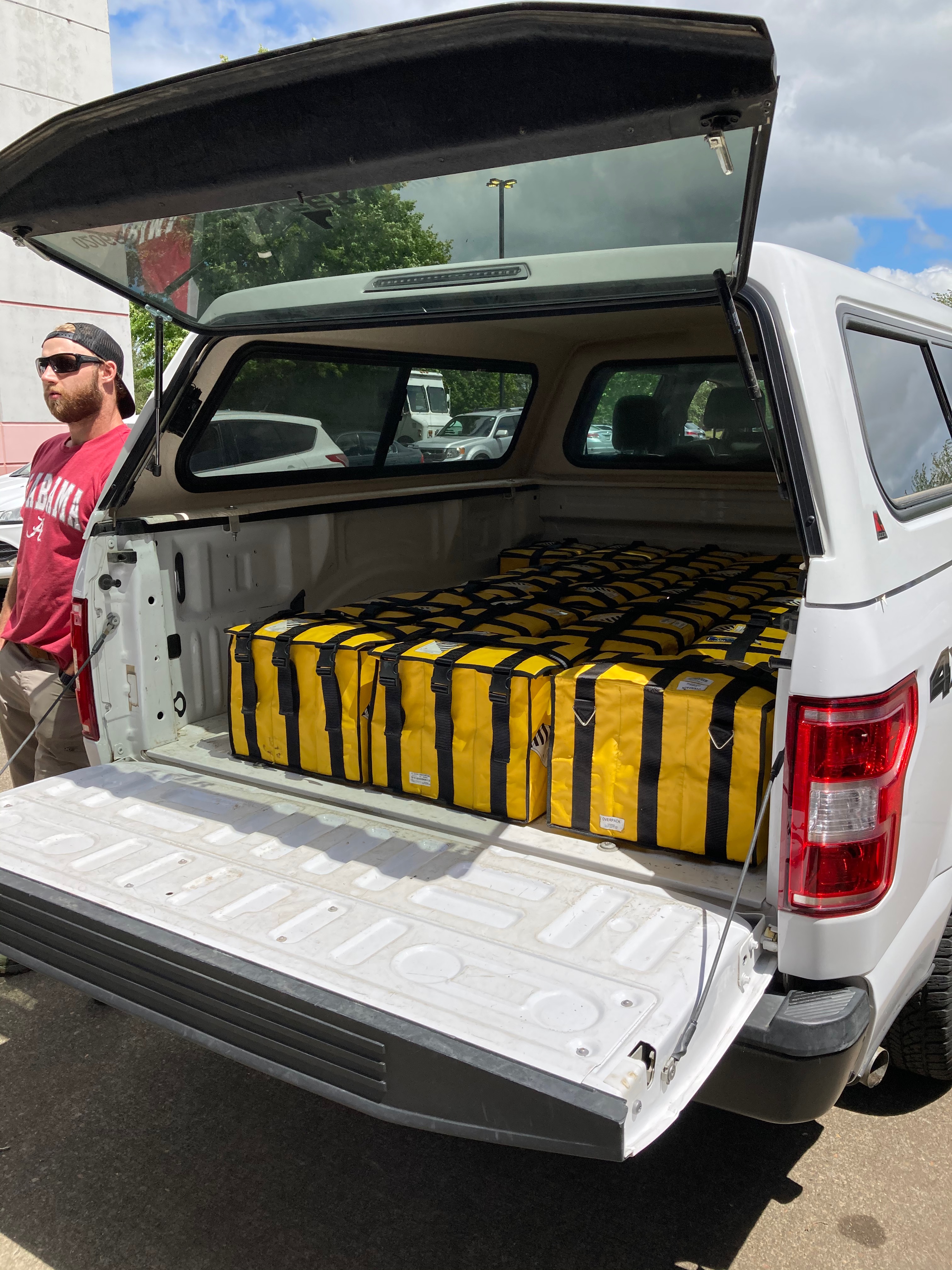 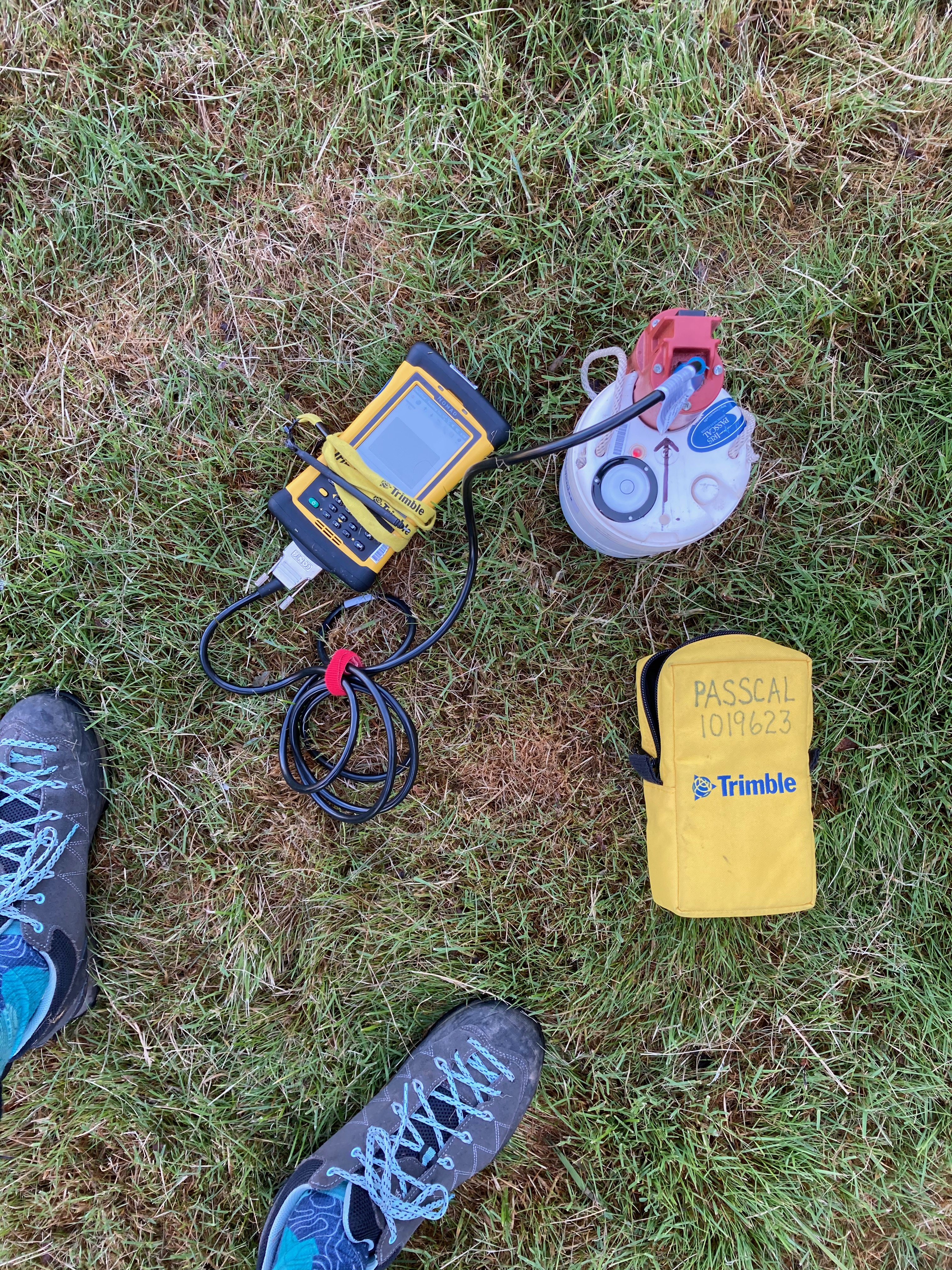 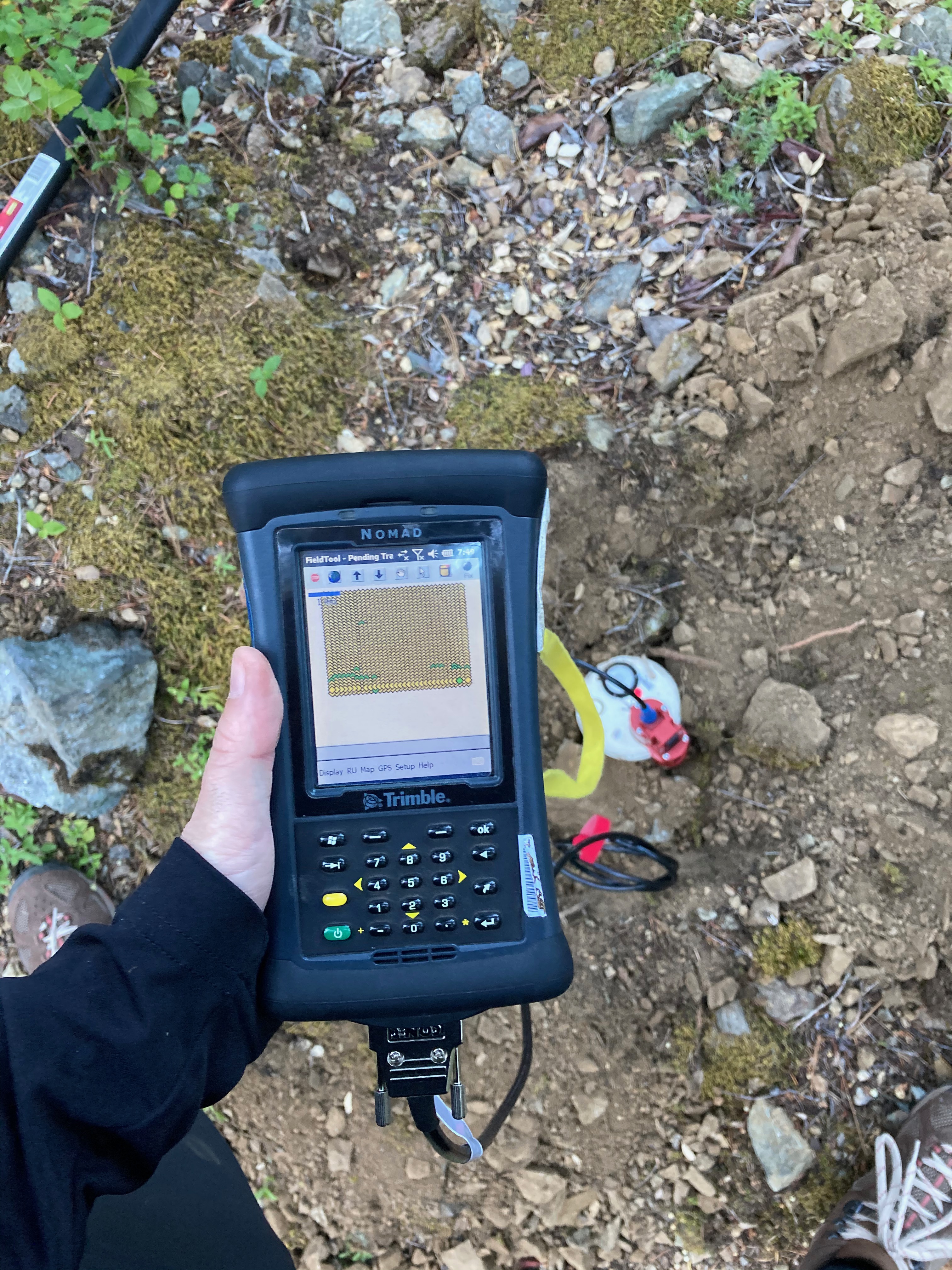 We packed up vehicles with nodes (6 per yellow overpack above) and set off in teams of two throughout Cascadia. We had a grid of over 900 permitted sites to navigate to, often through forest roads without cell serivce, so there was an element of geocaching to it. Barriers such as private gates and unsafe roads prohibitted us from getting to every site. Most of the time, we buried the seismometers under about 4 inches of soil, although sometimes they were placed above ground based on our permits. First, we dug a hole in a relatively flat area away from roads or trails where there would be more noise. This was usually the hardest part because it was very rocky. We then placed the node in the ground, using a bubble level to keep it upright and a compass to orient the top arrow North. Once it was securely in the ground, we connected it to a handheld device (picured above right) which was used to turn on the node. When a node was deployed, the associated symbol on the device grid would turn green (above far right) and the red light on top of the node would start blinking fast. This meant that it was looking for satellites to find its location. Once the GPS was locked, the red light would blink in a heartbeat pattern. We waited to bury the node until it had done several heartbeat blinks because sometimes it would go back to fast blinks before fully locking its location. Then we put flagging tape somewhere nearby the site to mark its location. In field notebooks we took note of the site name/number, latitude and longitude, elevation, node serial number, time and date of deployment, location of the flag relative to the node, and a description of the site. We also used an app to create GPS 'waypoints' for each node's location since the final placement was not the exact same as the planned grid. Then we took pictures pointing at the node (below)! These pictures show the relative position of nearby objects to the node location, which is helpful for finding the exact position when recovering the nodes. In the end, we deployed about 760 seismometers, shown in the map below. 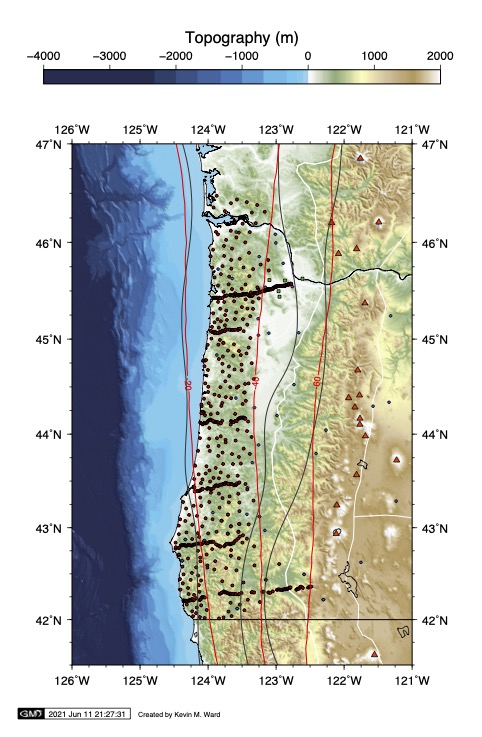 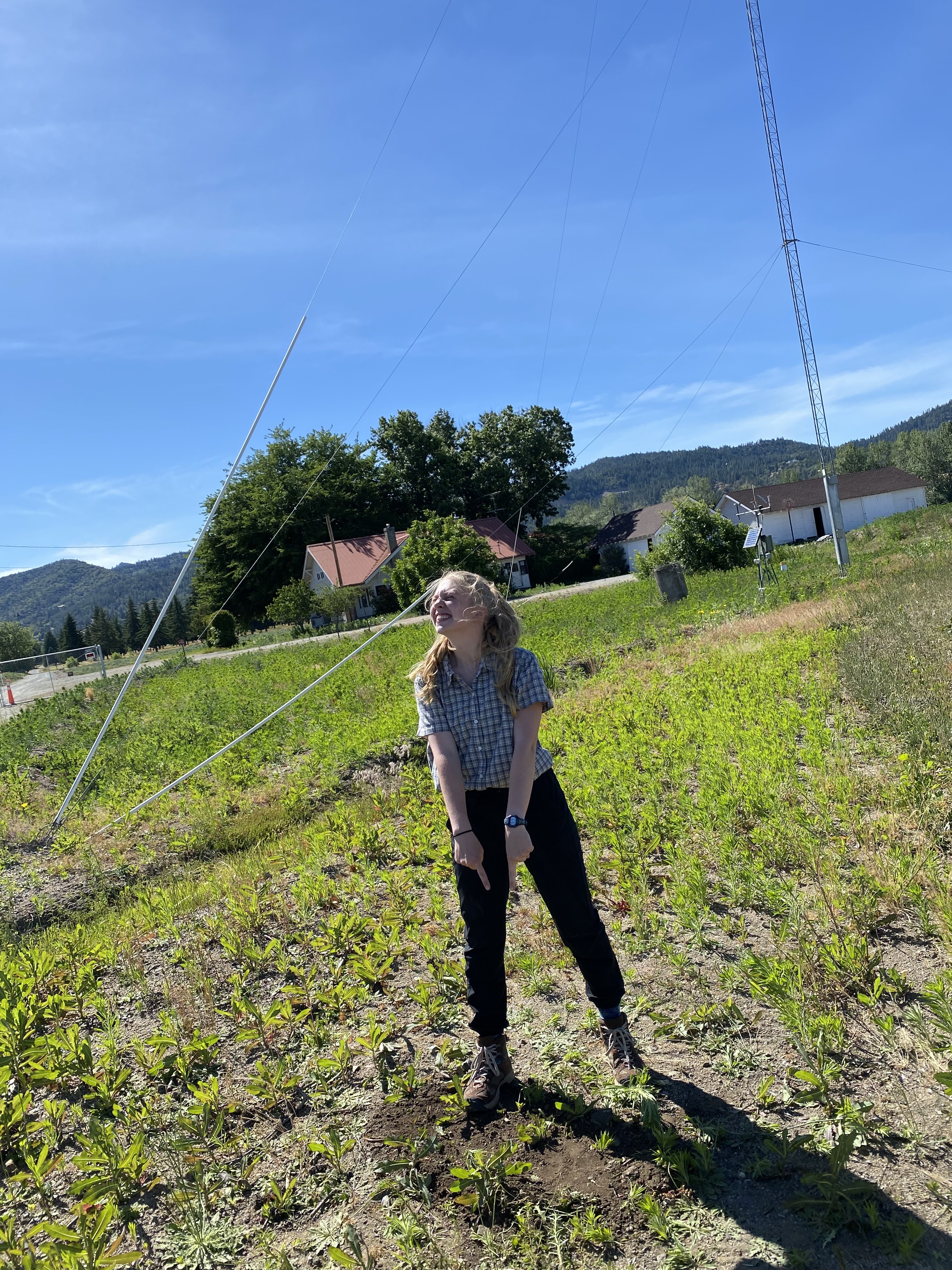 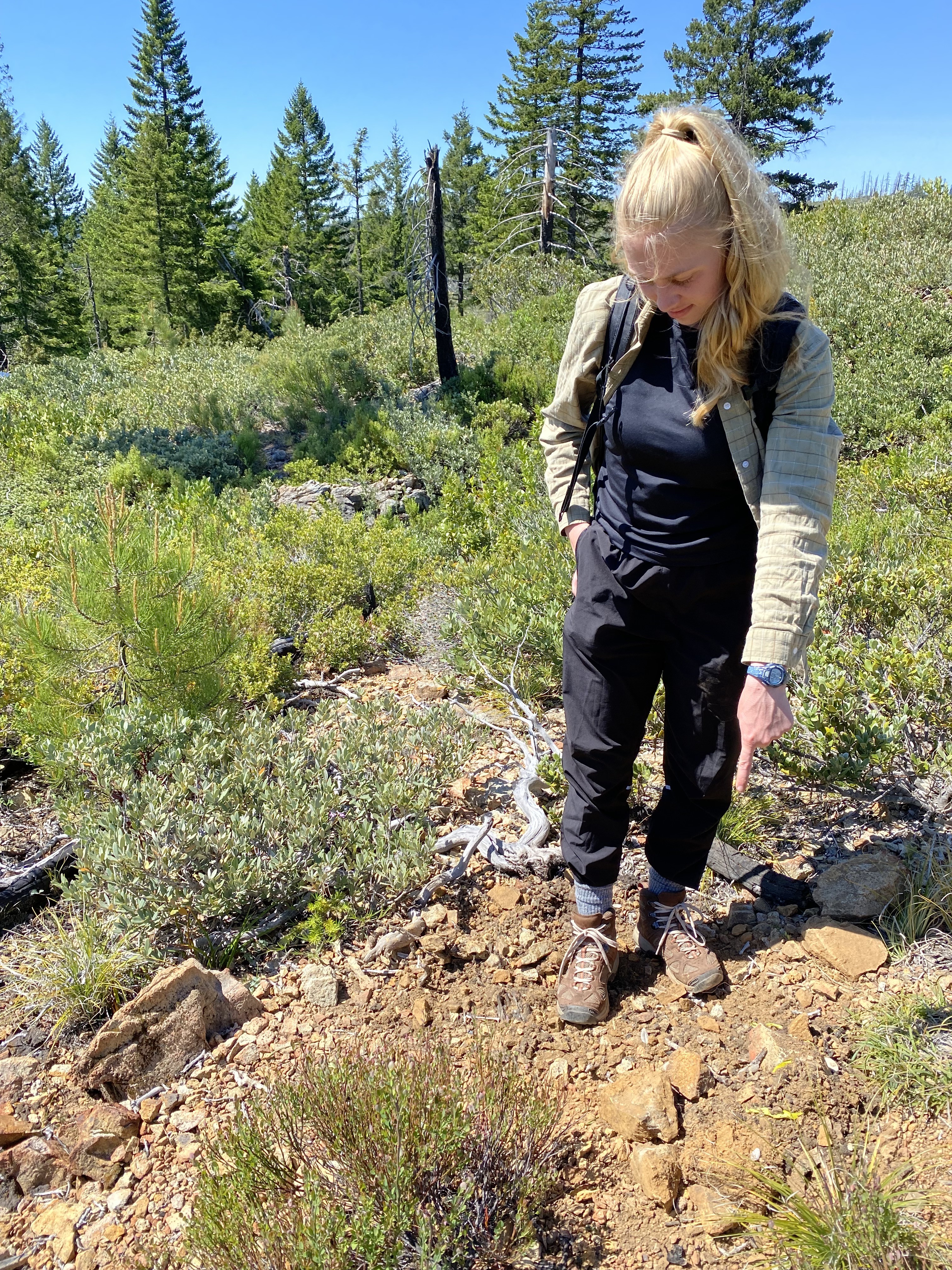 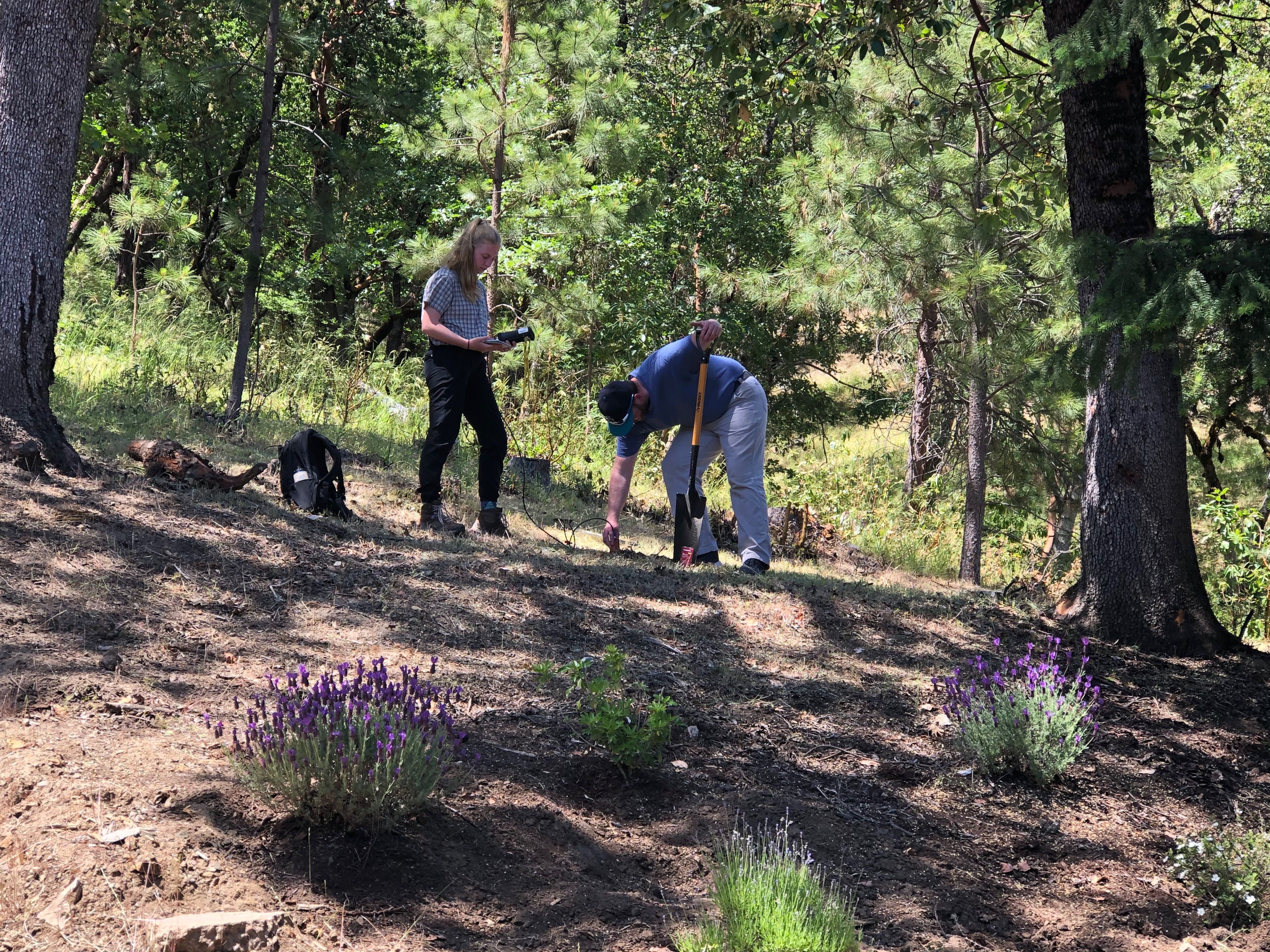 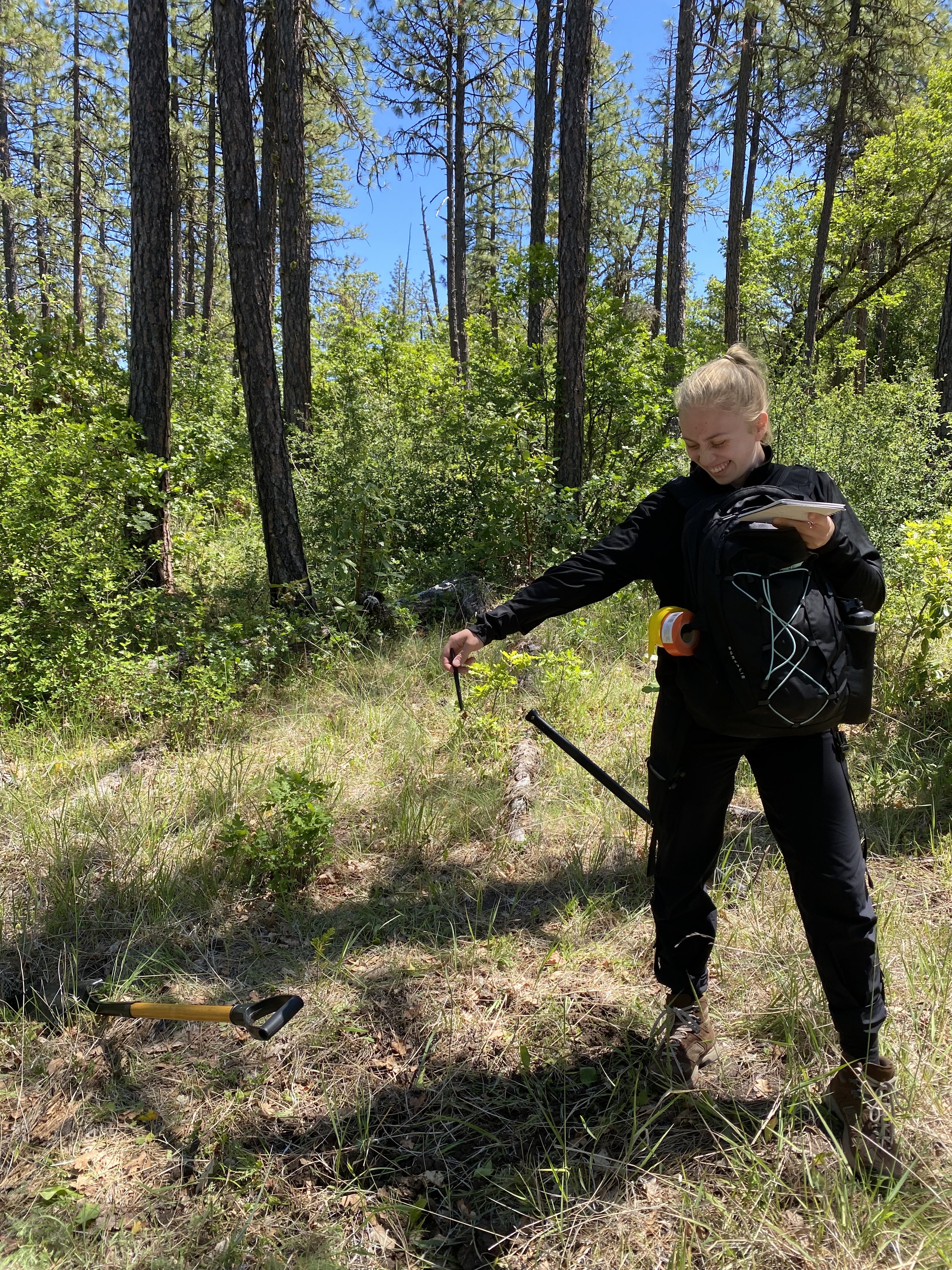 Along the way were many beautiful views including volcanoes, serpentinite rocks, rivers, mountains, lizards, redwoods, enchanted forests, and much more. I will be returning to Oregon at the end of this week to recover the nodes. 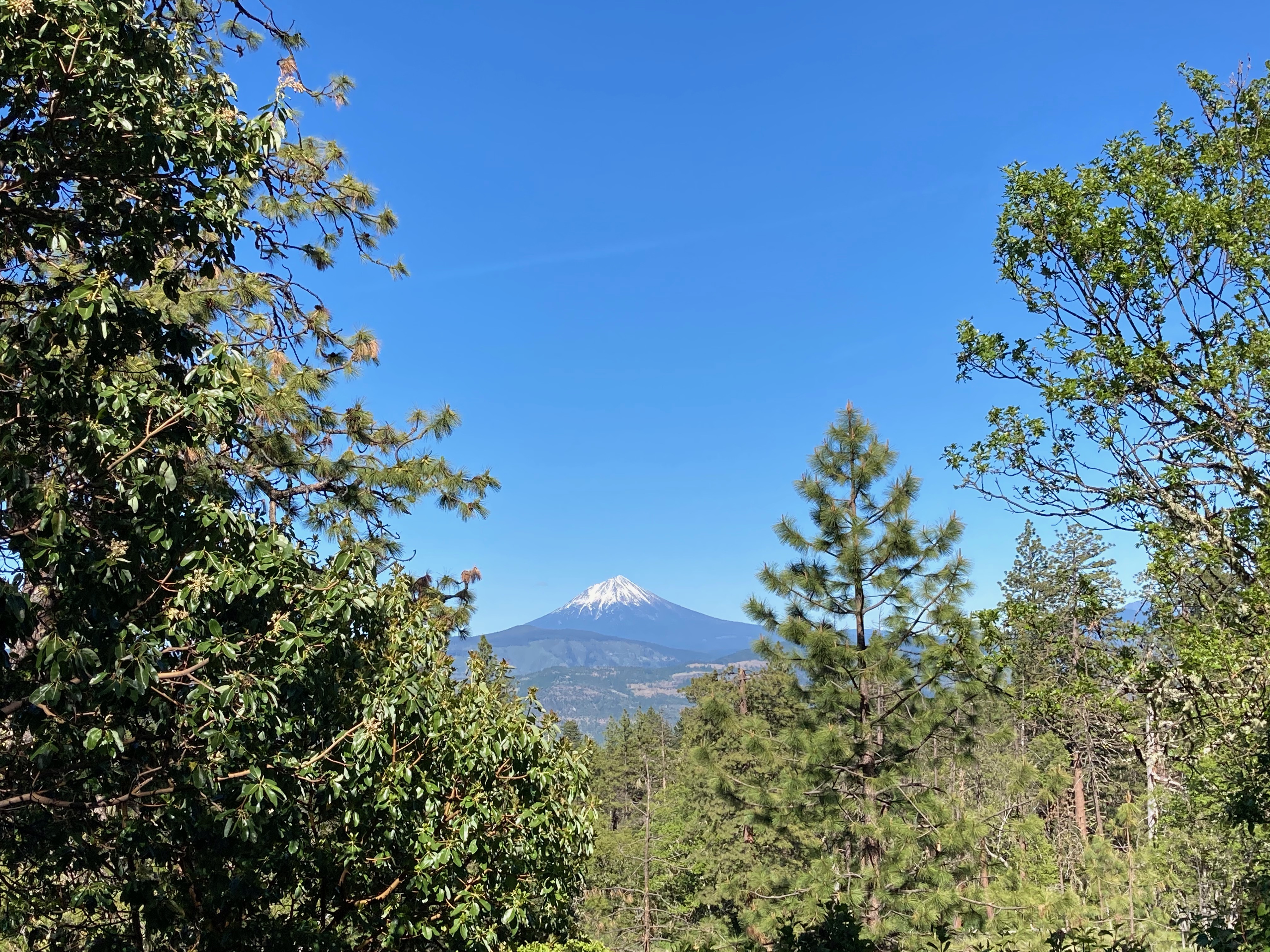 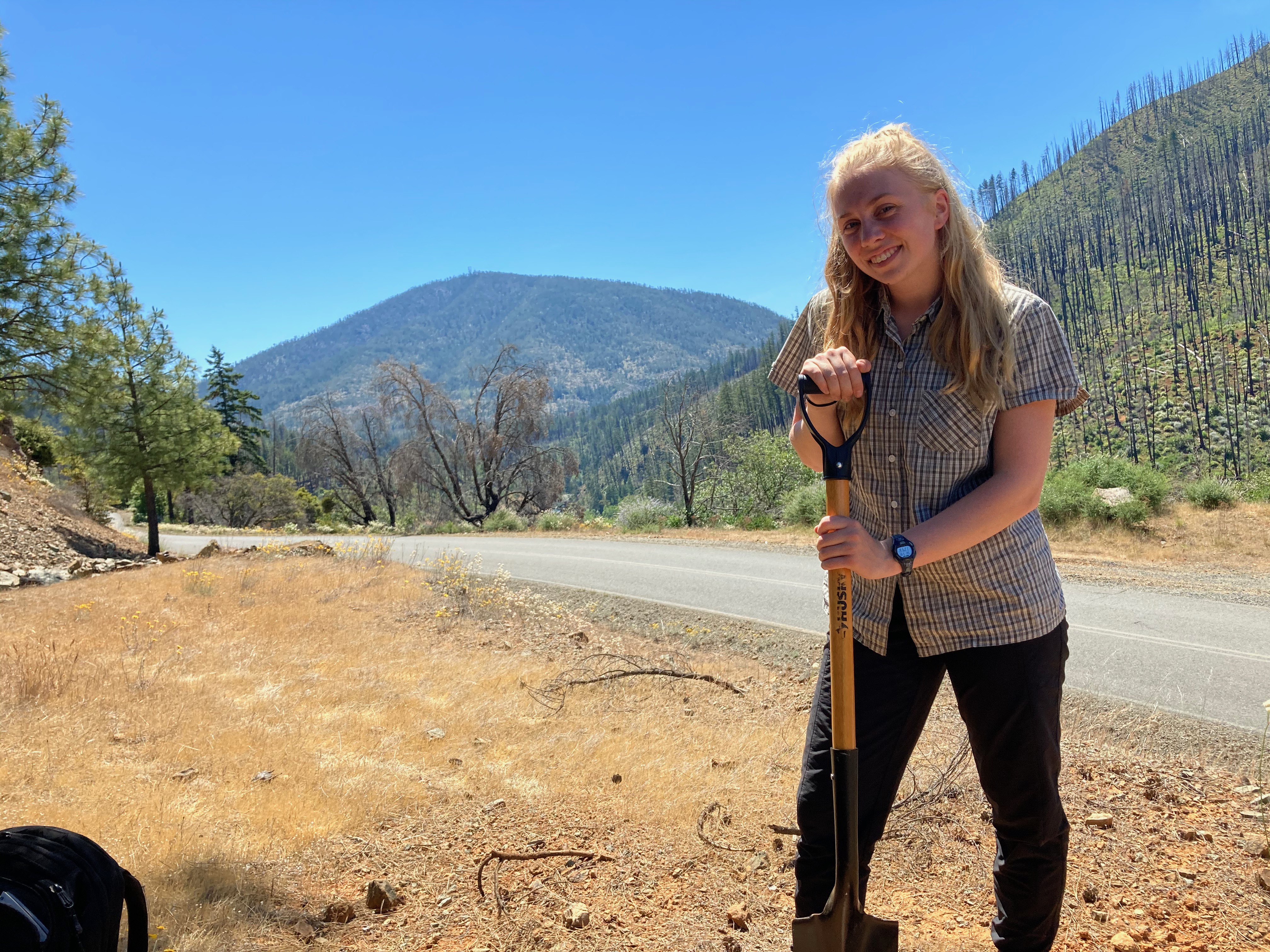 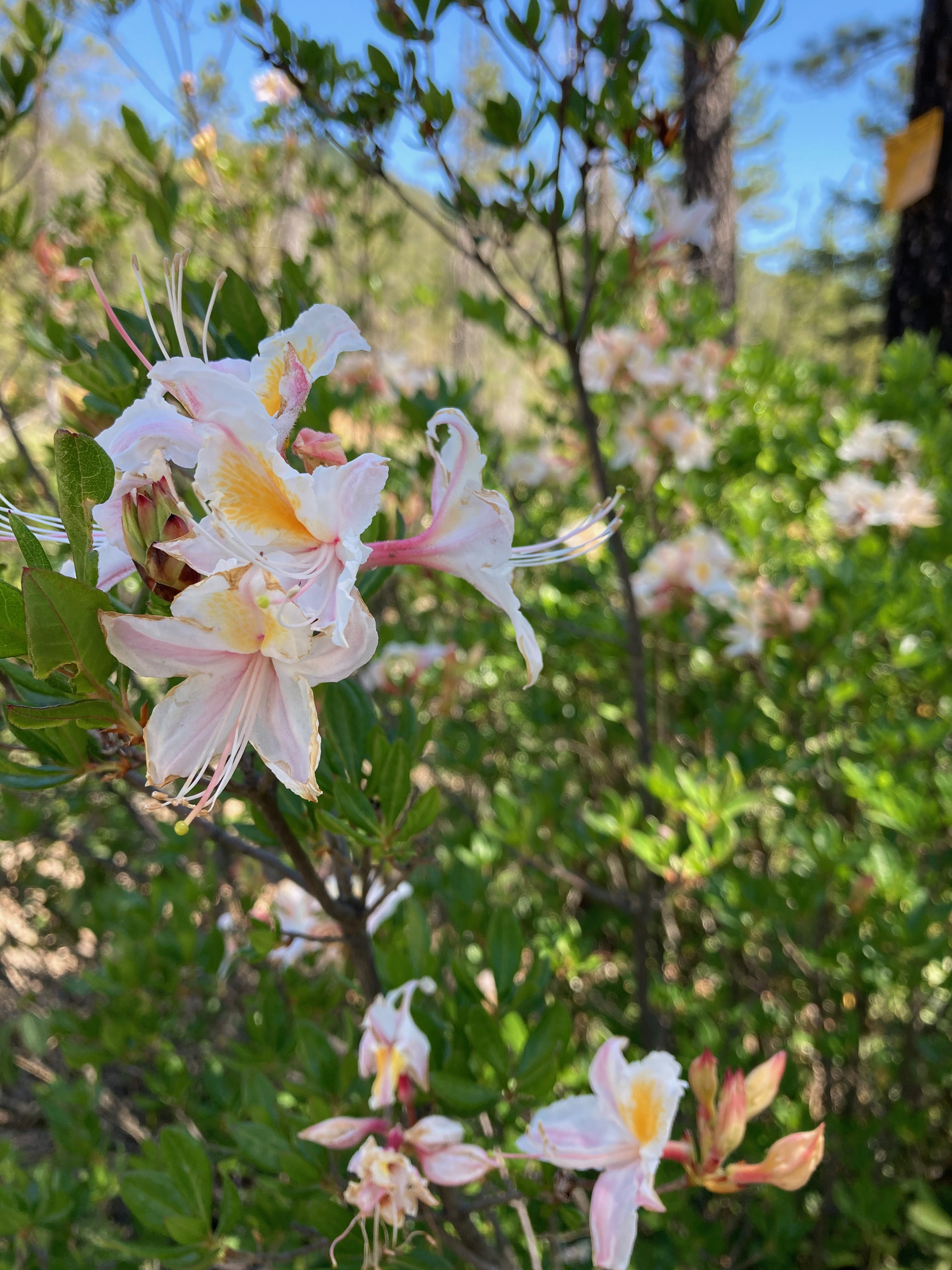 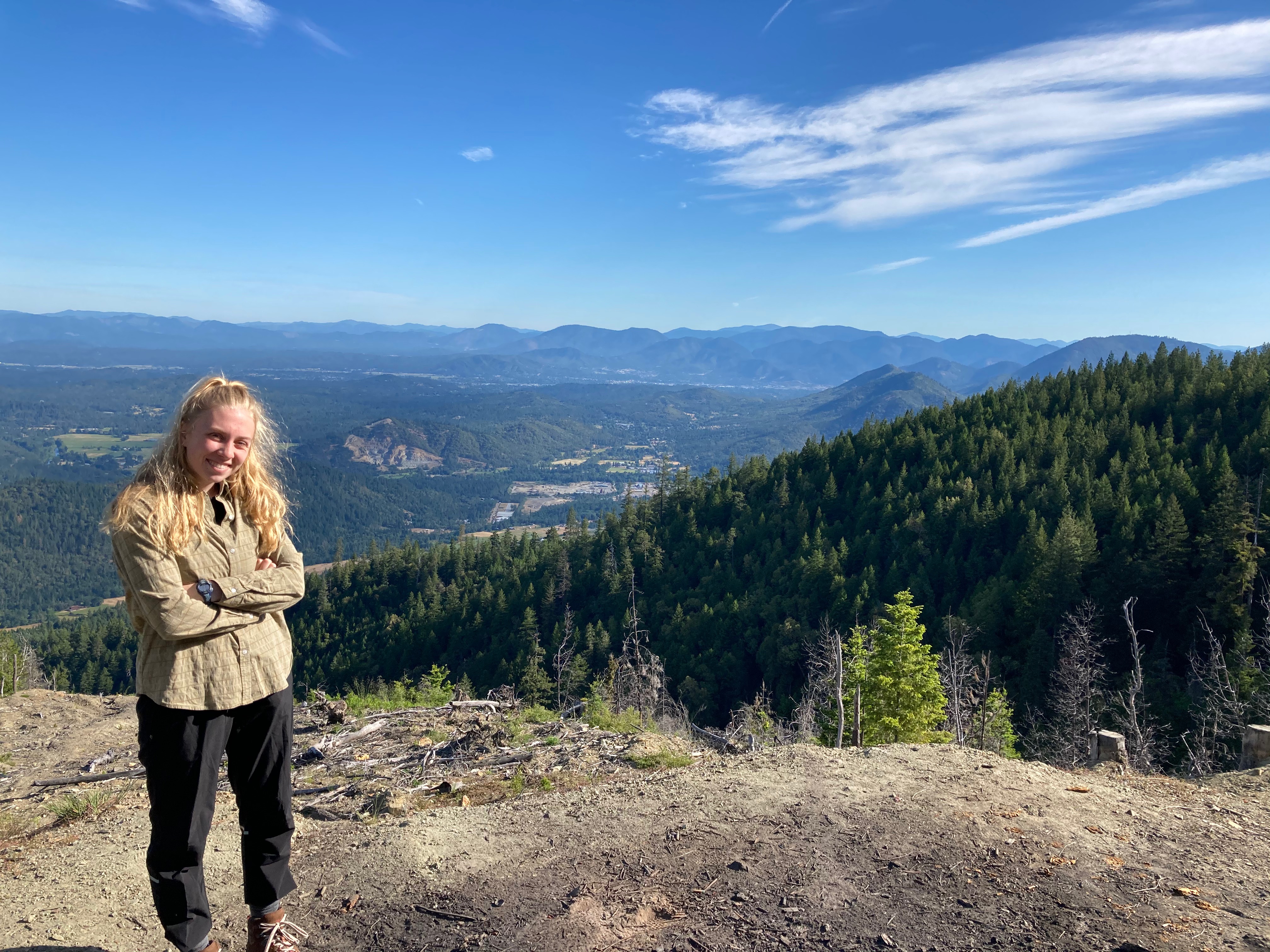 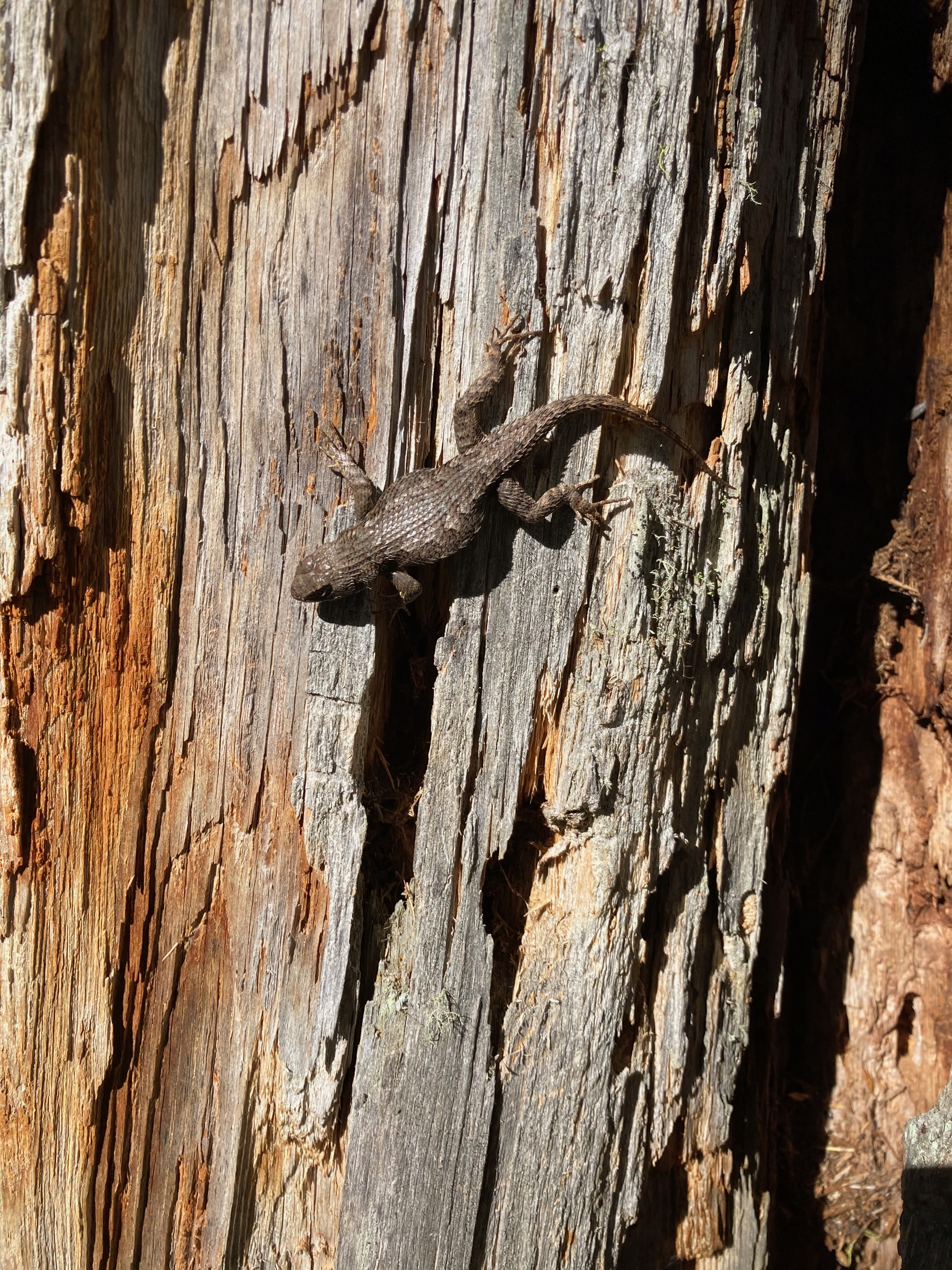 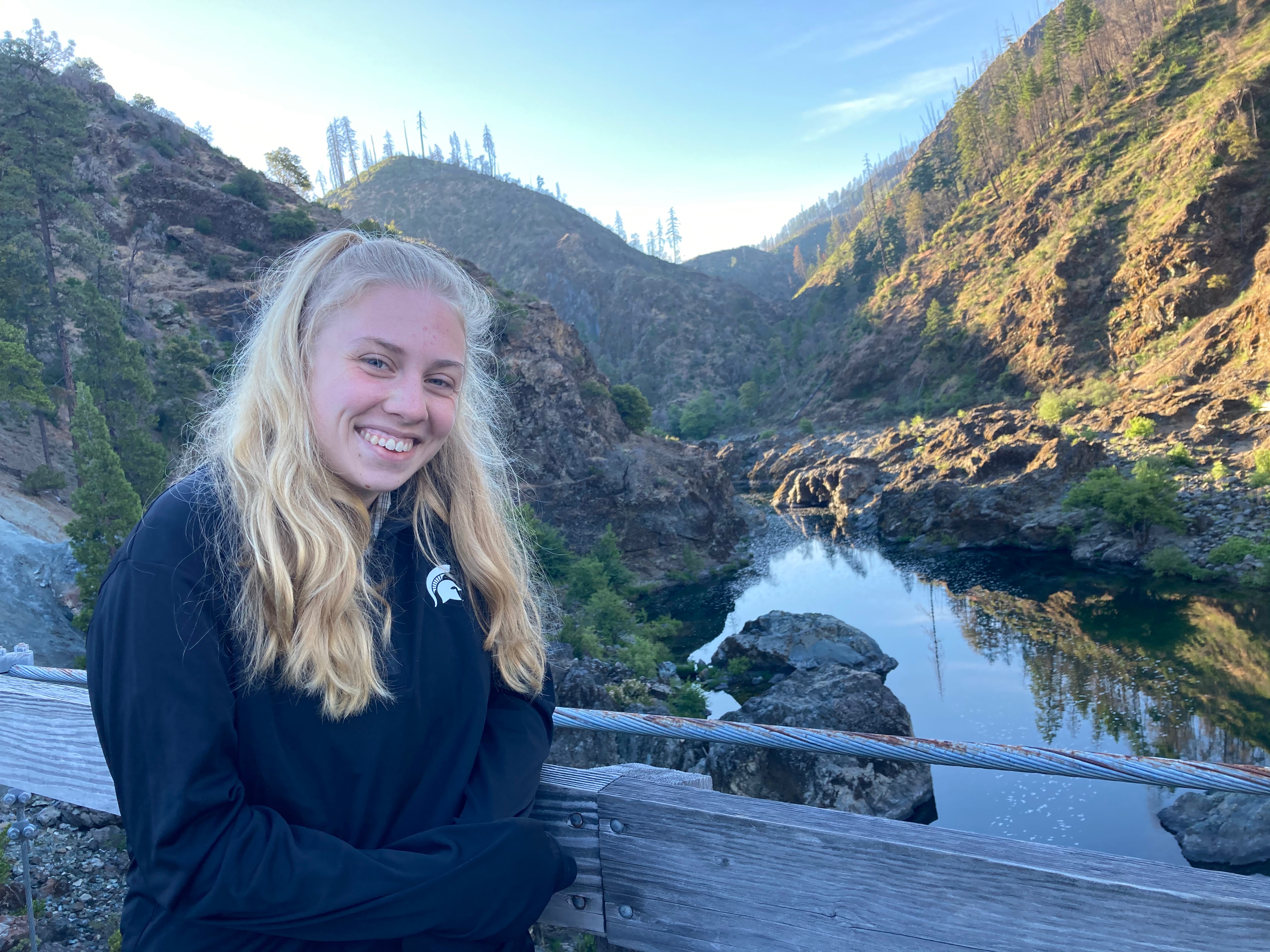 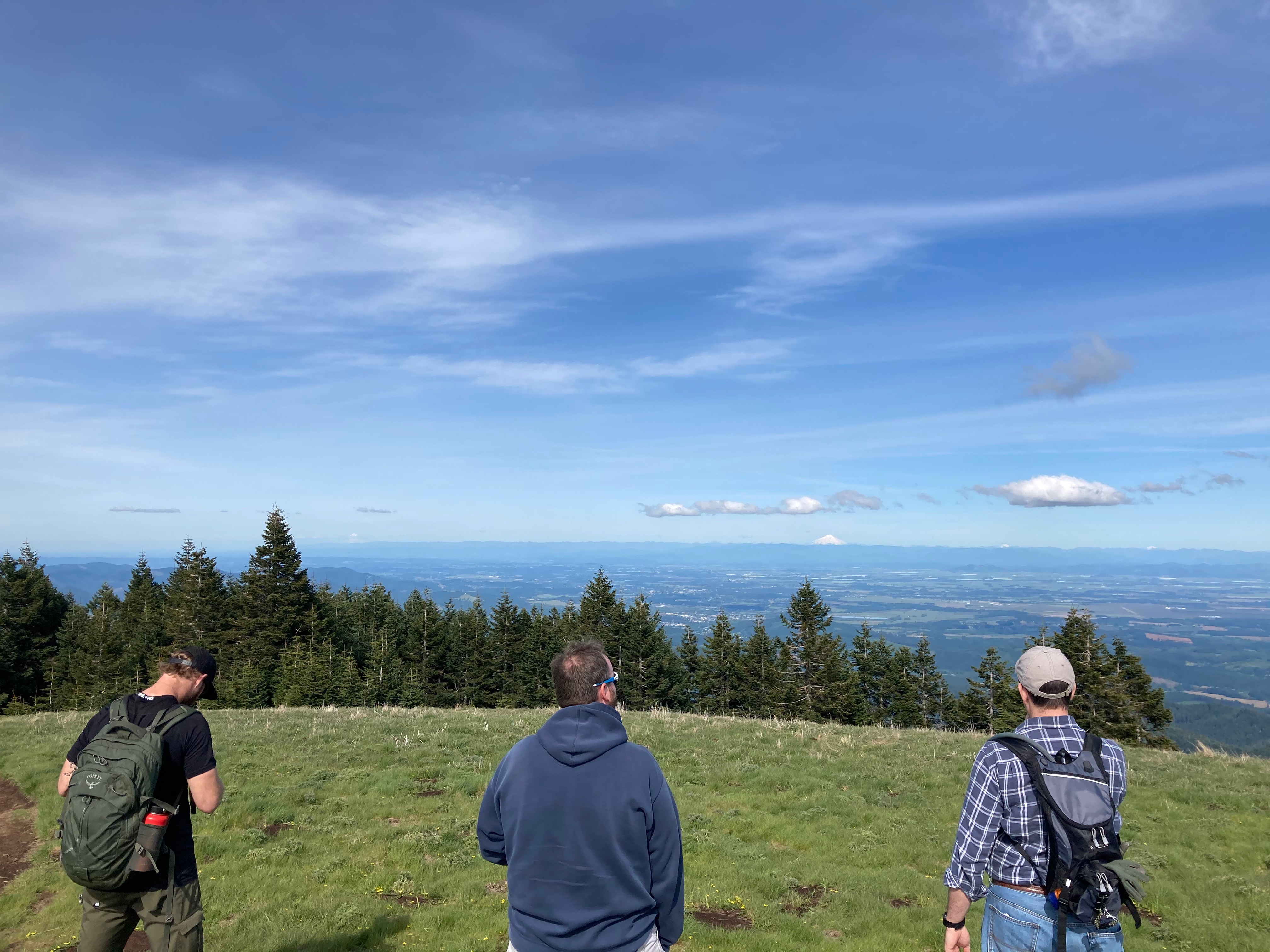 My name is Anneke Avery (Anneke is pronounced like Hanukkah), and I am entering my senior year at Calvin University in Grand Rapids, Michigan, the city where I grew up. I am a physics major and a minor in both mathematics and geology. I hope to have a career in geophysics, so I am excited to have this research opportunity in seismology this summer!

As noted in my project description, I started off the summer traveling around Oregon for a little over a week deploying nodal seismometers. There will be a separate post about this experience soon! Then I went home to Michigan, packed up, and drove out to South Dakota for the next two months. Although I am still in the Midwest, the landscape feels very different. On my way out here, I drove through large stretches of prairie, which I had never seen before! The high winds sweeping the plains is something I will not get used to. The trees here in Rapid City are much fewer and smaller than at home. From my apartment window I can see the Black Hills in the distance, which is a nice change of scenery from the flatness throughout most of the Midwest. The other night I saw a storm develop over the hills from my living room, watching the clouds build and the lightning become more frequent until the parking lot below was flooded with fast pounding rain. The trees were bending in half from the wind and the lightposts were violently swaying. Apparently sudden storms like this are common here because just today I got another weather advisory notification for severe thunderstorms, wind, and possibly large hail! There was not a cloud in the sky at the time, but as I write this the thunder is rumbling, lightning striking, and lamposts swaying.

Now that I am in Rapid City, I have been diving into the background of the research project, reading papers about the tectonic history of Alaska and discussing the context of my work with Dr. Ward. Here are a few goals I have for this summer, which I made on my first day of work in Oregon:

Yes this is a large part of my research project, but as of right now I still know very little about it! My seismology and geophysics experience is limited to the brief introdcutions to tectonics that I have had in introductory geology courses. As I learn this method, work with nodal seismic data, and calculate receiver functions, I hope that I am able to efficiently describe my work and its relevant context. In science, it is important to be able to convey your work to audiences with varying background knowledge. While it is important that I understand what I am doing for a successful project, I also hope to share my work with family, friends, and professors from my home institution as well as at the AGU fall conference in a poster presentation.

Programming is a large part of seismology research! I don't have a lot of computing experience, but it will be important throughout my career. This summer, between the IRIS Seismology Skill Building Workshop and my research project, I will improve upon/be introduced to many computing skills including: Linux, Generic Mapping Tools (GMT), Seismic Analysis Code (SAC), Python, Jupyter notebooks, and MATLAB.

Oh, the joys of field work. I made this goal during field training after hearing about all the dangers and precautions I should take. Poison oak, ticks, and snakes were apparenty the three that stuck for me. On my first day of field work I grabbed branch of poison oak. Oops! I had never seen it before because it doesn't grow where I'm from. Luckily, I was able to wash up after and I didn't get a reaction. After that, I saw it every day of fieldwork in varying forms: bushes, groundcover, vines... I became an expert at identifying poison oak! And it grows EVERYWHERE in the Northwest! I also worked in tall grasses and dry rocky areas where I was likely to get a tick or encounter a snake. I never found a tick during my evening tick checks, and although I heard snakes slither in the grass, I never saw one. This goal will be important again when I go back to Oregon in two weeks to recover equipment.

This is a just-for-fun goal. I am a somewhat new yet avid rock climber, and I brought all of my sport climbing gear to Rapid City in the hopes that I will get to climb outside here. From Michigan I drive 8 hours to Kentucky to climb outside. Now there's tons of climbing basically in my backyard! I got a membership at the local bouldering gym in the hopes of making friends there and going climbing with them in the hills on weekends. In addition to climbing, I also hope to do a lot of hiking and camping while I'm here and explore all the nature nearby (Badlands NP, Wind Cave NP, Custer State Park, etc.).

I will share my various experiences here throughout the summer, so stay tuned!