Waves Generated by Russian Meteor Detected in the US 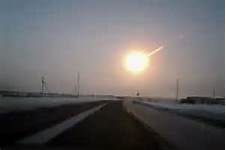 Seismograph stations supported by the National Science Foundation (NSF) to study earthquakes and the Earth’s deep interior observed spectacular signals from the Chelyabinsk meteor. While thousands of earthquakes from around the globe are recorded by seismometers of the permanent Global Seismographic Network (GSN) and EarthScope’s temporary Transportable Array (TA) each year, large meteorite impacts are far less common. However, the meteorite explosion on February 15 near Chelyabinsk, Russia, generated both ground motions and air pressure waves in the atmosphere. The ground motions were recorded by stations in the GSN and the TA, and the pressure waves were detected by special sensors that have been part of the TA station instrumentation for several years.

GSN stations in Russian and Kazakhstan show the ground-traveling wave as a strong, abrupt pulse with a duration of about 30 seconds (Figure 2 at http://www.iris.edu/dms/nodes/dmc/specialevents/2013/02/19/chelyabinsk-russia-bolide-meteor).

The atmospheric waves – referred to as infrasound – are detected over a broad range of sub-audible frequencies and are observed at great distances on infrasound microphones. When the infrasound waves reached the eastern US, after traveling 8.5 hours through the atmosphere across the Arctic from the impact site in Russia, they were recorded at TA stations at the Canadian border. The infrasound waves reached Florida three hours later, nearly 12 hours after the blast. The spectacular TA recordings from the meteor (Figures 9-15 at http://www.iris.edu/dms/nodes/dmc/specialevents/2013/02/19/chelyabinsk-russia-bolide-meteor) show complex signals in the frequency band 0.02 – 0.12 Hz lasting for almost an hour. There is some evidence of the infrasound wave producing strong enough ground vibration to also be recorded on the TA’s seismometers. Infrasound sensors at additional TA stations along the Pacific coast and in Alaska also recorded the blast (Figure 8 at http://www.iris.edu/dms/nodes/dmc/specialevents/2013/02/19/chelyabinsk-russia-bolide-meteor), but with signatures that are shorter and simpler than that recorded by the stations located in the midcontinent and along the southeastern seaboard. The extended duration of the signals and the differences between the waveforms in the east and west are presumably related to the way in which the energy travels and bounces on its long path through the atmosphere. The exact reasons for the differences will be the subject of future studies that may reveal important new insights into the complex structure and mode of propagation in the stratosphere.

Information about the EarthScope Transportable Array

Information about the Global Seismographic Network