Aircraft zoom over oceans. Bolides—another word for meteors—hurtle through Earth’s atmosphere. People mine rocks, blasting quarries to pieces. Sometimes, countries detonate nuclear weapons. Such cacophonous events produce sound waves that travel through the atmosphere. Some of those waves produce infrasound—acoustic waves that travel at such low frequencies (less than about 20 Hertz) that human ears cannot hear them. But snaking across Central and Eastern Europe, a network of infrasound detectors listens.

Born in 2017, the Central and Eastern European Infrasound Network, or CEEIN, involves collaborations between research institutions in Austria, the Czech Republic, Hungary, Romania, and since 2019, Ukraine. Designed to improve knowledge about infrasound in Central and Eastern Europe, this network also facilitates real-time exchange of data both within and outside the group, according to a recent paper published in Geophysical Journal International. This paper serves as the first Central European Infrasound Bulletin, spanning 2017 to 2020. In the future, an annual bulletin will include both natural and anthropogenic infrasound events identified by at least two detectors in the network.

Infrasound around the world

Over the years, several infrasound networks have supplemented the IMS infrasound network. For example, USArray Transportable Array began including infrasound sensors in 2010 as densely spaced seismic stations marched across the United States. The European ARISE project, which focuses on atmospheric processes, involves infrasound, LIDAR, and other complementary technologies.

Only two IMS stations cover the region that includes Ukraine, Poland, Moldova, Romania, Hungary, Slovakia, the Czech Republic, Germany, Austria, Slovenia, Croatia and other countries in Eastern and Central Europe. With CEEIN, which is an extension of ARISE, scientists can better hear smaller shocks that propagate through the atmosphere. 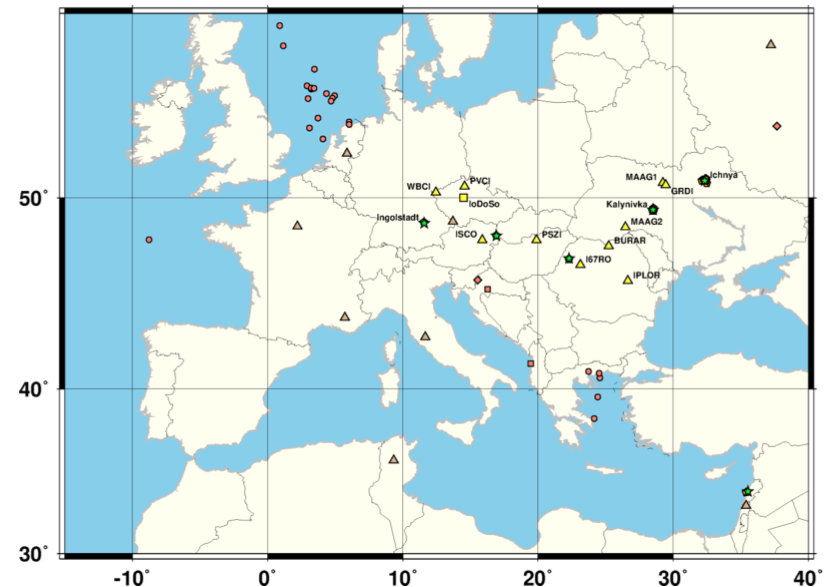 CEEIN includes nine functional infrasound arrays (Figure 1), with a tenth array in Romania that is no longer operational. Each array has between three and six sensors. An Austrian array was deployed for about a week in 2020 to listen to a series of controlled explosions at a military training ground, Allentsteig, in Lower Austria. That array has since been permanently installed alongside a full suite of instrumentation, including seismic, gravity, meteorologic and geomagnetic sensors. Other arrays are sometimes co-located with seismic stations to monitor both sky and ground.

Ambient noise affects how well infrasound arrays can detect the sounds of the atmosphere. Such noise can come from both wind and other repetitive infrasonic sources. For example, the regular belching of gas and lava from Mount Etna can obscure other infrasonic noises. Microbaroms, also known as the voice of the sea, produce infrasonic sounds as marine storms churn the ocean. These ocean-sourced songs can travel great distances in the atmosphere, interfering with other infrasound sources along the way. In particular, microbaroms in the North and South Atlantic, Mediterranean Sea and Black Sea can obscure CEEIN network detections (Figure 2).

Figure 2. In this plot of mean frequency versus azimuth at the BURAR array in Romania, various sources of coherent noise appear as distinct streaks, like microbaroms, Etna’s rumblings, and various oil refineries. Credit: Bondár et al., 2022

Although wind can create noise, atmospheric waveguides, which are high-altitude winds, can change how certain waves propagate high above our heads. For example, a westerly wind—one that begins in the west and blows eastward—might improve waves traveling eastward in the same direction. On the other hand, such winds might dissipate westward-propagating sound waves. Because such winds change seasonally, infrasound sensors can sometimes detect sources at great distance, and other times hear mostly local noises. Supplementing the IMS stations with CEEIN arrays has improved the ability to listen for atmospheric disturbances during all seasons of the year, and helps identify weaker infrasound sources while facilitating more accurate locations.

Accurately locating the source of an event relies on CEEIN detections, along with infrasound and seismic information collected from other networks. Some events in the CEEIN bulletin were identified using iLoc, an open-source earthquake location algorithm that can be downloaded from the IRIS software repository.

Other naturally occurring events picked up by the CEEIN network include three instances in which meteors entered Earth’s atmosphere. These bolides hurtle from space to ground producing sonic booms that include an infrasound component.

One such fireball unfurled near Lipetsk, Russia in 2018, observed by seventeen infrasound stations in total, seven of which are part of the CEEIN network. Two CEEIN stations recorded the Bering Sea bolide that fell in December of 2018, which scientists initially thought satellites may have missed. A third meteor shot through the sky near the Croatian-Slovenian border in 2020, detected by both infrasound and seismic stations, including four CEEIN detections.

Infrasound arrays also detect anthropogenic sources, like the sonic booms of aircraft traveling at supersonic speeds the oceans. Forbidden to travel faster than the speed of sound over land because of the noise nuisance and potential damage, jets capable of traveling such speeds typically do so over the oceans, like the North Sea and Aegean Sea. Because Eastern and Western Europe often experience different weather systems, CEEIN stations can assist such tracking supersonic noise when western arrays are besieged by high winds.

On land, humans often quarry rocks by blasting explosive underground. Many such shatterings were recorded by single CEEIN arrays, but because such events were local, they’re not included in the bulletin. However, some quarry blasts in Austria and Romania blasts were large enough to be detected by more than one station. Other similar bursts of sound include the the Ingolstadt oil refinery explosion in Germany in September of 2018, and the August 2020 explosion of ammonium nitrate stored in Beirut’s port.

The first CEEIN also includes two explosions at Ukrainian ammunition depots. The first, in Kalynivka, a town in western Ukraine, began on September 26, 2017. The event was recorded as a series of explosions by both the infrasound network as well as a local seismic network. The next year, another series of explosions at a military warehouse commenced in Ichnya, Ukraine, east of Kyiv, on October 9, 2018.

Because of the Russian invasion of Ukraine, those responsible for running Ukraine’s three infrasound arrays are currently defending their country, says István Bondár, a scientist at Institute for Geological and Geochemical Research, Research Centre for Astronomy and Earth Sciences in Hungary and first author of the new paper. The CEEIN network recorded the Russian bombardment on February 24, 2022 that began the war.

For now, the last infrasound records received from the Ukrainian arrays came through on March 4, 2022, says Bondár. If these networks are still functional, they may still be documenting the sounds of missiles and bombs.