The mystery of the missing plume head

Deep within Earth's mantle, hot material rises upward from several fixed locations. According to the mantle plume hypothesis, these features, called plumes, sometimes burst through the ever-moving tectonic plates that form Earth’s outermost rock layer. In the classical version of this idea, when a nascent plume begins to punch through a tectonic plate, the plume head is more than 2000 kilometers wide, resulting in a broad area of uplift and copious amounts of lava pouring from the torn crust. The final landform of mantle-derived basalt is aptly named a “large igneous province” – a plateau of basalts on Earth’s surface. Examples of plateaux thought to have formed this way include the underwater Ontong-Java oceanic plateau in the southwestern Pacific Ocean and the above-ground Deccan Traps in India. After the outpouring of lava from the plume’s initially giant head, the much smaller tail, merely 200 kilometers wide, continues to push lava upward, creating a chain of volcanoes behind the plateau. These volcanoes progressively decrease in age away from the plateau—a crucial observation that reflects the nature of the fixed mantle source and moving tectonic plate. 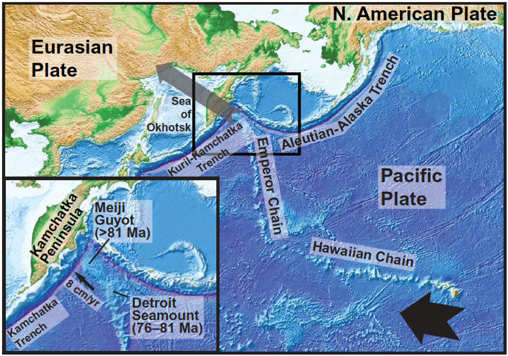 The Hawaiian-Emperor seamount chain—arguably the most famous chain of volcanic islands in the world—appears to have formed this way. However, the Hawaiian mantle plume head and corresponding oceanic plateau are gone. Some researchers believe that the hypothesized plateau accreted to the Kamchatka forearc, providing a means by which to grow continental crust. On the other hand, seismologists and geodynamicists suggest that this massive ocean-floor feature likely subducted, potentially causing tectonic plates around the world to change direction. Now, researchers led by Songqiao Shawn Wei at Michigan State University may have discovered the Hawaiian-Emperor seamount chain's preceding plateau—or at least part of it—in the uppermost portion of the lower mantle under Siberia (Figure 1).

The active volcanoes on the island of Hawaii, including the currently erupting Kīlauea and the new Lō’ihi seamount, form the youngest part of this chain. The Hawaiian islands extend to the northwest, with each isle older than the last. Below the waves, seamounts —submarine volcanic mountains that do not breach the ocean’s surface—continue the northwestern progression for approximately 2500 kilometers. Then, a sharp bend reorients the chain northward, creating a pattern that looks like a crooked tail of islands, atolls and seamounts with no plateau leading the charge. According to scientists who use plate reconstructions to rewind the movements of tectonic plates, the almost 90° kink corresponds to a change in the motion of the Pacific Plate that occured ~47 million years ago. The long-dead submarine volcanoes that form the north-trending Emperor seamounts stretch northward through the Pacific Ocean, straight into the Kamchatka Trench off the eastern coast of Russia. Currently, the oldest portions of the chain—the more than 81 million year old Meiji Guyot and the 76 to 81 million year old Detroit seamount—are poised to plunge into the subduction zone.

If the oceanic plateau was subducted then it should be somewhere below northeastern Siberia. Typically, scientists would use high resolution tomographic images, or geophysically-derived snapshots of what Earth looks like under the surface, to look for evidence of the plateau. But that method, Wei says, cannot resolve the difference between a 35-kilometer thick plateau versus average 6-kilometer thick oceanic crust at such depths below Siberia because this desolate region lacks enough seismic data. 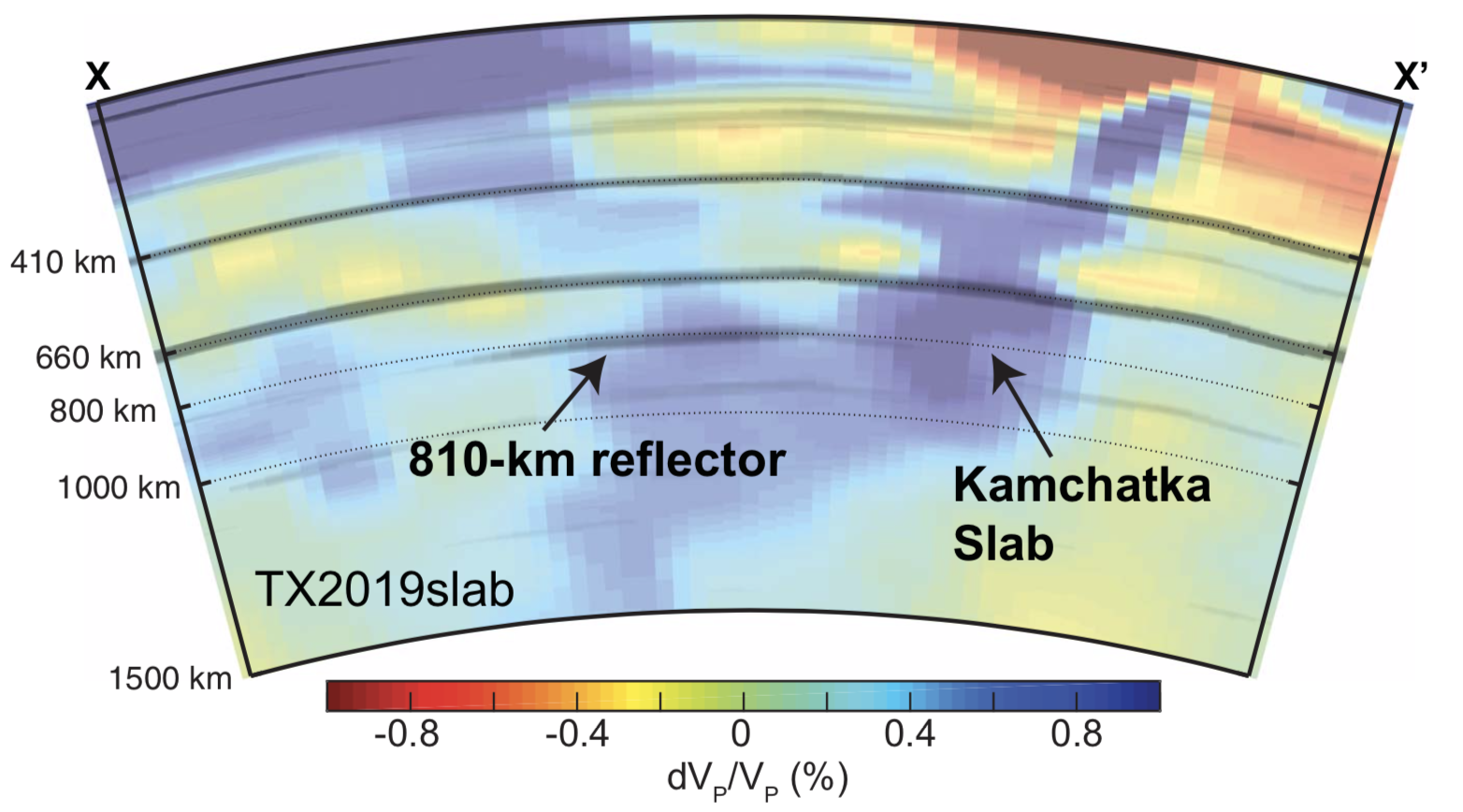 Wei and his colleagues compiled 45 years-worth of globally collected seismic data selected from the IRIS Data Management Center. The millions of seismograms came from many networks, including the Global Seismographic Network.

To extract information from this voluminous dataset, Wei and his colleagues “stacked” the data, which means they added together different seismic records, improving the overall data quality by reducing the noise. They focused their efforts on a feature located approximately 810 kilometers deep, called the 810-kilometer reflector (Figure 2). In deep-Earth seismology, the presence of a reflector -- a feature that reflects seismic waves -- typically indicates a mineralogical phase change.

This curious lower-mantle reflector appears to be 1000 kilometers wide, but directly constraining its thickness isn't possible, says Wei. Instead, Wei and his colleagues tested a variety of crustal thicknesses in their mineralogical models. "A normal 6-kilometer-thick oceanic crust cannot explain the [810-kilometer reflector], he says whereas “a thicker ocean crust, as thick as the Ontong-Java Plateau crust, can better fit our [observations].”

For researchers scouring the lower mantle for subducted oceanic plateaus, this work provides a roadmap for how to accomplish that goal by combining seismic imaging, mineralogical simulations and plate reconstruction, says Wei.

“This discovery,” says Wei, “provides spatial and temporal clues of the Hawaiian plume's early history.” Given current plate reconstruction models, Wei and his colleagues hypothesize that the Hawaiian plume head that gave rise to this lost oceanic plateau breached the surface approximately 100 million years ago. By assuming a slab dip angle of 50° and a constant rate of subduction for the Pacific Plate—today’s rate of 75 mm per year—the suspected oceanic plateau would have descended into the Kamchatka Trench between 20 and 30 million years ago. This is well after the suggested 47 million year old bend in the Hawaiian-Emperor seamount chain, which implies that the subducting plateau cannot explain the sudden, drastic change in Pacific plate motion at that time.

So did the Hawaiian-Emperor plume not only record plate motion, but also change it? Perhaps not, but this proposed snapshot of a subducted oceanic plateau will help scientists refine their plate reconstruction models, an imperative step to disentangling the geography of the geologic past.

Figure 1. Bathymetric and topographic map of the Northwestern Pacific Ocean and Northeast Asia showing the Emperor–Hawaiian seamount chain. The black arrow shows the current direction of motion of the Pacific Plate and the grey arrow shows the subduction direction of the of past chain into the Kamchatka subduction zone based on plate reconstructions. The inset shows the oldest seamounts still exposed on the ocean bottom – the Meiji Guyot and Detroit Seamount are about to subduct into the Kamchatka trench. Credit: Wei et al., 2020.

Figure 3. Bathymetry of Pacific Ocean today, with the island of Hawaii, the kink in the Hawaiian-Emperor seamount chain, and the subducted seamounts labeled by age. White arrows show age increasing with distance away from the active plume under the youngest Hawaiian islands.   Cartoon inset on the right conceptually shows Hawaiian mantle plume today. Cartoon insect on the left shows conceptual model from Wei et al., with Pacific plate plunging beneath Eurasian plate at the Kamchatka trench. Earthquakes (yellow stars) delineate the top of the plate to mid-mantle depths. In the lower mantle, the plate flattens with the thick oceanic plateau residing at the location of the 810-kilometer reflector. Credit: Songqiao Shawn Wei