(by Kasey Aderhold and reproduced with permission from the EarthScope Newsletter)

Sparking to life on June 13 after a dry spring and early summer in 2015, the Sockeye Fire swept through the Alaskan community of Willow, reducing thousands of acres to cinders. Tucked among the 55 homes destroyed in the fire was a brand new seismic station installed only a month before, as part of the Alaska Transportable Array (TA) deployment. A spike in temperature at 6:20 a.m. on June 15 signaled the last moments for the original M22K. After the surprisingly small amount of melted remains were cleared away, a new station M22Kwas installed in late summer 2015, with solar panels now in full sun and its clean gray hut standing in stark contrast to the charred remnants of black spruce.

In 2015, IRIS field crews installed or upgraded 39 stations while dodging wildfires. In 2016, they were faced with installing a daunting 72 new stations, as well as servicing a number of previously built stations that required fixes to power-system vulnerabilities. Luckily, 2016 proceeded with fair weather and few setbacks. Equipment and crews traversed thousands of miles to build or improve stations from the northernmost part of the Arctic National Wildlife Refuge to the southern tip of the Alaskan Panhandle, and from the western Aleutian arc eastward to the McKenzie River Delta of Canada’s Northwest Territories. 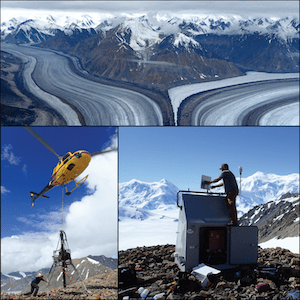 With three installation crews and three drill rigs that all move around the state simultaneously and independently, there are bound to be a few hitches. Teamwork and flexibility are critical for achieving the project’s goals. Warehouse specialist Crystal Tingook enforces inventory system procedures that streamlines preparations for deployments; Recon LLC., a seasoned local outfit attuned to project-halting quirks of Alaska, handles logistical operations; the Array Network Facility staff archives data from the stations that collectively have an impressive 94% return heading into the winter months; and the PASSCAL Instrument Center tests equipment at its warehouse in Socorro, New Mexico before shipping it to Alaska.

As 2017 dawns, the stage is set for the installation of the final 73 stations that will be located primarily in sparsely populated western Alaska. Isolated from main roads, crews will have to prep equipment in camps and rely more heavily on non-automotive transportation methods. This likely means they will be out in the field for longer periods. However, while they will still need to contend with special power or communications considerations for so-called “snowflake” stations with unique requirements, technicians now typically work with near-identical stations, leading to more efficient installation. 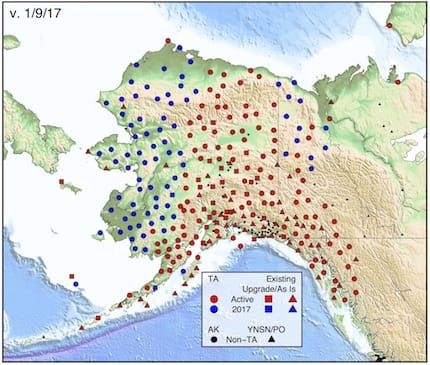 The Alaska TA is operated by IRIS as part of the EarthScope Project for the National Science Foundation. All data from operating seismic stations is available from the IRIS Data Management Center.