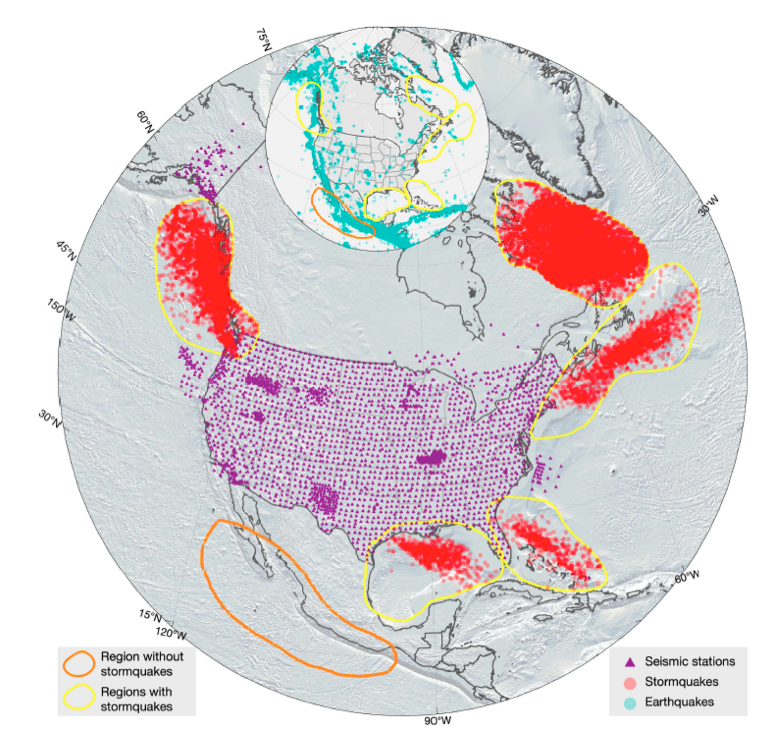 Around the world beachgoers and seafarers are mesmerized by the sea, often not realizing that gentle waves on the surface of the ocean are driven by wind. The windier the weather, the bigger the waves. In fact, violently windy storms like hurricanes generate waves that are so intense they are detectable by seismometers.

From atmosphere to ocean to Earth

Wenyuan Fan, assistant professor at Florida State University and lead author of this study, says that “stormquakes are fundamentally different from previously reported atmosphere-ocean-solid Earth couplings that produce incoherent seismic noise.” He’s talking about the relationship between wind, waves and the seafloor. Waves on the ocean surface are largely wind-driven, generated by the friction at the interface between air and water. Such waves are ubiquitous, constantly transferring energy to the solid Earth, causing oscillations that are recorded by seismometers everywhere, all the time.

The “incoherent” seismic activity caused by these persistent oscillations is considered background seismic noise, which can be used to study a variety of phenomena, ranging from the deep structure of Earth to tropical cyclones. Called microseisms (3 to 20 second periods) and the Earth hum (50 to ~300 second periods), these seismic noises are broadly explained by two mechanisms. The first, or primary, mechanism relates to interactions between ocean waves and seafloor topography. The secondary mechanism corresponds to ocean waves interacting with one another as they travel in opposite directions, as might be expected in the wake of a storm, where newly-generated waves overrun existing ones trailing behind the storm.

However, the 20 to 50 second period band is not particularly noisy, although occasionally seismic signals are detected. Fan says, “This is the first paper that has comprehensively reported the phenomena and provided a plausible physical mechanism.” In other words, the nature of the seismic source for these occasional signals was unknown — until now.

To examine seismicity in the 20-50 second period band, Fan et al. used 10 years of seismic data primarily from the USArray Transportable Array. They found coherent Rayleigh waves (a kind of surface wave), coming from regions not associated with earthquake activity, like the east coast of the US (Figure 1). The key question became - what is the cause of these Rayleigh waves?

Fan et al. correlated the seismic sources to stormy days, and ensured there were no nearby earthquakes to guarantee they were looking at something unusual. They discovered that each “stormquake” began in a single location, typically near the margin of large continental shelves that have a slightly raised edge, called an ocean bank. When a storm interacted with these ocean banks, stormquakes were generated and detected by the seismometers of the densely spaced USArray. Equivalent earthquake magnitudes were greater than 3.5, indicating that stormquakes are a significant phenomenon that should be relatively straightforward to detect.

Stormquakes can help scientists study a variety of Earth’s features because “they can be located as point sources…and will allow future novel investigations of Earth structure” says Fan. They are particularly helpful because they are often located where earthquakes are not, providing scientists with a previously unknown way to peer into the deep earth.

Stormquakes may explain mysterious seismic noises that have been detected not only in North America, but also in Europe and Africa. These seismic events have been sometimes correlated with very large sea swells. Fan et al. expect intense stormquake activity in regions where large continental shelves, ocean banks and strong storms all converge - offshore Western Europe and northern Australia are prime possibilities.

Figure 1. Stormquakes (red circles), are located in regions circled in yellow off the coastlines of North America. Seismic stations (purple triangles), are mostly USArray seismic stations. The orange contour shows a region of offshore Mexico that has an active hurricane season, but lacks stormquakes largely because of no large continental shelf. The insert shows earthquakes (blue dots) with magnitudes greater than 3 and shallower than 40 km from 2006 to 2015.