Seismologists peek at mantle beneath Madagascar

The island of Madagascar peers above the waters of the Indian Ocean, providing a home for the endemic lemurs, an array of orchids and numerous other embodiments of biodiversity. However, this curious isle—not far from mainland Africa, yet far enough to house numerous unique species—carries with it a tectonic tale from many millions of years past.

Madagascar has remained tectonically quiescent for the last 85 million years. However, between 28 and 1 million years ago, volcanic eruptions periodically disturbed the otherwise ancient rocks, and the origin of this activity is still debated. To better understand this bit of Earth’s continental crust, researchers led by seismologist Fenitra Andriampenomanana who was born and educated in Madagascar, and is now a postdoctoral fellow at the University of the Witwatersrand, South Africa, used seismic tomography to glimpse seismic properties of Madagascar's subsurface. With such images, which are to geophysicists what CT-scans are to surgeons, Andriampenomanana and his colleagues specifically examined whether certain seismic waves moved faster in one lateral direction than the other in the upper mantle beneath Madagascar. The patterns they found helped resolve the strangely hot mantle regions below the recent volcanism, and refine the history of the various geologic provinces that record an ancient, complex tectonic history. 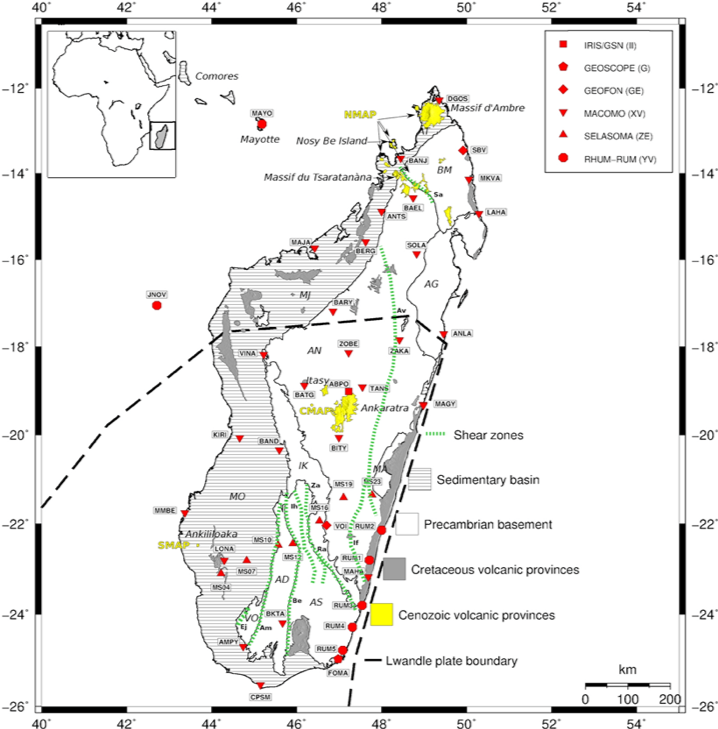 A storied tectonic past

Much of Madagascar’s land formed during the Precambrian—the time before multicellular life began its (arguable) dominion. During the Neoproterozoic (1,000 to 541 million years ago), several continents collided during the Pan-African orogenic event, building mountains that rivaled the ruggedness and exceeded the extent of today’s Himalayan Range. One of the ranges constructed during this time involved modern Antarctica and India on one side, and much of modern Africa on the other. This is when much of the eastern two thirds of Madagascar formed, tucked between Africa and what is now India.

For many millions of years, the supercontinent of Gondwana—which included Africa, Australia, Antarctica, India, South America, Seychelles and Madagascar—remained a mighty, interlocked continent. About 230 million years ago Gondwana collided with all the remaining landmasses to form Pangea. Then, nearly 200 million years ago, Gondwana began to break apart. As the continent tore over millions of years, the still linked landmasses of India, Australia, Seychelles and Madagascar began to break away from Africa. Eventually, these lands separated, with India journeying northward to plow into the southern part of Asia and Australia. Madagascar and Seychelles, however, remained near Africa. Today, Madagascar moves as Africa moves — for the most part, anyway.

Madagascar’s lithosphere—the crust and upper part of the mantle that, together, behave like a rigid plate atop the less viscous asthenosphere—broadly consists of two sections. The eastern two thirds of the island host Precambrian basement ranging from Paleoarchean to Neoproterozoic provinces cut by several north to northwest trending shear zones. The western third of the island, nearest to mainland Africa, consists of more recent repositories for sediment that mostly formed as Gondwana rifted and thinned this part of the crust, creating low-lying basins. These basins, which receive sediment even today, sit atop the stretched Precambrian basement.

Three volcanic provinces younger than 28 million years old dot the surface. In the upper mantle beneath these surface features, low seismic velocity zones exist that suggest a deep source for these alkali basalts (not the basalt associated with newly formed oceanic crust). Possible explanations include volcanism associated with fracture zones formed during Godwana’s rifting, volcanic offshoots of the nearby Comores hotspot, or East African Rift-related outpourings of lava.

Speed and direction (or, velocity and anisotropy)

By using Pn waves, which are created when P-waves refract on the Moho in the upper mantle, Andriampenomanana and his colleagues explored lateral changes in velocity specific to the upper mantle. These regional waves can not only find thermal anomalies, but also determine how deformation looks in the lithosphere mantle, helping to discern its fabric.

Using data from the IRIS DMC, the MACOMO (MAdagascar-COmores-MOzambique) project, which included instrumentation and field support from PASSCAL, and other sources, they found that low Pn velocity zones sit beneath the alkaline volcanoes, indicating that the upper mantle is hotter by about 100 to 300 K (equivalent to 100 to 300°C hotter). Their model also supports other work showing that upwelling below the centrally located volcanic region has eroded the underside of the upper mantle lithosphere, bringing the hot asthenosphere to shallower levels. Interestingly, zones with low Pn velocity also correlate with lower-crustal earthquakes, suggesting that these earthquakes might be related to magmatic activity.

The Pn anisotropy pattern changes from one end of Madagascar to the other, sometimes gently shifting course, sometimes jolting to new directions. In the south, consistent anisotropy patterns at different levels of the upper mantle suggest potentially deep-seated remnants of an ancient orogeny—but only in some places. Elsewhere, anisotropy variations at different levels of the mantle suggest that something erased the upper mantle’s record of Pan African mountain ranges, possibly related to the recent volcanism. These variations also oppose the idea that Madagascar hosts a developing plate boundary, as has been suggested by others.