The May 2018 eruption of Kīlauea dominated the 2018 summer news cycle and caught the attention of people worldwide.  In the weeks before the eruption began, numerous earthquakes were recorded at the summit. Seismic activity migrated within the East Rift Zone (ERZ) toward the eruption site within Leilani Estates, where fissure eruptions began to occur on May 3rd, 2018.  To see this progression, visit the IRIS earthquake browser.

Although the action focused on the ERZ, there is another, less active zone called the Southwest Rift Zone (SWRZ).  It consists of two strands – the volcanic SWRZ, which is fed by a shallow magma reservoir, and the seismic SWRZ, which may be supplied by the primary magma reservoir beneath the southern caldera of Kilauea. Judson et al. (2018) looked at seismic activity within the SWRZ during 2012-2014 to understand the connection between the caldera and the SWRZ, and to provide a better framework for interpreting seismicity around the volcano. 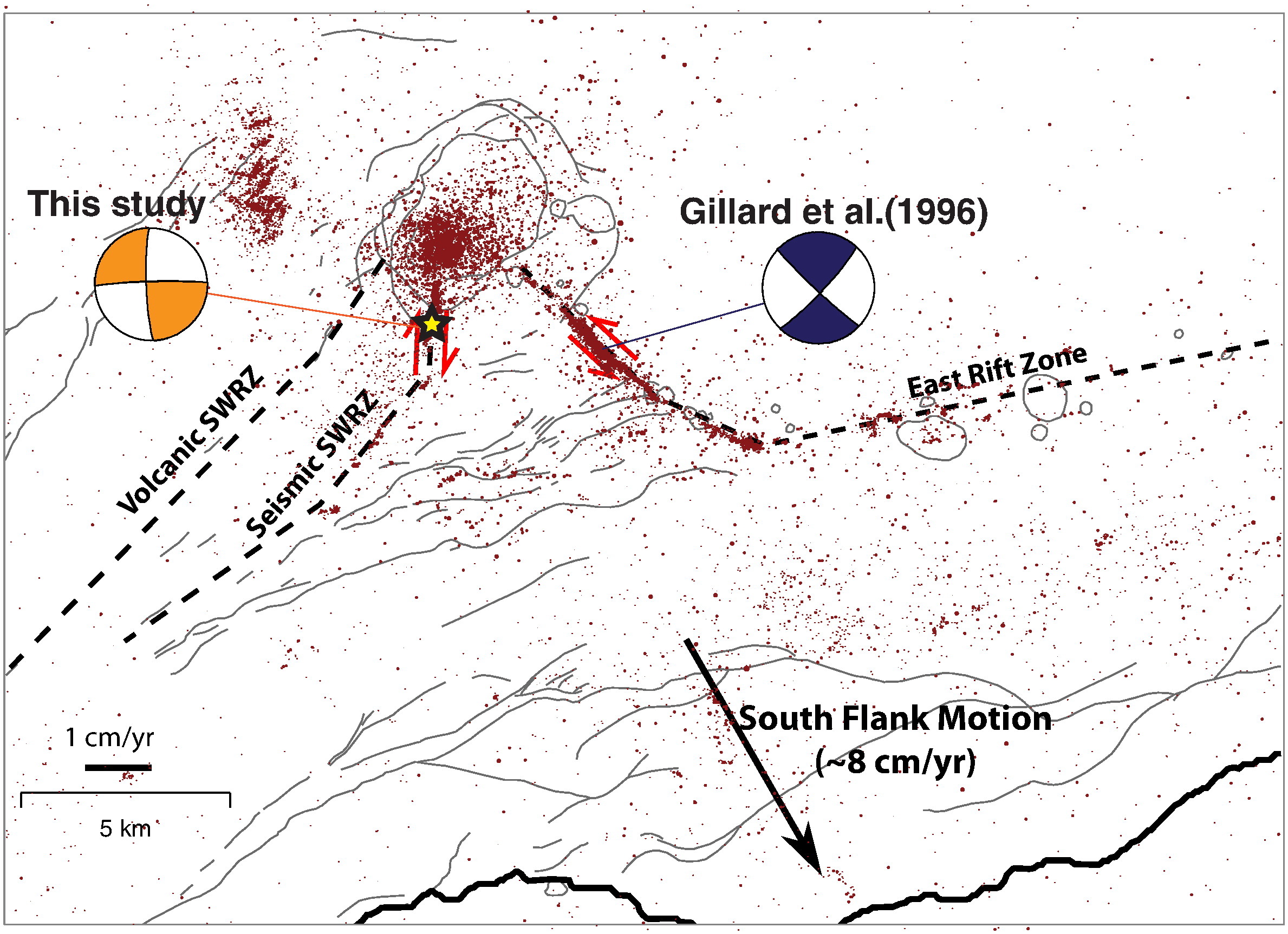 Their work relied on earthquakes recorded by 79 different seismic instruments distributed across the Hawaiian Islands (operated by the Hawaiian Volcano Observatory, the Pacific Tsunami Warning Center, and the Global Seismographic Network). Of their initial dataset of 1659 seismic events on the SWRZ, they recalculated the location of the larger earthquakes, which all appear to be located within a small volume south of Kīlauea crater. They suggest that this focused seismicity is generated at a ‘pinch point’ – a blockage that interferes with melt flow. They believe that this blockage is caused by faults that intersect to form a barrier to melt from the south caldera reservoir. Magmatic pressure built up, which allowed melt to break into the next section of the rift zone.

Another interesting finding is that the majority of the seismic SWRZ earthquakes have a right-lateral strike-slip sense of motion, whereas ERZ earthquakes are mostly left-lateral. This complimentary motion between the two rift zones may be the result of movement of the south flank of Kīlauea relative to the stable northern part of the island. A good understanding of these rift zones and how their magma sources connect underground is important for understanding patterns of deformation and seismic activity, which help researchers estimate volcanic hazards.

Figure: Map showing the East Rift Zone (ERZ) and the Southwestern Rift Zone (SWRZ), which includes both the volcanic and seismic SWRZ.  The large black arrow shows the southeast motion of Kīlauea's south flank. Strike-slip motion along the upper ERZ and the seismic SWRZ is shown with red arrows. Red dots are earthquakes between 1992 and 2009. The yellow star is the location of the seismicity relocated in this study,at the southern end of the caldera. Thin black lines mark faults on the surface, and the heavy line is the coast.