In 1928, Japanese seismologist Kiyoo Wadati published a series of papers in which he demonstrated that in Japan, some earthquakes occurred deep below Earth’s crust, tracing an incline under the island chain. The significance of this plane of earthquakes extending to such great depths would not be known for another 40 years, when scientists formulated the theory of plate tectonics.

Today, we know that the earthquakes Wadati successfully located demarcate the locations of tectonic plates that are diving into subduction zones, into Earth’s mantle. Geologists call these planes of earthquakes Wadati-Benioff zones, so named after Wadati’s contributions, as well as observations made by Hugo Benioff of earthquakes occurring on planes dipping away from other Pacific trenches, like the Aleutian trench in Alaska.

Alaska has very high rates of seismcity, accompanied by some of the world’s most impressive volcanoes. Both phenomena result from the Pacific plate plunging below Alaska, along the Aleutian trench. Although the Wadati-Benioff zone in south-central Alaska clearly appears when seismologists plot past quakes, its continuation to the east—closer to Canada—is less certain. In this region, the Wrangell volcanic field contains some of the largest continental volcanoes, which presents a perplexing problem: does the magma feeding these volcanoes result from subduction, or are other processes afoot that could explain the maybe-missing Wadati-Benioff zone?

A pair of recently published companion papers in Journal of Geophysical Research: Solid Earth explores this and other questions using densely spaced seismic stations. In these papers, the authors found evidence for different Wadati-Benioff zones that display complex geometries, while also imaging the subducting slab in detail beneath Southcentral Alaska.

Because seismic instrumentation throughout Alaska has—in the past—been sparse, seismologists installed a temporary array of closely-spaced sensors to try to better capture the geometry of the Wadati-Benioff zone beneath the Wrangell volcanic field. Data from these 34 IRIS/PASSCAL broadband seismometers of the Wrangell Volcanic and Lithospheric Fate (WVLF) deployment, along with stations from the Transportable Array in Alaska and permanent stations of the Alaska Earthquake Center, allowed a group of scientists led by doctoral student Kiara Daly, of Cornell University to detect earthquakes in a zone known for low rates of seismicity. 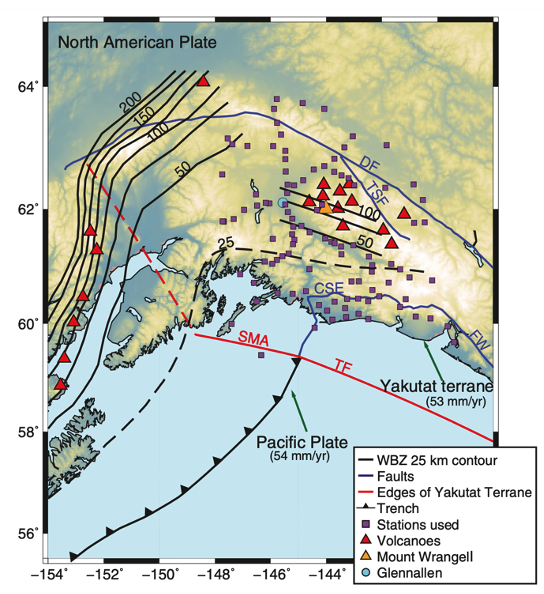 Daly and her coauthors increased the number of detected earthquakes and better pinpointed their locations, thanks to the closely-spaced instrumentation. With these data that tripled the number of earthquakes detected at depths greater than 40 kilometers, they tracked the subducting slab directly below the Wrangell volcanic field to a depth of about 100 kilometers, suggesting a link between subduction and the prolific volcanoes in this part of Alaska that was previously hidden because of insufficient instrumentation.

In the second paper, led by Michael Everett Mann, formerly a doctoral student at Cornell University and now a postdoc at Brown University, the team of scientists used the same data plus additional seismic datasets to image the subducting Yakutat terrane, which is an oceanic plateau—a large, relatively flat, high-standing feature on the seafloor produced by an outpouring of basalt. This chunk of ocean floor and its underlying rocks collided with the North American tectonic plate millions of years ago, and continues to jam the subduction zone today because of its immense thickness. By imaging this feature, Mann and colleagues found that the Yakutat terrane subduction zone runs nearly continuously for more than 450 kilometers, with a clearly delineated fault zone down to depths between 40 to 45 kilometers. Deeper into the mantle, complexities arise.

In particular, Daly and colleagues found a narrow zone lacking seismicity that sits between the Wrangell volcanic field’s faint Wadati-Benioff zone, and the Denali volcanic gap’s very well-defined subducting slab. The Denali volcanic gap, residing between the Wrangell volcanic field to the east and the volcanoes that dot the Aleutian arc to the west, exhibits a dearth of volcanoes yet showcases a distinctly clear Wadati-Benioff zone. The earthquake-free zone noted in both studies at depths below about 40 to 45 kilometers suggests a tear deep in the subducting Yakutat terrane. 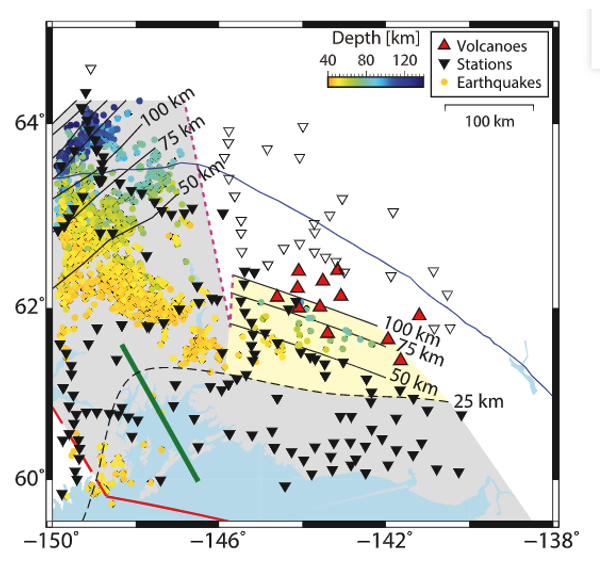 “Magma upwelling caused by the slab tear, together with the highly oblique subduction orientation relative to plate motion, likely results in a warmer subducting slab beneath the Wrangell volcanic field, which might explain the weak seismicity coupled with extensive eruptions,” explains Daly. “On the other hand, located further from the tear and where subduction is oriented parallel to plate motion, the Denali volcanic gap’s colder slab, could explain the lack of active volcanism but high seismicity,"

Other explanations for the curious juxtaposition are possible, according to Geoff Abers, coauthor of both studies and doctoral advisor to both Daly and Mann, but, "the tear is what we observe, for the first time.”

In Mann’s paper, along the entire 450 kilometer-long length of the Yakutat terrane, he and his coauthors found the crustal portion of the slab to range from 12 to 32 kilometers thick. Specifically, they found that the subducting crust thickens from west to east, says Mann, and is especially thick at its east end. Beneath the Wrangell volcanic field, the crust is approximately 18 kilometers thick; typical oceanic crustal thickness is on the order of five to seven kilometers.

They also found a low velocity layer along the length of the slab between one and seven kilometers thick. This zone delineates the plate interface, says Abers, and could be either subducting sediments or other materials in a shear zone subduction channel.

Finally, Daly’s paper notes a cluster of 830 earthquakes near the town of Glennallen, Alaska, too shallow to relate to the subducting slab. They hypothesize that these quakes indicate interesting magmatic processes between 10 and 30 kilometers depth, warranting additional investigation. Nevertheless, the data collected by closely-spaced seismic arrays in this part of Alaska have addressed many problems, while also facilitating discovery of interesting and potentially important subsurface features.