Cover Image: Screenshot from the USGS interactive map for the Mw 7.6 Chiloé earthquake. The star indicates the earthquake epicenter and the color lines, called isoseismal lines, show the intensity of earthquake shaking experienced in different locations.

Periods of relative seismic “quiet” after megathrust earthquake ruptures are common, partially because it takes time for stresses to accumulate along the part of the fault that broke during the previous earthquake. The rate at which this happens varies along the plate boundary in both space and time and is often accompanied by a long period of post-seismic mantle relaxation. By using GPS to examine regional changes in the earth’s surface with time, and seismology to understand the rupture process and stress changes associated with nearby earthquakes, researchers are seeking to understand the “reawakening” of the megathrust boundary along the west coast of Chile. 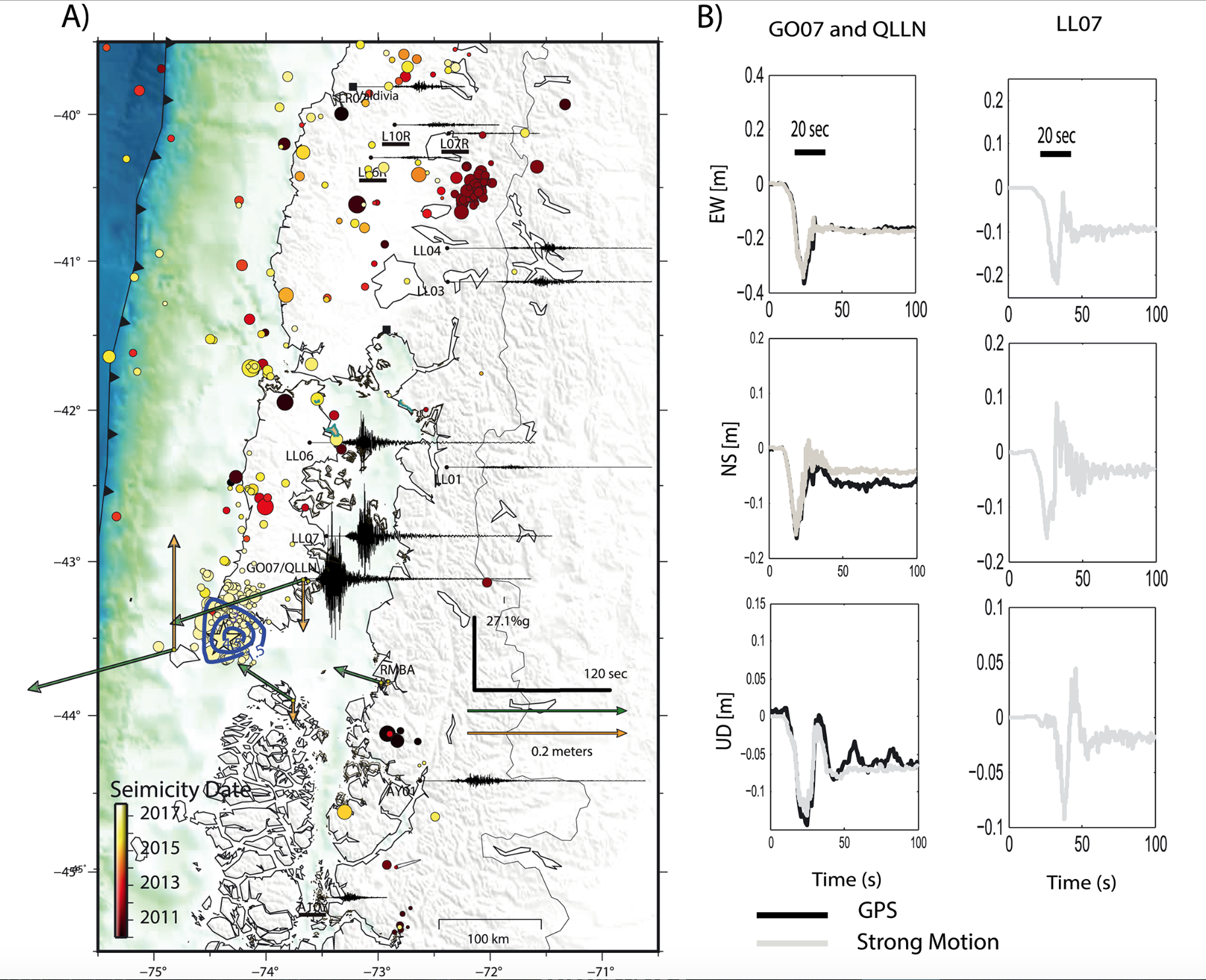 The Mw 7.6 Chiloé earthquake that occurred on December 25, 2016, in south-central Chile was the first large earthquake to rupture, or break, a part of the megathrust boundary that failed during the Mw 9.5 earthquake of 1960. Regionally, the Chiloé earthquake was preceded by the Mw 8.8 Maule 2010 megathrust earthquake. That event significantly increased continental GPS velocities, most likely because it changed mantle flow and ended the viscoelastic mantle relaxation from the Mw 9.5 event. That earthquake also increased the degree of plate locking within the 1960 earthquake rupture zone. By using teleseismic and regional seismological data from the IRIS Data Management Center (including stations established by the IRIS GRO-Chile project, a 2010-13 NSF MRI initiative), researchers were able to determine that the Mw 7.6 Chiloé earthquake ruptured one of the zones where increased locking had occurred. Also, detailed analysis of the seismic and GPS data found that the hypocenter for the Chiloé earthquake was located in the deeper portion of the seismogenic zone and that the earthquake rupture moved upwards and towards the northwest. This study shows that earthquakes from distinct seismic zones can have a direct effect on both fault locking and mantle processes such that they make earthquakes on adjacent faults or fault segments more likely. Finally, the Mw 7.6 Chiloé earthquake, which was the first major earthquake to rupture the plate interface of the 1960 earthquake, may signify the beginning of increased seismic activity in south-central Chile.