For residents of much of the northwestern coast of North America, the possibility of the Big One looms. The Big One refers to a catastrophic megathrust earthquake likely to occur in the future. One day, the Juan de Fuca oceanic tectonic plate will suddenly lurch as it descends beneath North America, causing a massive earthquake that tears the seafloor.

When such large movements occur beneath the sea, the water’s displacement can cause devastating tsunamis. For the northwestern coastal U.S. and southwestern Canada, such tsunami-producing earthquakes have certainly happened in the past (see video below). However, for more than three hundred years, Cascadia has been quiet; no modern seismic instruments have recorded megathrust earthquakes.

Today, different types of slow earthquakes tear at the subduction zone every 11 to 15 months without producing the jolt of a full-fledged, ground-shaking quake. Various versions of slow earthquakes in Cascadia occur about 10 to 15 kilometers below where regular earthquakes strike. At such depths, about 30 to 50 kilometers down, the rocks are too hot and deep for sudden shocks that people can feel. Yet, over a period of weeks to months, these slow movements can release the equivalent energy of a regular magnitude-6.7 earthquake.

What happens in the gap between earthquakes and slow quakes, between about 15 to 30 kilometers depth, has remained enigmatic. In new research published in AGU Advances, seismologists led by Wenyuan Fan of Scripps Institution of Oceanography detected and located one type of poorly understood slow earthquake—called very low frequency earthquakes, or VLFEs—in or near the gap.

The frequency of any kind of wave—seismic, water, or otherwise—tells you how many waves pass a fixed location during a specific amount of time. The higher the frequency, the closer the peaks of the waves, with typical earthquakes containing abundant high frequency signals that are greater than 1 Hertz, which equates to one cycle per second.

As the name suggests, very low frequency earthquake signals are swamped by waves with long separations between each peak—periods of about 20 to 50 seconds (0.05 to 0.02 Hertz). When such signals have been identified in Cascadia in the past, they’ve occurred in the zone of other slow earthquakes, at depths below 30 kilometers.

Fan and his colleagues scoured USArray data collected from August to October of 2009, applying a method used to identify stormquakes and submarine landslides triggered by earthquakes. They used the “Automated Event Location Using a Mesh of Arrays” or AELUMA method, which focuses on the up-down component of Rayleigh waves that provides a more robust signal than side-to-side motion. They identified two VLFEs in the gap zone, with a third VLFE adjacent to the otherwise seismically desolate section of subduction.

A cascade of events

On August 3, 2009, about 2,000 kilometers south of Cascadia, a strike-slip fault ruptured in the north-central region of the Gulf of California in Mexico. The magnitude-6.9 Canal de Ballenas earthquake sent seismic waves around the world. After the initial body waves (the P- and S-waves), surface waves followed. These waves were imperceptible to residents of Oregon and Washington, but sensitive seismic and geodetic stations detected these subtle ground motions.

Fan and his colleagues found that within 15 minutes of the earthquake, three seismic sources—E1, E2 and E3—began within five minutes of one another, coinciding with the arrival of surface waves from the moderately large Mexican temblor (Figure 1). The first two events likely struck somewhere below northern Oregon, though their locations are poorly constrained. The third VLFE, E3, occurred to the north, beneath Olympic National Park in Washington, says Fan, and is better constrained because it was the least obscured by waves from the Canal de Ballenas earthquake. Its location was confirmed via strainmeter data. 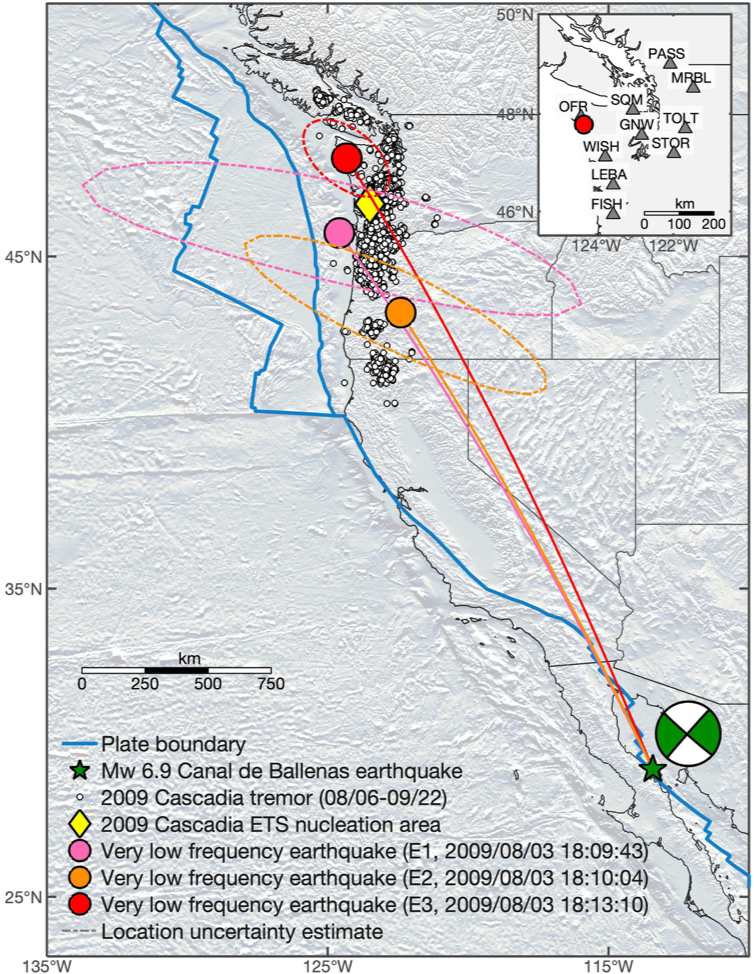 Figure 1. The 2009 magnitude-6.9 Canal de Ballenas earthquake, the likely dynamically triggered VLFEs (E1, E2 and E3), and the 2009 Cascadia ETS may be linked. The small white circles showing the tremor catalog comes form the Pacific Northwestn Seismic Network (see inset for stations). The green beachball diagram near the green star shows the strike-slip motion of the Canal de Bellanas earthquake. The dashed ellipses around each VLFE indicates the uncertainty in location. Note that the location of E3 (red) is much better constrained than E1 and E2.

Because the VLFEs began shortly after the Canal de Ballenas earthquake’s surface waves rolled by, Fan and his colleagues hypothesized that the earthquake triggered the VLFEs. Three days later, the 2009 Cascadia Episodic Tremor and Slip, or ETS, event kicked off. Another type of slow event that combines different types of slow earthquakes, the 2009 Cascadia ETS eventually producing many hundred of tiny tremors and silent slips below 30 kilometers depth that were too small (and deep) for anyone to feel.

Thanks to E3’s robust signal, Fan and his team determined the depth range of the event to be between 15 to 25 kilometers, and estimated that it was equivalent to a magnitude-5.7 earthquake—much larger than any past VLFE in any subduction zone.

“There have been cases where slow earthquakes, mostly slow slip events, may have initiated large megathrust earthquakes at other subduction zones,” says Fan. If Cascadia is similar to those regions, he explains, VLFEs could potentially increase the probability of large earthquakes, assuming the fault is near its breaking point, and therefore weak. “However, this is not very well understood and a more systematic examination with rigorous uncertainty quantification is very much needed to make a meaningful forecast,” he says. The seismic stations that listen for signs of movement, satellites that track the subtlest ground motions, and other instrumentation that measures the strain produced by both sudden and slow earthquakes, can continue to provide a wealth of data for seismologists to sift.