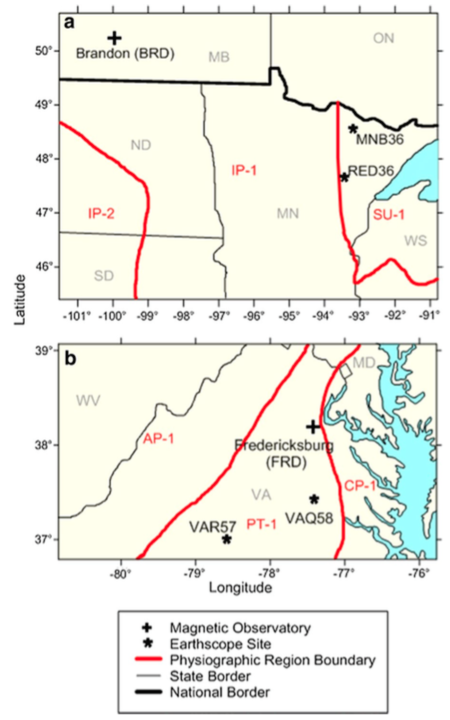 Earth’s magnetosphere, the space around Earth that is affected by its internal magnetic field, is susceptible to disturbances called “geomagnetic storms.”  These storms occur when the sun releases a large amount of charged particles into the solar system in often-violent events called “coronal mass ejections,” causing the Earth’s geomagnetic field to change rapidly. During these storms, the Earth’s changing geomagnetic field interacts with the Earth’s subsurface geology to produce “geoelectric” currents that can, among other problems, wreck havoc on the world’s electrical grids, communications systems, and navigational infrastructure. Of particular concern is damage to electrical grids because previous geomagnetic storms have caused blackouts, power failures, and damage to transformers and other critical components.

To prepare for future geomagnetic storms, scientists need to know more about the geoelectric field and how it varies during a storm event. USArray, which is part of the EarthScope program, deployed both seismic and magnetotelluric equipment across the United States. This resulted in a wealth of data, some of which has been utilized by Cuttler et al. (2018) to address this problem. They found that geoelectric fields in the same region could differ by up to two orders of magnitude during the same geomagnetic storm. This means that simple models of subsurface geology often used in current research are inadequate for predicting the geoelectric field, as these models do not predict such a large variation. Instead, a more complex 3D model of the subsurface geology is needed to reliably estimate how geoelectric fields evolve during a geomagnetic storm. Such models are more computationally intensive, but should allow scientists to more accurately assess hazards associated with these storms.