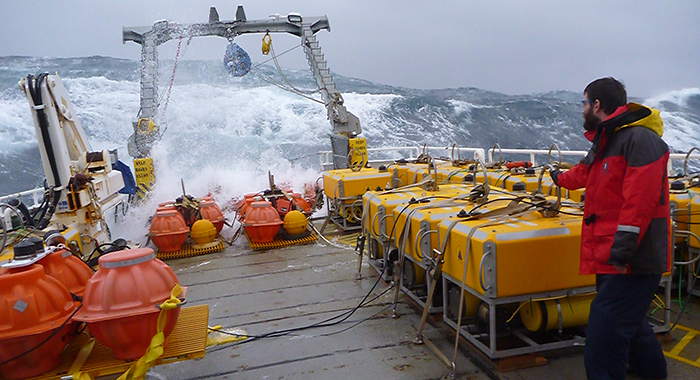 Seismologists have been recording earthquakes for more than a hundred years. Most of the instruments we use to measure ground motion are land-based seismometers. The ocean covers over 70% of Earth’s surface, and most earthquakes occur below the seafloor, so the ability to record earthquakes closer to their sources is important to Earth scientists. Over the past 20 years, the National Science Foundation has supported scientists and engineers at academic institutions to develop a new type of seismic sensor called an ocean bottom seismometer (OBS). These instruments are able to withstand the ocean’s hostile environment, including salty (corrosive) waters, low temperatures, and high pressures. IRIS manages the Ocean Bottom Seismograph Instrument Pool (OBSIP), which makes available OBSs to the geoscience research community. OBSIP works closely with the IRIS Data Management Center (DMC) to ensure that all OBS data users receive are accurate and complete.

The Cascadia Initiative
Currently, OBSIP is in the midst of a large community-designed onshore/offshore seismic and geodetic experiment called the Cascadia Initiative (Figure 2). The goal of this project is to better understand megaearthquakes, volcanic arc structure, and the formation, deformation, and hydration of the Cascadia subduction system located off the northwest coast of the United States and Canada. This geologically active region has produced large earthquakes, tsunamis, and volcanism in the past.

Starting in 2011, instruments have been deployed over three field seasons both onshore and offshore. The fourth and final offshore instrument deployment is planned for the summer of 2014. Sixty new OBS instruments were built specifically for the Cascadia Initiative, and contain both seismometers and pressure gauges.

The Cascadia Initiative and the Fishing Community
The Cascadia margin is an active fishery. Scientists worked closely with local fisherman to ensure that both the fishing industry and the scientific experiment could coexist. As one step in this cooperation, the Cascadia Initiative deployed instruments at sites that avoided the most heavily fished areas.

A second step to ensure success of the experiment was for IICs to develop trawl-resistant enclosures for OBSs (Figures 3 and 4). Fisherman along the Cascadia margin use a practice called bottom trawling, where fishing vessels drag nets along the seafloor. This activity is a potential problem for traditionally built seismometers whose irregular shape can easily be snagged by trawling nets. LDEO developed and built 20 instruments for deployment in shallow water that are mounted in trawl-resistant frames. SIO also built 15 trawl-resistant enclosures for their OBSs. The-trawl resistant frames have sloped sides to allow the nets to slide up and over the instrument. The additional weight of the trawl-resistant mount also makes the instrument settle deeper into the mud on the seafloor, and the mud creates a smoother gradient for the nets to move over.

The DMC and OBSIP are Working to Improve Cascadia Data
The first year of Cascadia data was recovered in summer 2012 and uploaded to the IRIS Data Management Center. A major difference between offshore and onshore seismometers is that OBSs are deployed remotely so that instrument status, location, and orientation are not known initially. Scientists use sonar to locate the instrument after deployment and to send it commands to release from the seafloor. Only after the instrument has been recovered do researchers learn whether it recorded data.

After the instrument is recovered, scientists also have to determine how it was oriented on the seafloor. For an onshore (land) seismometer, scientists can manually orient its components so that one of them is aligned with north, one with east, and one with vertical motion. For an ocean bottom instrument, we must calculate where the sensor components were pointed by using what we know about the instrument set up and the earthquakes that the instrument recorded. In order to make the first year of the Cascadia data set most useful to a wide array of investigators (including those who have traditionally worked with land stations), OBSIP calculated the horizontal orientations of the Cascadia seismometers.

Full details on determining the horizontal orientation of the Cascadia ocean bottom seismometers can be found in the published report: http://www.obsip.org/documents/Cascadia_Data_Products_Report_Year_1.pdf

OBSIP has also been reviewing how ocean bottom seismometers record noise on the seafloor. By comparing the amount of noise an instrument records and the frequencies at which the noise occurs, OBSIP can investigate which characteristics, such as instrument depth or type, contribute to the noise. Shallow water OBS deployments are “noisier” than deepwater deployments because of swifter currents and more wave action. When a shield covers the shallow OBS instruments, like those developed by LDEO and SIO, the stations are less noisy and thus are able to record earthquakes more easily.