How does a tectonic plate die?

Off the coast of the Pacific Northwest lies a subduction zone where the vestiges of the once vast Farallon oceanic tectonic plate slides beneath North America. The Juan de Fuca plate and its southern Gorda and northern Explorer sections (Figure 1) subduct beneath northern California, Oregon, and Washington, forming the Cascadia subduction zone and overlying Cascade volcanic arc.

Scientists carefully monitor this subduction zone for megathrust earthquakes from both the ground and the sky, periodically blanketing the region with dense arrays of seismic and geodetic instrumentation. The EarthScope Transportable Array, which included land-based seismometers, and the later Cascadia Initiative, which included both onshore and offshore instrumentation, help scientists see below the surface. 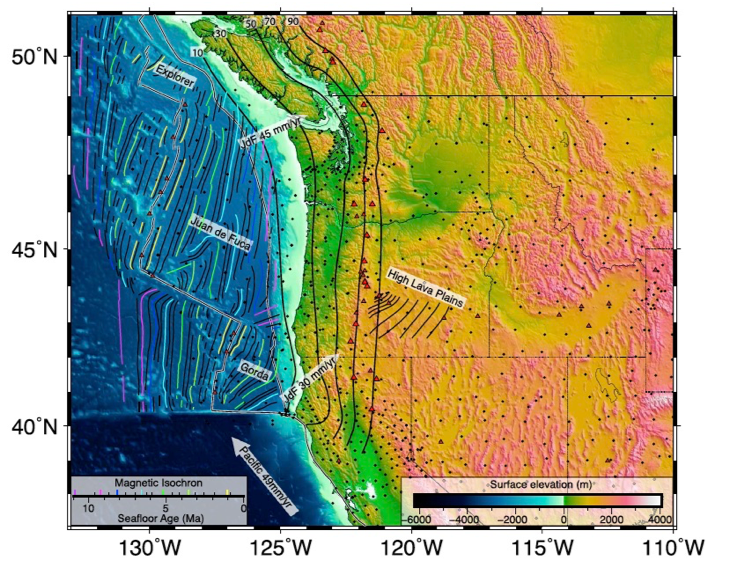 Armed with a wealth of information from these arrays, scientists William Hawley and Richard Allen explored the question of how oceanic plates die, which, in its simplest definition, is when a plate's birthplace—its mid-oceanic ridge—is consumed by its subduction zone. Hawley and Allen, however, envision a more complex model for plate death, wherein the plate begins to tear in the mantle. In the case of the Juan de Fuca plate, they hypothesize that a hole deep in the slab is propagating upward and tearing the slab apart. This process drives surface volcanism, with the tear actively pulling at the southern end of the Juan de Fuca plate that has not been subducted—the Gorda section. Further, they consider what could happen in the future as the tear tugs on the Gorda section. One idea is if the Gorda ridge stops making new oceanic plate, the Gorda “microplate” would be given new life as part of either the North American continent or the Pacific plate. Their results were published in the July 2019 issue of Geophysical Research Letters.

History of the Farallon plate

Today, the San Andreas has grown to Northern California, near Mendocino. Beyond Mendocino, the remnants of the Farallon plate—the Juan de Fuca plate and its Gorda and Explorer sections— are still forming at small mid-ocean ridge sections outboard of the Pacific Northwest, and subducting below the North American plate.

To image the parts of the Juan de Fuca slab that have already been subducted, Hawley and Allen obtained seismic data from the IRIS Data Management Center. Using these data, they constructed large-scale 3D images of the interior structure of the earth below northern California, Oregon, and Washington.

The Juan de Fuca plate spans the west coast from approximately Eureka, California, to the U.S.-Canada border. Hawley and Allen’s 3-D images show that approximately 150 kilometers below the surface, the subducted plate has a hole that extends from about three Sisters Volcano, Oregon in the south to Mt. Adams, Washington in the north. The precise depth of this gap differs between this model and similar models that were produced by other researchers, but a hole exists in every 3-D model from this region.

Hawley, who completed this project as part of his doctoral work at the University of California at Berkeley under the tutelage of Allen, says, "We saw evidence for a hole in the slab approximately 150 kilometers below the surface, and began to wonder what the effects of this would be on the plate that hasn't yet subducted.”

Which way did the slab tear?

Hawley and Allen’s preferred explanation is that as the slab tears at depth, hot mantle wells up through the hole and heats the North American plate from below. In this way, the tear has facilitated volcanic eruptions at the surface, explaining the existence of the High Lava Plains. If explanation is accurate, then the age progression of the volcanism—older to the east versus younger, and ongoing, to the west—suggests that the tear is propagating up dip, or back toward the subduction zone, ripping the slab from the bottom up. 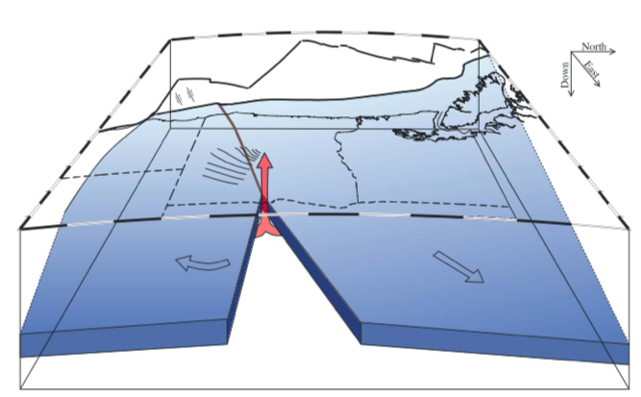 Because the Juan de Fuca plate is tearing toward the subduction zone, Hawley and Allen turned their attention to the part of the plate that has not been subducted. Hawley says, “The bit [of plate] on the surface must respond to this deeper breakup.” Hawley and Allen posit that the Gorda section of the Juan de Fuca plate would rotate clockwise in this scenario (Figure 2). This rotation could explain the intraplate seismicity and strike-slip faulting that is observed within the unsubducted Gorda section today.

A new model for plate death

“As a ridge nears a subduction zone,” Hawley says, “there’s so much more plate that has been subducted already compared with what's still on the surface.” He explains that what happens to the plate at depth will likely dictate the behavior of the small fragment that has yet to be subducted.

Hawley and Allen point out that one possibility is that the ridge ceases to be a ridge. Hawley says, “for that to happen, the forces must change significantly.” But that may be exactly what’s happening in their hypothesis. If subduction ends before the ridge arrives at the trench, the surviving plate fragment may instead attach to one of the two plates that bound it. In the case of the Juan de Fuca plate, options are either the Pacific or North American plates.

Further, there is precedent for the Pacific plate capturing older fragments of the Farallon, if one looks to the south. Seafloor magnetic data of what is ostensibly Pacific plate shows instead several older Farallon fragments—the Magdalena, Guadalupe and Monterey microplates—that were incorporated into the Pacific plate before they could be subducted below Central and North America.

The geologic record also contains numerous examples of the second option—accretion to the North American plate. In this process, the deforming slab could become a piece of continental crust, thus providing a mechanism for how continents are built, which, Hawley says, “is an enormous puzzle.” Hawley and Allen cite terranes accreted to North America millions of years ago that may still have oceanic slab fragments attached to them, as imaged by USArray.

Hawley says, “Our data only show us a snapshot of a process that changes with time. Will the Gorda plate be accreted onto the Pacific? Will it attach onto North America like any number of other oceanic terranes that make up the building blocks of large chunks of continental crust?”

By examining their seismic observations in the context of petrologic and geochronologic information, Hawley and Allen put forth an intriguing idea that oceanic tectonic plates can disintegrate from the bottom up. Perhaps they’ve caught the Gorda section of the Juan de Fuca plate dying this unconventional death, where it will instead find new life as part of another plate in the future.  Hawley says, “Through this work, we’re encouraging people to think more holistically about how a small plate might be pulled around by its own slab, whether that in itself could cause the breakup of a plate, and what might happen to the plate after breakup.”

Figure 2. Cartoon model looking toward the west showing the hole in the descending Juan de Fuca Plate. Note the outlines of Oregon and Washington. The High Lava Plains are shown as a series of lines above southern Oregon. Clockwise rotation of the Gorda section of the Juan de Fuca plate is indicated by the arrow on the left.