Throughout the 19th and 20th centuries, scientists listened for the world’s booms and shakes, searching for Earth's pulse with seismology. Today, seismologists share data collected from sensors around the world that detect even the slightest twitches of Earth's surface. Data centers that store this information include the Data Management Center of the Incorporated Research Institutions for Seismology, funded by the U.S. National Science Foundation as part of its Seismological Facility for the Advancement of Geoscience (SAGE), as well as European Union-based data centers ORFEUS, INGV, IPGP and ETH, and New Zealand’s GEONET. Seismologists readily share data globally thanks to a standardized data format, made easily accessible by anyone via the International Federation of Digital Seismograph Networks.

Permanent global seismographic networks, supplemented by both permanent and temporary regional deployments, collect data that help answer fundamental questions about Earth. The most obvious use of such data (to most of us anyway) involves pinpointing when and where earthquakes occur. But, such data can help with a variety of other problems, ranging from differentiating earthquakes from explosions to tracing typhoon tracks. Moreover, as high-quality seismic data is being collected at lower frequencies (long wavelength, long period), geophysicists can explore the deepest secrets of Earth's interior while also extracting information about glaciers, oceans, and other above-surface phenomena.

A recently published paper in Reviews of Geophysics, coauthored by 17 experts in seismology who work at institutions around the world, explores the rich history of global seismic networks and the studies facilitated by such expansive datasets. In this two-part science highlight series, we first focus on the history of global seismographic networks, as well as advances in instrumentation. In the second part, we move on to the work facilitated by these near and far observatories.

In the late 1800s, the scientific community discovered that when an earthquake occurs, the seismic waves it generates travel through Earth, to waiting sensors at distant locales. This observation sparked an interest in establishing an international network of seismograph stations, with early efforts initiated by the Milne network—named for its progenitor, John Milne. Deployed in the late 1890s and early 1900s, this network eventually included about 30 nearly identical seismographs situated near mostly mid-latitude coastal cities. Shortly after Milne produced one of the first global seismicity catalogs, the international Jesuit network of seismometers began operation, mostly located in the Americas and Britain. Unlike its predecessor, the Jesuit network’s instrumentation included a mix of seismographs.

These early stations involved analog instruments that recorded ground motion on photographic paper, and only in relatively narrow frequency bands. Nevertheless, the stations provided the data that established the basic structure of Earth’s interior, including confirmation of the core’s existence and its two-part anatomy of solid swathed in liquid.

During the 1950s, the U.S., the U.K., and the Soviet Union began negotiations of the Comprehensive Test Ban Treaty (CTBT) to restrict development of new nuclear weapons by countries with such capabilities. However, scientists at the time weren’t sure that underground testing could be distinguished from earthquakes via seismicity (in fact, earthquakes and underground nuclear explosions have only rarely been confused).

Nevertheless, President Eisenhower’s Panel on Seismic Improvement recommended that existing stations throughout the world be equipped with modern instrumentation as soon as possible, with an annual budget of $18 million—a windfall compared to the pittance designated for seismology prior to 1960 of about $0.7 million per year. This relatively sudden injection of funds resulted in the conception and deployment of the World-Wide Standardized Seismographic Network, or WWSSN, in the early 1960s (Figure 1). 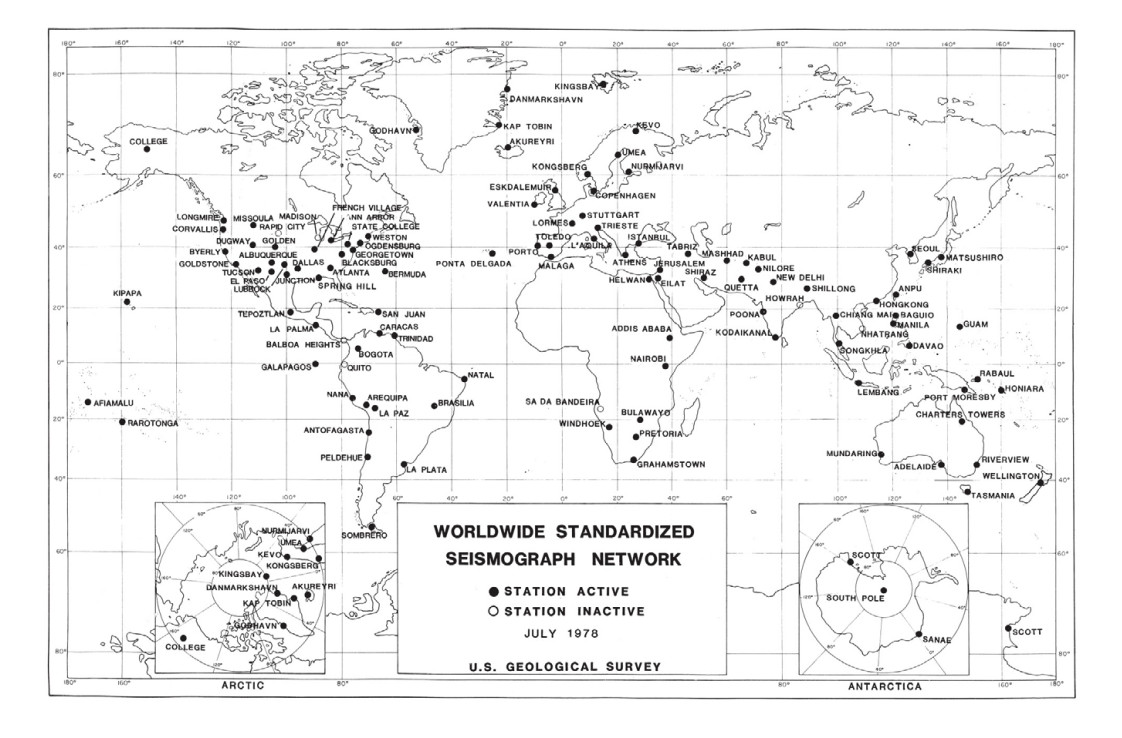 Well-calibrated seismograms recorded on photosensitive paper were easily available. The data were suitable for nuclear explosion monitoring and characterization of earthquakes near any given station. But, with the narrow frequency range, only very large or deep earthquakes produced strong-enough long period surface waves and free oscillations (also called normal modes, which ring the earth like a bell) to be recorded with sufficient signal.

In the 1970s, digital advancements allowed for some of the WWSSN stations to be incorporated into the Global Digital Seismograph Network (GDSN). Output was digitized locally at each station. However, GDSN remained unable to resolve very long period (long wavelength, low frequency) ground motions because the instrumentation could only record a narrow range of higher frequencies, explained Adam Ringler, lead author of the paper.

In 1976, the International Deployment of Accelerometers (IDA) installed a network with the goal of recording Earth's lowest frequency signals to study its interior—not possible with the WWSSN or GDSN, which were unable to record these long-period signals with sufficient resolution. These instruments, initially developed for recording accelerations, are similar to the accelerometers found in today’s smartphones that allows the screen to know which way is up.

In the 1980s, the French program, GEOSCOPE, came online with a goal of improving long-period seismology not only in the vertical (up-down) direction, but also side-to-side horizontal motions, described in the cardinal directions (east-west and north-south motions). By the end of the 1980s, GEOSCOPE spanned about 20 stations, each hosting a Streckeisen STS-1 seismometer—a novel instrument known for incorporating features of the first very broadband (VBB) seismic station that allowed recording a wider swath of the seismic spectrum than any other sensor at the time (Figure 2 - Vertical component Streckeisen STS-1 seismometer inside an evacuated bell jar. Credit: Ringer et al., 2022; Figure modified from Streckeisen GmbH). 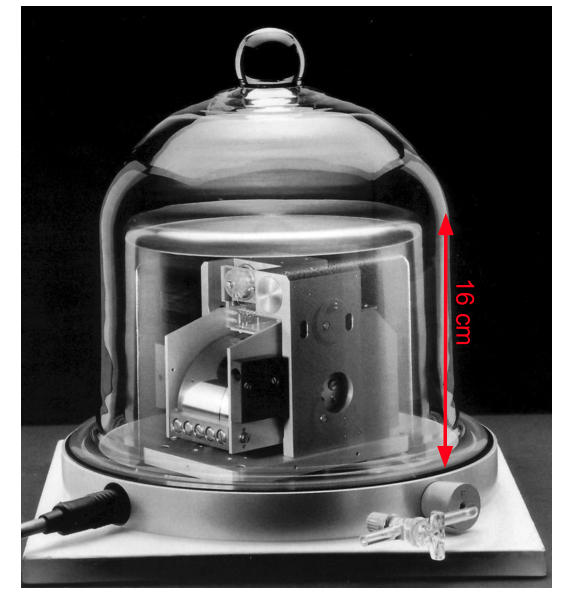 GEOSCOPE showed early success, underscoring the limitations of other global networks like the GDSN and IDA networks. In 1984, U.S. seismologists put for the original IRIS “Rainbow” proposal, which included funding for 150 globally distributed VBB seismic stations that would broadly follow the existing footprint of the GDSN and IDA networks. The proposal also included a community facility (IRIS) with a data center and system for storing and distributing data (IRIS DMC), and access to portable instrumentation (PASSCAL). After funding was granted, GSN stations began deployment in the late 1980s where they made use of Streckeisen STS-1 sensors, with stations becoming operational by the mid-1990s.

Advances in both electronics (like a way to compress and store the massive amount of data) and communication (like the internet versus snail mail) allowed seismologists to rapidly access a single data stream to record frequencies ranging from 5 Hz to one day—the scale of Earth tides (the motion of solid Earth resulting from the gravitational pull of the sun and moon). These innovations further sparked the move toward the global seismographic networks as we know them today.

By the mid-2000s, GSN stations also incorporated secondary broadband seismometers and strong motion accelerometers. In particular, the secondary sensors provide quality control and redundancy in case of failure, while also being used by the International Monitoring Agency for Comprehensive Nuclear-Test-Ban monitoring, says Ringler.

Thanks to its modular design, the GSN allows for straightforward integration of new technologies, resulting in multi-instrument geophysical observatories. For example, many stations now include infrasound sensors that listen for acoustic pulses in the atmosphere and environmental sensors that detect meteorological information like pressure and temperature. Some GSN seismometers can even be sensitive to significant geomagnetic activity at high latitudes, says Andy Frassetto, a Program Manager at IRIS.

As of 2021, several networks in addition to GSN comprise a truly global distribution of digital, low-noise stations capable of transmitting data in near-real time. GEOSCOPE includes 33 stations, GEOFON (Germany) operates 84 stations, and GSN exceeds 150 stations (Figure 3). Together, these approximately 270 stations rapidly transmit data that results in quick characterization of earthquakes, providing earthquake and tsunami hazard information. The range in detected frequencies have led to a better understanding of how faults break, as well as images of Earth’s interior at increasingly high resolution.

Even with advances in instrumentation, design, and periodic investments in station build-out and site infrastructure, maintaining a global distribution of very broadband observations is a challenge, says Frassetto, who helps to manage the operations and strategic planning of the GSN. “Even now, there are only around 173 active VBB seismic stations operating worldwide, roughly two-thirds of which are GSN,” based on a recent inventory of station lists conducted by IRIS.

“However, thousands more broadband seismometers are operated around the world on a permanent basis, many by networks with a strong regional presence and a legacy of providing high quality and very broadband data," says Frassetto. For example, MEDNET (Italy) and Pacific21 (Japan), fall into this category, as do large and widely distributed national networks covering significant regions such as Australia, Canada, and Chile. In the open-data spirit of seismology, data from these networks are now widely exchanged and integrated with many thousands of additional seismic datasets via IRIS DMC and other data management centers, especially since the adoption by the FDSN of the SEED format that standardized seismic data. At IRIS in particular, GSN data remains the most downloaded per byte. 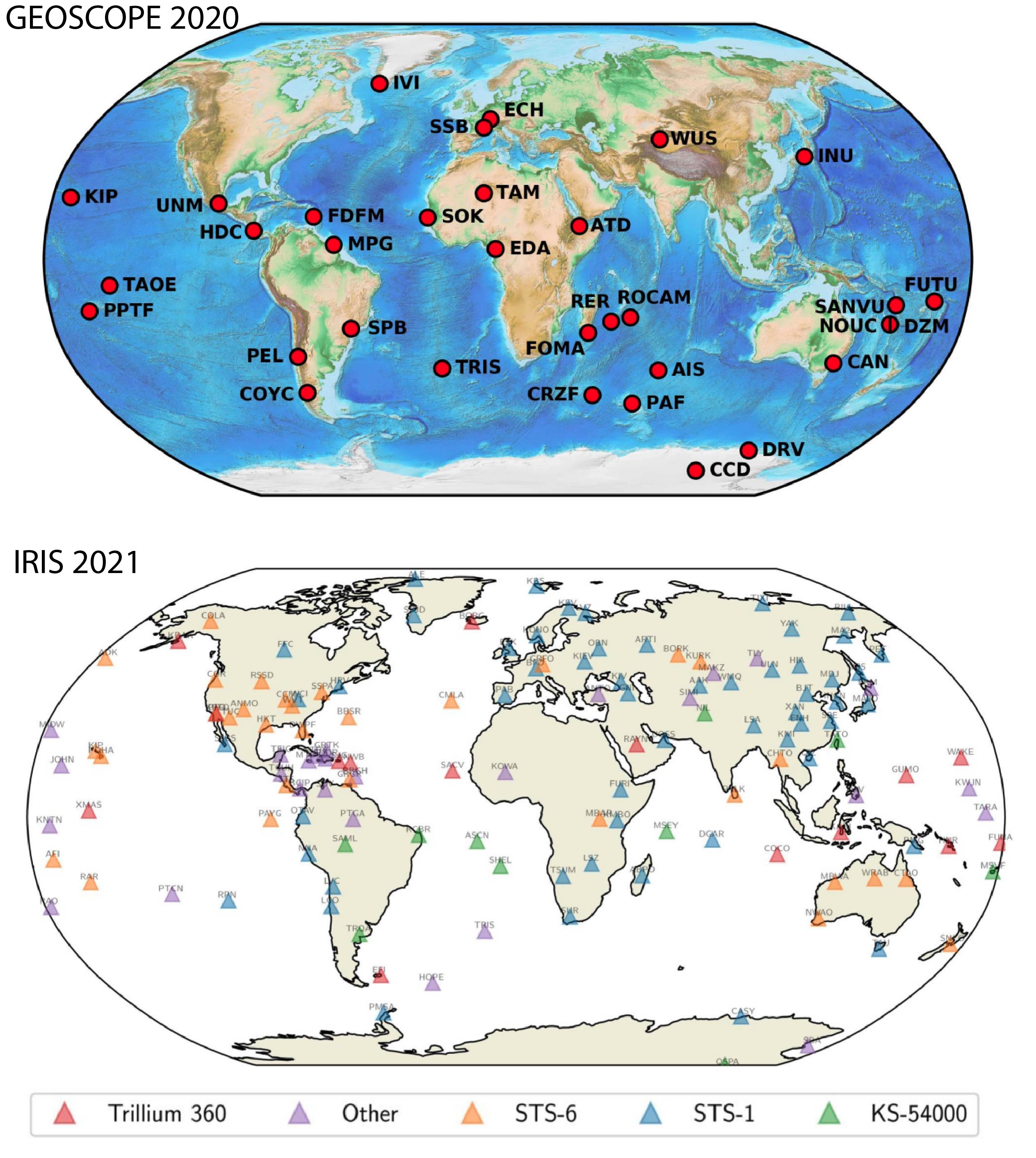 To continue collecting this trove of information, stations require maintenance with an eye toward improving data quality. Non-seismic measurements can help assess subtle influences on seismic data, such as pressure, wind and magnetic field strength.

At the moment, nearly all seismic observatories are restricted to continents and islands. Hydrophone deployments, like the MERMAID project, could help, as could the development of long-term ocean-bottom seismometers, which would require both technological innovations and resources. “Improving station coverage to the oceans could help to improved our understanding of the interior of the Earth,” says Ringler, especially by providing more data for seismic tomography—like a CT-scan of Earth's interior.

Improvements in long-period (long wavelength, low frequency) collection capabilities of global seismographic network stations is critical for quickly locating earthquakes and characterizing their focal mechanisms, used for issuing tsunami warnings after large earthquakes, says Ringler. Such information would also further facilitate studies of interesting phenomena, for instance curiously large low-shear-velocity provinces that pool at the boundary between the core and mantle. In the future, Ringler expects to see machine learning come to the fore; providing the best possible data for future generations is one consideration in forward-thinking plans."For example, people are just now using machine learning on things like WWSSN data, and so you never now what applications will come,” he says.

“Global seismographic networks have been fantastically successful at imaging the interior of the Earth, quantifying where tectonic plate boundaries are, and reducing geological hazards," says Ringler. Just as advancements in telescopes produce higher resolution images of distant galaxies, continued improvements of the infrastructure and instrumentation of global seismic networks will precipitate new discoveries and an improved understanding of Earth's structure, atmospheric interactions, and geologic hazards. “There are still many questions about Earth for which only seismic data can provide answers,” says Ringler.