One of the most seismically active parts of the United States is an area you’ve probably never heard of — California’s Coso geothermal field. Nestled between the towering Sierra Nevada range to the west and the low-lying deserts of Death Valley to the east, the Coso geothermal field sits above a shallow, hot, partially molten magma chamber that drives one of the largest geothermal fields in the U.S. With power plants operating since 1987, the Navy Geothermal Program Office keeps a close watch on seemingly ceaseless local seismicity.

When large earthquakes of magnitude-7.0 or greater strike anywhere from tens to thousands of miles away, seismic stations around Coso often record an uptick of tinier temblors. Well-documented examples include the nearby 2019 Ridgecrest earthquake sequence and the far off magnitude-8.8 2010 Chile earthquake. To explore possible mechanisms for how large faraway earthquakes can trigger small ones near Coso, seismologist Richard Alfaro-Diaz examined 13 years of seismic data as part of his doctoral work. He and his colleagues focused on 211 global earthquakes greater than or equal to magnitude-7.0 that occurred between 2004 and 2016, as listed by the National Earthquake Information Center. 41 of these large earthquakes remotely triggered 311 small ones in and around the Coso geothermal field. 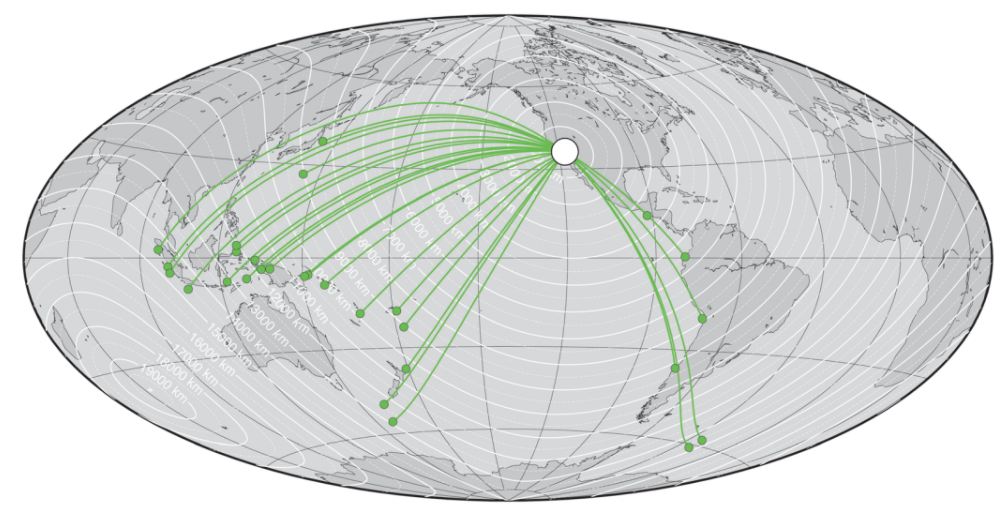 Their results, recently published in Journal of Geophysical Research: Solid Earth, indicate that these 41 triggering earthquakes mostly originated in the Western Pacific and South American regions (Figure 1). The waves that emanated from these seismic sources aligned with Coso’s local stress field to increase movement along brittle faults in and around Coso.

“The operational Coso geothermal field spans approximately 50 km2,” says Alfaro-Diaz, which is slightly smaller than the city of Ridgecrest in California. However, the study area includes the 15,000 km2 region around Coso (between the size of Connecticut and New Jersey). This expanded study area resides in the transition from the complicated Walker Lane region, dominated by strike-slip behavior, that runs along the border of California and Nevada, and the extending continental crust of the Basin and Range province that includes the linear mountain ranges and valleys of Nevada and Utah. The fluid-filled faults and fractures that slice through the upper three to four kilometers of crust around Coso move in ways characteristic of both zones — lateral motion on near-vertical faults and the up-down movement along shallower planes as the crust extends.

Alfaro-Diaz and his colleagues extracted information from 39 seismic stations from the greater Coso geothermal field region. These stations include both Southern California Seismic Network stations and EarthScope USArray Transportable Array stations. Data from Transportable Array stations are available from the IRIS Data Management Center. Station availability varied over the course of the 13-year study period “due to changing seismic station deployments,” says Alfaro-Diaz.

For each station, Alfaro-Diaz focused on the five hours before and after the arrival of seismic waves from each of the 211 magnitude-7.0 and greater earthquakes. This analysis included a detection algorithm applied to each 10 hour period, followed by visual inspection of the approximately 2,110 hours of waveform data to ensure they identified any quakes the algorithm may have missed.

To determine if a big, distant earthquake triggered any small events around Coso, Alfaro-Diaz and his colleagues first assumed that seismicity in Coso occurs randomly, at a constant rate. By using the five hours before the arrival of seismic waves from all 211 large, distant potential triggers, they calculated the average number of expected small events around Coso in a five-hour window. Then, they compared this expected number of events to actual quakes in each five-hour window after the arrival of seismic waves from the big earthquakes.

Of the 211 possible triggers, 32 correlated with an increase in the expected number of small quakes in the Coso region. An additional nine triggers had smaller events hidden in their surface waves, which could only be identified using data filters, according to Aaron Velasco, Alfaro-Diaz’s coauthor and thesis advisor. This brought the total number of triggering large earthquakes to 41.

In total, Alfaro-Diaz and his colleagues found 311 local triggered earthquakes around the Coso geothermal field. 57 were instantaneously triggered by the arrival of either shear waves or surface waves (Figure 2). The remaining 268 delayed triggered events occurred after the passage of seismic waves, but within the examined five-hour window.

Alfaro-Diaz and his colleagues noticed that these large, triggering earthquakes spanned magnitude-7.0 to magnitude-8.8, showcased assorted styles of motion, and varied in depth, ranging from 10 to 598 kilometers. These triggers shared one major feature—their back azimuths — which tells seismologists where the seismic wave sources originated. The large, triggering earthquakes mostly came from either the West Pacific or South America, indicating that the Coso geothermal field’s faults are likely to shake when seismic waves from these active regions propagate through.