In the early 1600s the “father of observational astronomy ,” Galileo Galilei, discovered the first four of Jupiter’s many moons using the recently invented telescope, which he refined and turned skyward. Galileo observed the moons we now call Io, Ganymede, Callisto and Europa, more than 390 million miles away. Today, Europa, the smallest of the four Galilean moons, entices scientists because as an icy ocean world, it may prove habitable. However, before sending instruments to explore Europa and other such ice-encrusted moons in our solar system, scientists must grapple with a host of technical challenges. For example, Europa’s temperature hovers between 86 and 132 Kelvin—a frigid -141 to -187°C. Europa’s Jovian orbit lies so far from the sun that solar-powered instrumentation will not work, requiring other forms of power. Unrelenting radiation—enough to kill a person after a single day’s exposure—would destroy any functional electronics within weeks of arrival. Undaunted by these obstacles, scientists plan to probe the thickness of Europa’s icy shell and the liquid beneath. Seismometers may be the tool of choice.

Before deploying instrumentation to this hostile surface, scientists must first investigate how seismometers fare in analogously ice-dominated physical environments. No perfect analog exists on Earth, but Gulkana Glacier, which flows along the southern flank of the Alaska Range 130 miles southeast of Fairbanks, comes close. It’s accessible, well-characterized, and has relatively thick ice sitting atop bedrock. The structure of that interface may mimic what scientists hope to find under Europa’s icy sheath. 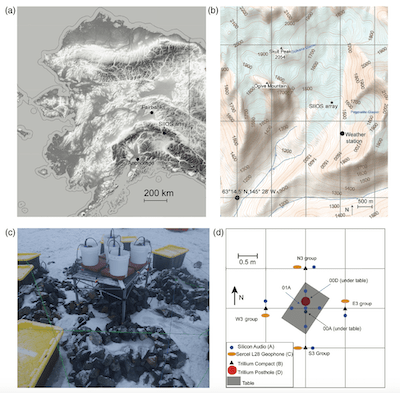 A team of researchers from the University of Alaska Fairbanks (now at Oregon State), University of Arizona, University of Maryland, University of Washington and Silicon Audio, a manufacturer of seismic equipment, headed to Gulkana Glacier in September of 2017 for project “Seismometer to Investigate Ice and Ocean Structure,” or SIIOS. Armed with 19 different sensors, nine of which came from IRIS PASSCAL, they installed three sets of seismometers and collected data for two distinct types of experiments. Their initial results, published in Seismological Research Letters, underscored challenges they encountered and will need to rectify, which is the first step toward the lofty goal of sending seismometers to an icy moon.

“From a planetary perspective,” says lead author Dr. Angela Marusiak, “traditional burial deployment [of seismometers] is really only feasible if you have a crewed mission or highly sophisticated robots.” Nevertheless, she and her coauthors installed the first set of seismometers in this manner by burying and protecting them. These instruments, she says, “serve as the main baseline [for the experiments], essentially representing the best case scenario for deployment.”

According to Marusiak, who was a doctoral student at the University of Maryland at the time of the study and is now a postdoc at NASA’s Jet Propulsion Laboratory, a small-array would be the next best option, like NASA’s Martian lander InSight, whose robotic arm successfully deployed a seismometer onto the Red Planet’s surface. To simulate such an array, Marusiak and her colleagues dug shallow holes in the ice, layered sand at the bottom, placed the sensors inside, and covered them with a plastic container weighted down by rocks. This installation reduced effects of wind, precipitation, and melting ice, while simultaneously mimicking Europa, which lacks an atmosphere.

The third scenario involves encasing a lander’s payload with an enclosure, or vault, that resides on the deck of the lander. Such a design would increase the lifespan of instrumentation by reducing effects of harsh radiation, and would reduce mechanical complexity, says Marusiak. “We used a mock-lander, [which was an off-the-shelf folding table], to simulate an on-deck, in-vault deployment,” she explains. She and her team placed the instruments in buckets and filled them with sand for stability. To reduce sliding if the mock-lander tilted, they placed bricks directly on the table, and the buckets on top.

Space missions require minimal mass and volume. “More mass means more fuel, which means more expensive,” says Marusiak. “You want smaller volumes so that you can fit more instruments or equipment in a smaller vessel,” she continues. Other considerations for seismometers include durability, ruggedness, low sensitivity to tilting, and a wide range of detected frequencies, explains Marusiak. For each deployment, they colocated small, flight-candidate sensors provided by Silicon Audio with the larger Earth-focused sensors lent from IRIS PASSCAL.

To assess the efficacy of their sensors in these three arrays, the team first conducted an active source experiment. After installation of the arrays, a team-member bashed a twenty pound sledgehammer (9 kilograms) into a half-inch aluminum plate at carefully measured locations around the seismometers.

For the second, passive, experiment, they left the seismometers for 13 days to see how the instrumentation fared. Upon retrieval, the team noted four instruments ceased recording due to power loss. Only three stations recorded on all channels for the duration of the experiments, and only one of the 19 instruments remained level. The stations on the mock-lander all rotated between 5°-50°. The stations installed directly on Gulkana Glacier recorded less noise than those on the mock-lander, in part because of movement of the table itself.

Still, the passive experiment recorded multiple events further than 1000 kilometers away, including a magnitude-7.1 earthquake in Mexico. The space flight-candidate instruments performed comparably to the other seismometers.

The team continues their analysis of local seismicity on and around Gulkana Glacier, the structure of the ice and ice-rock interface, and comparison of data collected by the various arrays. These data are accessible via the IRIS Data Management Center.

The team also undertook a second field campaign in northwest Greenland, where they coupled instrumentation directly to the mock-lander and made other modifications to their deployments, says Marusiak.

Figure 1. (a) Map of Gulkana Glacier and the location of the experiment ‘Seismometer to Investigate Ice and Ocean Structure’ (SIIOS) array relative to Fairbanks, Alaska, and Anchorage, Alaska. (b) Topographic map of Gulkana Glacier with coordinates of the center of the SIIOS array. (c) Photo of equipment installed on Gulkana Glacier. Ground-based instrumentation are buried in sand, covered with a protective plastic container, with rocks placed on top. Yellow action packers held data logging units supplied by IRIS PASSCAL. Credit: N. Schmerr. (d) Schematic of photo in (c) with stations labeled by type of seismometer.