The awe-inspiring dance of many-colored lights across the northern night sky, known as the aurora borealis, starts its journey at the sun, more than 90 million miles away. A hot stream of ionized gas, or plasma, called the solar wind, hurls itself from the sun's corona into space. 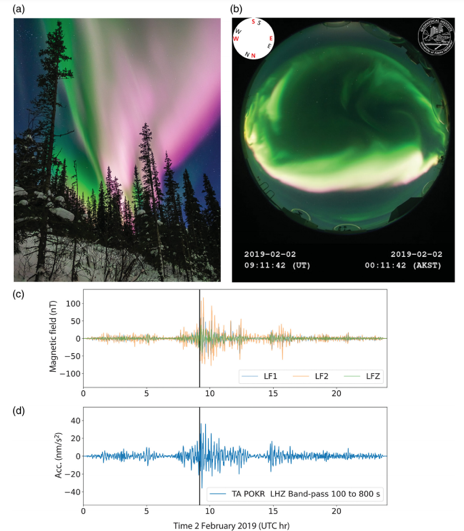 Earth protects us from this high energy torrent of protons, electrons and other subatomic particles with the geomagnetic field, which deflects the solar wind around our planet. However, near the north and south poles, the magnetic field lines emerge from the surface, funneling these particles into the Arctic and Antarctic atmosphere. The sun-sourced ions—mostly electrons —collide with neutral atmospheric gases, “exciting” the gases’ own electrons to higher energy levels. As the excited electrons return to their lower energy state, they release photons, or visible light, causing the ether to glow (Figure 1). According to scientists at the U.S. Geological Survey and the University of Alaska, Fairbanks, high-latitude seismometers typically tasked with peering inside the earth can record these electromagnetic undulations in the sky.

Though seismic stations are designed to measure waves produced from earth-shaking sources like earthquakes, volcanoes, and nuclear explosions, they also record “noise" that can obscure some of the subtle ground motions they’re meant to see. Perhaps no one knows this better than Adam Ringler, a seismologist at the U.S. Geological Survey Albuquerque Seismological Laboratory, who, along with his colleagues, has explored the effects of temperature, wind, and atmospheric pressure changes on seismic data.

Unlike Transportable Array stations, many permanent seismic stations designed to make both short- and long-period observations include a rather expensive shield of mu metal, which is a nickel-iron alloy. This protective sheath provides a path for the magnetic field lines, diverting the radiation away from the sensitive instrumentation. Because Alaska’s Transportable Array is a temporary deployment, the high cost—$2000 per station—and installation complexities prohibit using these shields to protect against the whims of the earth’s magnetic field. As such, Ringler says that this network should be “particularly susceptible to recording space weather events.”

To explore this problem in detail, Ringler and his colleagues focused on a station near Fairbanks, Alaska—called COLA—which is jointly managed by IRIS and the U.S. Geological Survey. This station boasts a magnetometer, which monitors changes in the magnetic field, and two seismometers—one shielded and one unshielded. At long periods, data from the unshielded seismometer’s vertical component (the one that records up-down motion) did not mirror that recorded by the shielded seismometer. Rather, the unshielded seismometer’s data matched changes in the magnetic field, as recorded by the nearby magnetometer. From this correlation, Ringler and his colleagues concluded that between periods of 40 to 800 seconds, Transportable Array seismograms do not only record ground motion, but also changes in Earth’s magnetic field. “We only want to record ground motion,” says Ringler. “When the magnetic field is showing lots of changes,” he says, subtle seismic signals become buried in the noise. The ground-based seismic stations instead capture the electromagnetic field as it ripples across the sky.

In a complementary study lead by Carl Tape of the University of Alaska at Fairbanks, he, Ringler, and coauthor Don Hampton exploited this solar-sourced noise by combining data from all of Alaska’s Transportable Array stations with 13 magnetometers and six all-sky cameras (Figure 2). The all-sky cameras, designed to capture continuous high-resolution visible imagery of a wide swath of night sky, stare upward alongside magnetometers that measure the changing magnetic field on the ground. Together, these two tools keep track of space weather, which encompasses the ever-present, ever-changing streams of incoming solar radiation. In some cases, a Transportable Array seismic station sits near both of these aurora-monitoring instruments.

Tape and his colleagues examined these three different datasets in concert, focusing on three bursts of auroral activity imaged in the night sky by the all-sky cameras and detected by the magnetometers. Across the entire state of Alaska, seismic stations on the ground recorded these space showers in their long-period datasets.

“As it turns out, whenever there is a strong aurora in the sky, there tends to be perturbations in the ground-recorded magnetic field, which, in turn, manifest themselves on seismometer recordings,” says Tape and his colleagues in their paper. Although the correlation is qualitative, extracting quantitative information about the magnetic field from the Transportable Array may be possible. Because of the large number of seismometers in Alaska, a close look at the long-period seismograms could help scientists reconstruct how the magnetosphere has behaved at a much higher spatial resolution than possible with only the currently installed magnetometers and all-sky cameras, says Ringler. This would be possible at least as far back as 2017, when IRIS completed the Alaska Transportable Array deployment.

Solutions to the magnetic problem

By eliminating or correcting for this magnetic-induced noise, scientists would be able to use Alaska’s long-period data for its intended purpose, which includes monitoring for long-period motion from distant earthquakes and keeping watch for in-state landslides, says Tape. As mentioned above, trying to eliminate the noise via shielding would be logistically difficult and too expensive. This method isn’t foolproof, either, says Tape, because “the shields will probably not block the largest magnetic storm events.”

Instead, both Ringler and Tape advocate for installing more magnetometers alongside some Transportable Array stations, which would cost $700 per instrument. So long as each station is within approximately 200 kilometers of a magnetometer, Ringler and his coauthors demonstrated that the magnetic signal can be removed. This option would serve dual purposes of rescuing long-period seismic signals from the noise while simultaneously allowing geomagnetic scientists to observe the magnetosphere’s behavior through seismic and magnetic methods with much higher spatial resolution than has previously been possible. This would let scientists keep tabs on space weather and its associated threats to humans, including communication disruptions, surges in the electrical grid, and satellite damage.

Figure 1. Optical, seismic, and magnetic data for auroral activity in central Alaska, collected on February 2, 2019. (a) Photo of an aurora taken at 09:11 UTC by Aaron Lojewski near Poker Flat. Direction of photo is to the northwest. Oxygen in the atmosphere emits the green and red streaks, whereas nitrogen causes blue auroras. (b) Poker Flat all-sky camera view from approximately the same time as the photo. (c) Magnetometer data from COLA, which is approximately 20 kilometers from Poker Flat (Fairbanks). The components are vertical (LHZ), and north (LF1), and east (LF2). Black lines indicate the time of the photographs. (d) Vertical-component seismic data from Poker Flat.