Earthquakes and volcanoes of the Galápagos Islands

The Galápagos Islands are well known for their scenery, unusual wildlife and scientific history, but the volcanoes that formed the islands are at least as interesting as the giant tortoises. The 7 active basaltic shield volcanoes of the Galápagos are some of the most rapidly deforming volcanoes in the world, but due to the scarcity and spacing of seismic instrumentation in this very remote region little was known about the earthquake activity associated with their deformation. 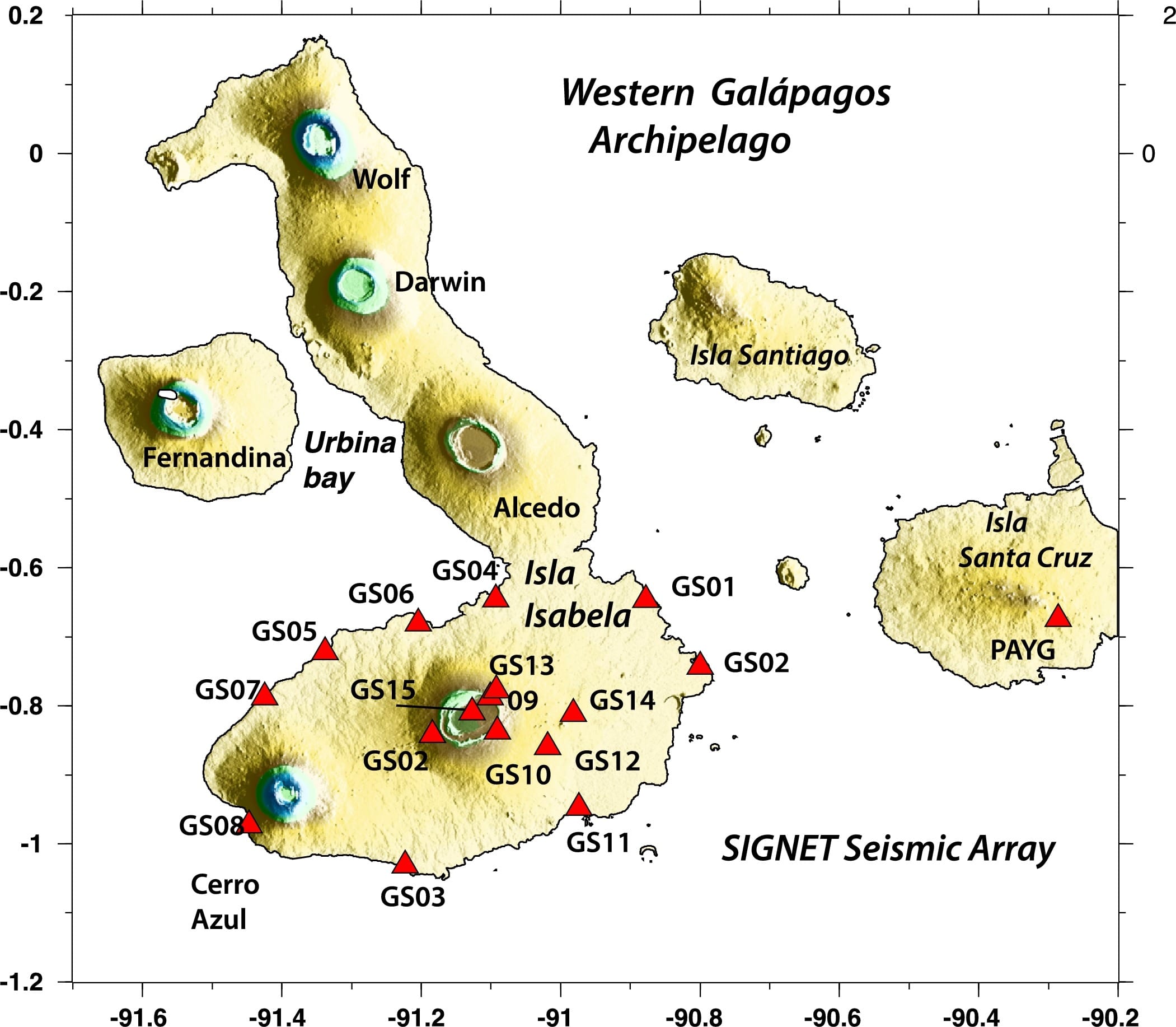 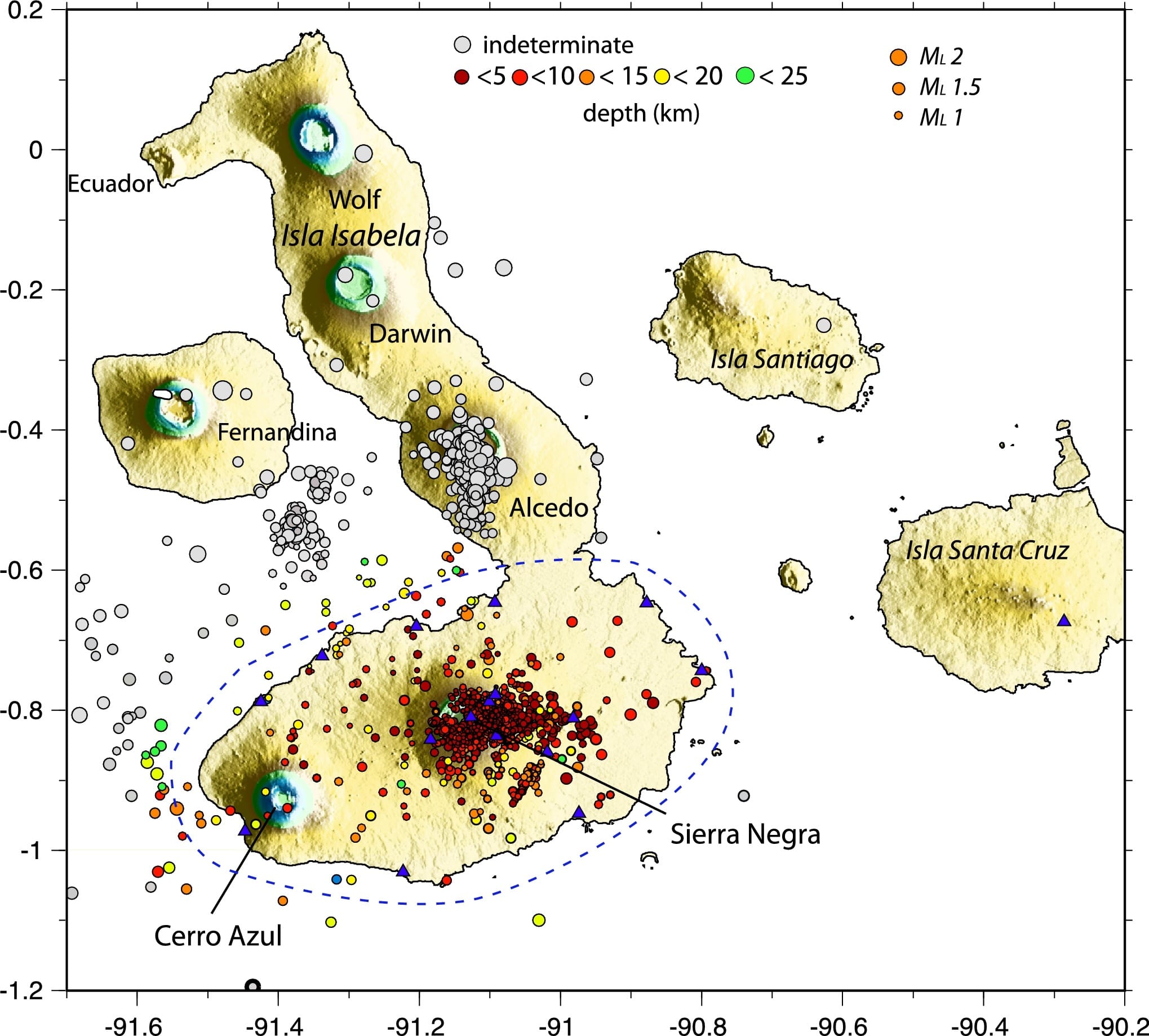 To provide better constraints on earthquake size and location, a temporary network of seismometers (Sierra Negra Integrated Geophysical Network; SIGNET) from IRIS PASSCAL and the University of Rochester was deployed around two of the most active Galápagos volcanoes; Sierra Negra and Cerro Azul. Between 2009 and 2011 these instruments, and instruments from the global seismographic network (GSN), recorded 2382 local earthquakes. These earthquakes, coupled with existing geophysical data from seismic tomography, InSAR and geodesy give insight into the subsurface structure of the volcanoes. The authors surmise that the volcanic complex beneath the Sierra Negra volcano is layered, with a shallow “melt-rich sill” between 1-2 km below sea level and a large magma chamber below that (Shown in Figure 3, below). This large “crystal mush” region supplies most of the magma for the volcano. This layered pattern is seen in other ocean island volcanoes, like those of Hawaii and Iceland. The new seismic data set is also helping to resolve questions about brittle deformation during periods of volcanic inflation and deflation. Large magnitude earthquakes (> M4) seem to occur primarily during eruptions or when large amounts of magma are being intruded beneath the volcano. Smaller earthquakes occur in swarms beneath the volcanoes Alcedo and Fernandina as well as between Sierra Negra and Fernandina. This study also found that significant and measurable volcanic deformation occurs mostly aseismically, which suggests that damaging earthquakes are unlikely between eruption cycles. 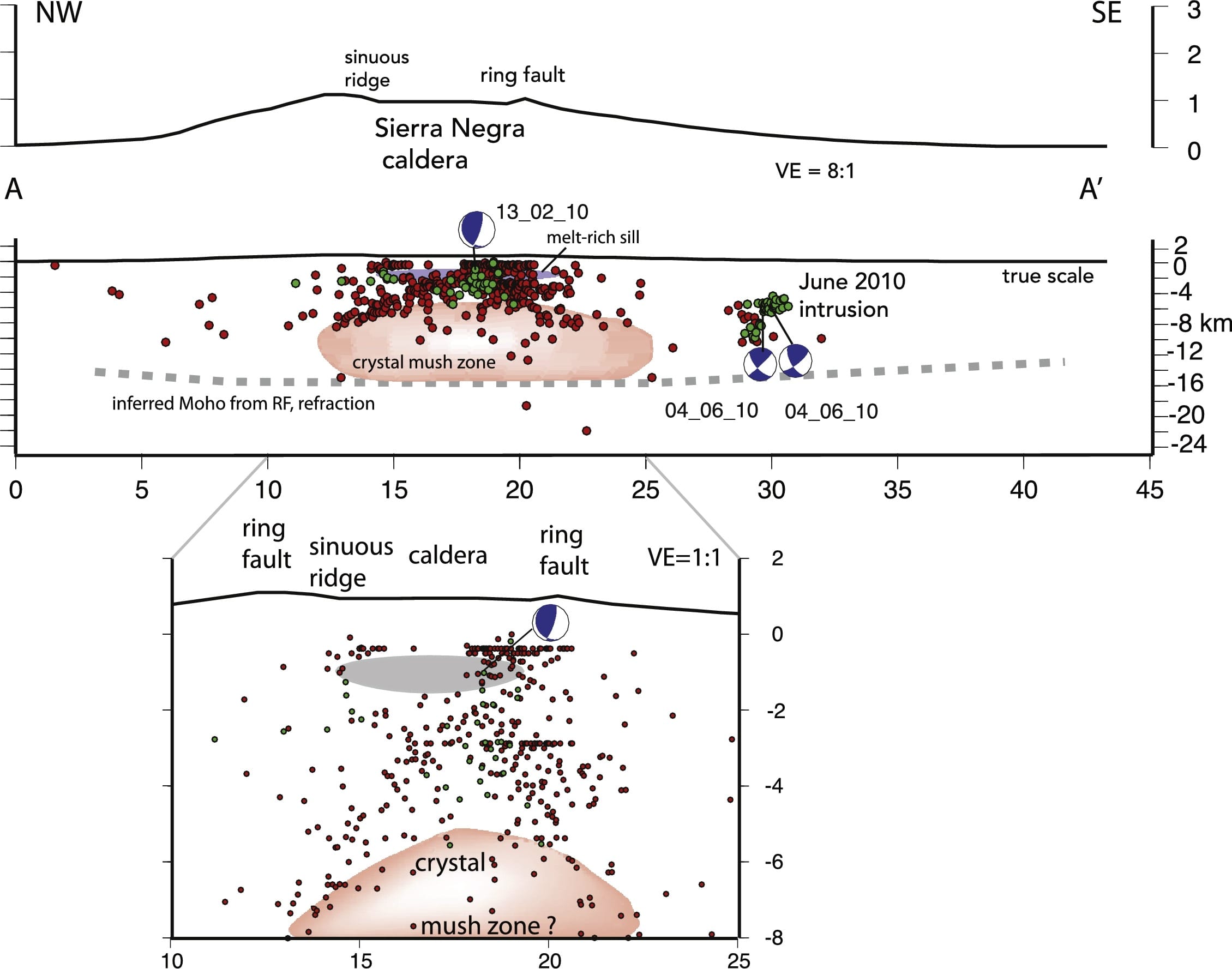 Cover Image: SRTM image of the Sierra Negra and Cerro Azul Volcanoes on Isla Isabela in the western Galapagos Archipelago. Eruptive volcanic features like vents and cones are indicated by stars. Also shown are earthquake focal mechanisms detected by the SIGNET array.

Figures 1 and 2 (Above): Active volcanoes of the western Galapagos Archipelago. The image on the left shows the SIGNET temporary seismic array that was deployed between July 2009 and June 2011. The station on Isla Santa Cruz labelled PAYG is a permanent GSN station. The image on the right shows earthquake locations. The size of the dot indicates the magnitude and the color shows the depth. The authors note that "the dashed line encloses the region with well-determined depths: earthquakes outside the dashed lines have large depth errors, or indeterminate depths (gray)".

Figure 3 (Above): Topography of the Sierra Negra Volcano. Earthquakes locations are shown as dots; earthquakes that were relocated using double difference are green. The melt-rich sill is shown in gray and the crystal-mush rich magma chamber is shown in pink.