Deep earthquakes in the depths of the ocean

Beneath the sparkling blue seas in the southern Pacific Ocean lies the mysterious underworld of the Tonga Trench – the second deepest place on Earth. It is part of the Kermadec-Tonga subduction zone, which is approximately 2000 km in length - the distance between New York City and Miami. The Tonga Trench is over 10 km deep at its lowest point, and is home to over 65% of the world’s deepest earthquakes. 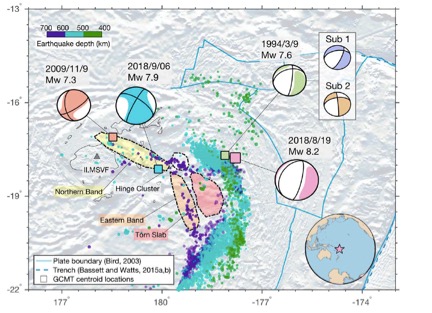 In the summer of 2018, two of the largest deep earthquakes ever recorded in this patch of the Pacific occurred within days of one another. The first, the Mw8.2 Tonga earthquake, struck on August 19, 2018 between the island nations of Fiji and Tonga (Figure 1). At a depth of ~580 km, it did not appear to negatively affect the local island populations. 18 days later, the Mw7.9 Fiji earthquake occurred ~273 km away (Figure 1). At a depth of ~680 km, this earthquake shook part of the ocean that has few recorded earthquakes. Deep earthquakes are often triggered, or caused, by other seismic events. Because the Mw7.9 Fiji earthquake occurred in a seismically “quiet” region, the most likely explanation is that the larger Mw8.2 Tonga earthquake triggered it, considering how close together they were in time and space.

Dr. Wenyuan Fan and colleagues decided to take a closer look at this seemingly related pair of earthquakes, and published their results in the March 2019 issue of Geophysical Research Letters. In their analysis that utilized seismic data downloaded from the IRIS DMC, they discovered that in spite of their similarities, including duration of the event, these earthquakes were actually quite distinct from one another.

The Mw8.2 Tonga earthquake’s rupture speed was hypersonic - 4.1 km/s – just slightly slower than the speed of a ballistic missile, and its numerous aftershocks, numbering over 250 events, rocked the deep subducted slab tucked beneath the ocean. On the other hand, the Mw7.6 earthquake’s rupture speed was merely supersonic - 2.5 km/s - and it produced very few aftershocks, none of which were near the hypocenter. Why would two earthquakes that occurred around the same time, and in the same geologic setting, have such contradictory characteristics?

Fan et al. found that the Mw8.2 Tonga event probably initiated in the coldcore of the down-going oceanic slab. This fault then ruptured into the warmeraseismic zone surrounding the slab, where the fault rupture continued in a more ductile manner. What could drive such faulting?

In the shallow crust, earthquakes are characterized by brittle failure. When the crust breaks, the earth quakes. However, deep earthquakes are no longer in the realm of brittle deformation. They are much too deep, and the high temperatures and pressures force rocks to behave differently – they flow in a ductile manner. When geologists say “ductile,” imagine a child slowly pulling apart silly putty. The putty stretches and bends but doesn't break, thus exhibiting ductile behavior.

Additionally, minerals in the subducting slabs also change under different pressure and temperature conditions. In particular, olivine, which is a common mineral at the surface of the earth, undergoes a transition to spinel, which is stable at these great depths. But sometimes, the subducting slab will stay cold enough for olivine to descend deeper into the earth than it should. This is called “metastable” olivine, and when it suddenly transforms into spinel, it can result in something seismologists call transformational faulting. In the case of the Mw8.2 Tonga earthquake, it may have initiated by transformational faulting, where olivine suddenly changed to spinel. This created a weak zone in the cold core of the subducting oceanic slab, allowing slip to occur. The rupture then propagated into warmer surrounding regions, where a different physical mechanism must have taken over.

This style of earthquake, wherein a rupture begins in a cold part of the slab and moves to the warmer surrounding area, is common in the Kermedac-Tonga subduction zone, including a Mw7.6 earthquake in 1994.

On the other hand, the Mw7.9 Fiji earthquake was more likely the result of something called thermal shear instability, which caused a slower rupture sequence. The basic idea is that most of the energy released by the earthquake is dissipated by melting along the rupture instead of being radiated as seismic waves – more heat, less quake. The fault(s) itself is too hotto have any significant amount of seismic activity prior to the large earthquake, but once a rupture has been initiated, a large earthquake can occur. This style of deformation is similar to deep earthquakes off the coast of South America, where the subducting oceanic slab is much younger and warmer.

Instead, they hypothesize that the earthquake pair could be related through some aseismic process. Unfortunately, because aseismic processes by definition produce no earthquakes for us to measure, there are no seismic data to test this.  Further, the lack of seismic data limit the ability for seismologists to image the structure of the source region of the Mw 7.9 Fiji earthquake, shrouding it in mystery in the depths of the ocean.

Figure 1 (Above). Map view of the Tonga-Fiji region. The Fijian Islands are outlined in light gray on the west side of the map. The gray triangle, labeled MSVF, represents a permanent seismic station managed by IRIS/IDA on the island of Fiji. Tonga is hidden beneath the inset showing the study location. The colored squares show the locations of various earthquakes, including the Mw8.2 Tonga earthquake (pink) and the Mw7.9 Fiji earthquake (blue). Each square is also labeled with its focal mechanism, or beach ball diagram, which quickly shows seismologists the style of faulting and direction of the fault plane.  The solid blue lines show all the different tectonic plate boundaries in this region, and the dashed blue line shows the location of the trench. The Northern band, Eastern band, and Hinge cluster are three seismically active regions related to an old subduction zone that is no longer in existence. The Torn slab is an aseismic region. The remaining purple, green and blue dots represent other earthquakes, and are color-coded by depth. The further away from the active trench, the deeper the earthquake should be.

Published on May 29th, 2019 Archived Stories