A tale of time and magnitude

Their seismic analysis focused on the SCARDEC database (Vallée et al., 2011), which utilizes broadband seismic data from IRIS to generate “source time functions.” A source time function is a plot of rate versus time, and tells seismologists how fast an earthquake rupture grows throughout the event. Instead of growing at a single speed, earthquakes speed up (accelerate) and slow down (decelerate). Melgar and Hayes (2019) calculated acceleration (or deceleration) from source time functions for earthquakes greater than around M5.5 (Figure 1) at different times after an earthquake started. In plots of acceleration versus magnitude for earthquakes in the SCARDEC database, which numbers more than 3,000 earthquakes, they noticed that at 2 seconds and 5 seconds, there was no consistency in the slope of the median trend (blue stars in Figure 1). However, after 10 and 20 seconds, the trend remains steady. This signals that a relationship exists between acceleration and magnitude that becomes apparent between 10-20 seconds. They verified this relationship by doing the same calculations with other source time function databases, which yielded the same results.

For the geodetic portion of their analysis, they examined high-resolution global navigation satellitesystem (HR-GNSS) data, which provides highly accurate - within 1 cm - information about ground motion. They were only able to analyze 12 M7+ earthquakes because no other HR-GNSS data were available. Despite this limitation, they corroborated their finding from the seismic data - that a scaling relationship exists between magnitude and acceleration. In Figure 2, which plots peak ground displacement (think of this as maximum amount of movement of the sensor) versus time after the first P-wave arrival, each of the magnitude bins (different color lines) diverges after around 10-15 seconds. The largest earthquakes (M8.8-9.1) have much greater motion than the large earthquakes (M8.1-8.3) Certainly, by 20-25 seconds, the motion recorded by HR-GNSS sensors between different bins is distinct.

How soon is too soon?

Previous work by Meier et al. (2017) implied that all earthquakes start the same, whereas Melgar and Hayes (2019) suggest that earthquakes with different final magnitudes quickly distinguish themselves within the first 10s of seconds of onset. This seemingly subtle difference in the level of determinismis key to the issue of earthquake early warning systems. In the model of Meier et al. (2017), approximately half the duration is required to predict final magnitude. As an example, imagine a M8.6-8.8 earthquake that might take ~160 seconds to rupture. Half the source duration, required for the Meier et al. (2017) method for an accurate final magnitude, would be ~80 seconds, whereas in the model proposed by Melgar and Hayes, they would only require about 15 seconds. Every second counts in earthquake early warning systems, where predicted magnitude dictates how much of the population must be warned of impending shaking and/or tsunamis.

Implementation of the Melgar and Hayes model, however, will be tricky. Source time functions cannot be calculated in real-time. The analysis could be done with HR-GNSS, but the vast majority of these very large earthquakes take place in subduction zones, where most of the rupture is under water. Instead of HR-GNSS as a means to calculate vertical displacement, Melgar and Hayes suggest using alternative technologies, such as ocean-bottom pressure sensors, which could measure the change in pressure exerted by the water column above the sensor. However, the infrastructure to communicate this information to seismologists in real-time, which would require fiber-optic cables from shore to the ocean and back, does not exist in most places, Melgar says. And such infrastructure is quite expensive. This highlights the need for new measurement techniques, outside of traditional seismology, which would help test this model as a means of improving earthquake early warning systems for large and very-large earthquakes. 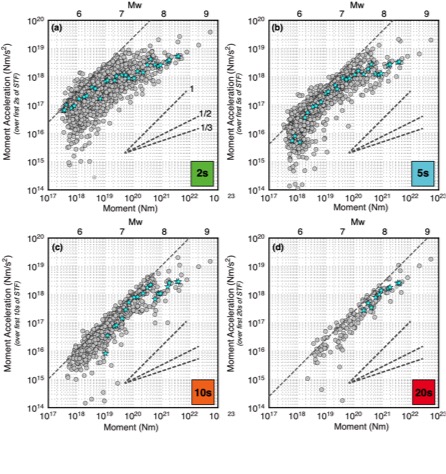 Figure 1. Acceleration versus magnitude (magnitude is listed above each panel, along the x-axis) at different times after rupture commenced. All dots are individual earthquakes from the SCARDEC database. The blue stars are median values. The trend of the blue stars changes between panel (a) and (b), but by (c) and (d), the slope is consistent. ​ 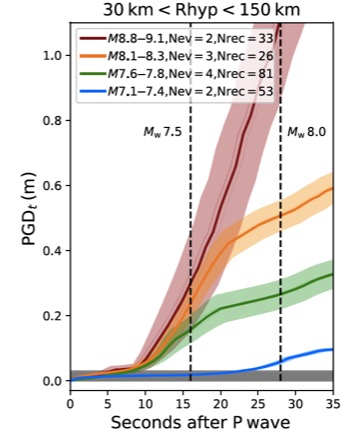 Figure 2. Peak ground displacement versus seconds after first arrival of P-wave at HR-GNSS sensors. Each color-coded bin lists Nev - number of events and Nrec - number of receivers. The dashed lines indicate roughly half the source duration magnitude 7.5 and magnitude 8.0 earthquakes. The ground movement between the very large (red bin) and large (orange) earthquakes has already diverged well-before the half-duration of the magnitude 8.0 earthquake dashed line.