The Orphan Tsunami of 1700 - A Trans-Pacific Detective Story

Just a quarter century ago, hardly anyone suspected that a giant underwater earthquake – or the fast-arriving tsunami that such an earthquake would spawn – could ever occur in the Pacific Northwest. The region’s written history, which begins a few decades before the arrival of Lewis and Clark, is devoid of such catastrophes. Yet today the Northwest has a widely acknowledged history, thousands of years long, of earthquakes as large as magnitude 9 and of associated tsunamis. That history is spurring efforts to make the region’s buildings more earthquake-resistant and its coastal communities tsunami-resilient.

These public-safety efforts stem from a scientific detective story pieced together from clues on both sides of the Pacific. In North America, the remains of sunken marshes and forests tell of Pacific Northwest earthquakes that lowered coasts by a meter or more. Sheets of sand on the buried marsh and forest soils testify to associated tsunamis that ran across the freshly lowered landscape. In Japan, too far from North America for its parent earthquake to be felt, an orphan tsunami three centuries ago registered in the writings of samurai, merchants, and peasants. Their exactly dated accounts provide evidence that the most recent of the Northwest’s great earthquakes occurred on January 26, 1700, and that this earthquake attained magnitude 9.  Thanks to these and other discoveries , great earthquakes and their tsunamis can no longer take the Pacific Northwest by complete surprise. 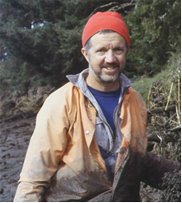 Brian Atwater is best known for using coastal geology to help identify and define earthquake and tsunami hazards in the Cascadia region of British Columbia, Washington, Oregon, and California. This work has included comparative studies in Alaska, Chile, and Japan.

His USGS monograph on great earthquakes in Washington State won the Kirk Bryan award of the Geological Society of America. He also produced a widely used public-safety booklet, “Surviving a tsunami—Lessons from Chile, Hawaii, and Japan.”  His new book, “The orphan tsunami of 1700—Japanese clues to a parent earthquake in North America,” prepared with coworkers in Japan and the United States, colorfully presents the full story behind his IRIS/SSA lectures.

Atwater’s earlier research dealt with sea levels and glaciation in California and ice-age floods from Montana. He is a fellow of the American Geophysical Union and an affiliate professor at the University of Washington. He currently advises earthquake and tsunami scientists in Indonesia, Thailand, India, and Sri Lanka, under a State Department program to boost tsunami preparedness around the Indian Ocean.

Takada, K., and Atwater, B.F., 2004, Evidence for liquefaction identified in peeled slices of Holocene deposits along the lower Columbia River, Washington:  Bulletin of the Seismological Society of America, v. 94, p. 550-575.