The Global Seismographic Network has established in collaboration with Spain's Instituto Geográfico Nacional (IGN) a new GSN station, MACI, in the Canary Islands through the efforts of its US Geological Survey Albuquerque Seismological Laboratory team. The site includes both STS-1 (donated by IGN) and STS-2 seismometers and an EpiSensor Accelerometer. Data are acquired as part of a local seismic monitoring network by IGN and forwarded to the US, where they are openly available in real-time via the IRIS Data Management System.

STS-1 sensors, with the North-South, East-West, and vertical component each housed separately in one of the green enclosures at the end of the pier; an STS-2 in a blue, pressure-isolated enclosure; and an Episonsor acelerrometer (black in foreground) are deployed in the vault at Morro de la Arena, Canary Islands. Photo courtesy of Neil Ziegelman, Albuquerque Seismological Laboratory. 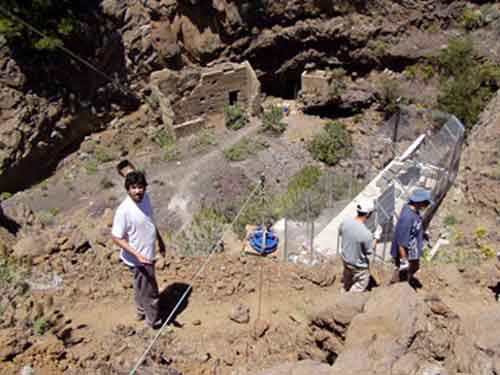 A 300-pound STS-2 base plate going down the cable way to the MACI tunnel entrance (shown at the end of the cable in the top center of the photo; the edge of the open door is just visible in the shadow). Ruined structures are from a 30-year-old water tunnel excavation, which was a total failure for its original purpose but ideal for the seismic instrument vault. Installation was performed by personnel from the Instituto Geográfico Nacional (IGN), with the cooperation of USGS personnel. Shown are, from left to right: Itahiza Francisco Domínguez Cerdeña, Victor Manuel Cabrera Rodríguez, and Enrique Ramón Romero Noda, all with the IGN. Photo courtesy of Neil Ziegelman, Albuquerque Seismological Laboratory.