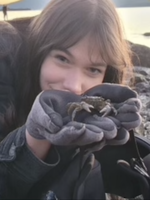 Ula Jones is a student at Western Washington University currently completing her research at Brown University under Dr. Colleen Dalton.

My project will examine Rayleigh wave propagation across Alaska, with the end goal of creating a number of tomographic maps of the state. This region is tectonically interesting because it contains certain features that are not fully understood, such as the role of the Yakutat Terrain in influencing subduction and the processes responsible for forming the Wrangell Volcanic Field. To do this, the travel times of Rayleigh waves from various earthquakes to Canadian and Alaskan seismic stations will be used to generate maps and eventually image variations in wave attenuation (amplitude decay) and velocity at depths between 30-200 km. These wave characteristics are linked to subsurface features such as temperature, composition, and the presence of water or partial melt; as such, they may help relate the interesting surface features to the underlying crust and upper mantle. Data primarily from the EarthScope Transportable Array taken between 2015 and 2021 will be used, and analyzed in Matlab.

So far, I've met or am in the process of meeting most of the goals I set for this summer, though I might cut it close with the final stage of my project next week. I definitely have a better understanding of surface waves and their propagation, principles of tomography in general (including other methods like receiver functions), and the geology and geography of Alaska. I have also had the opportunity to learn a lot of valuable coding skills, especially in Matlab, and I was able to gain some familiarity with GMT and Unix. I feel I improved in keeping my file systems organized in general as well. In terms of presentation, I created a preliminary research poster to present at a symposium tomorrow and submitted my abstract to AGU yesterday.

Our goal to image Rayleigh wave velocities in Alaska was definitely successful, and the resulting maps are closely linked to Alaska’s surface geology. I expect to continue with the interpretation process into the fall and up to AGU. I am currently working on imaging attenuation in a few interesting regions, but the amount of work I can get done in my final week will be limited by the speed at which the corresponding programs run. An unexpected programming challenge that I encountered this summer was simply runtime – last week I ran a program for 3 days only for the output to be useless due to a masking parameter that was set too high. I had expected low coverage running it on a few test files, so the final result caught me by surprise. 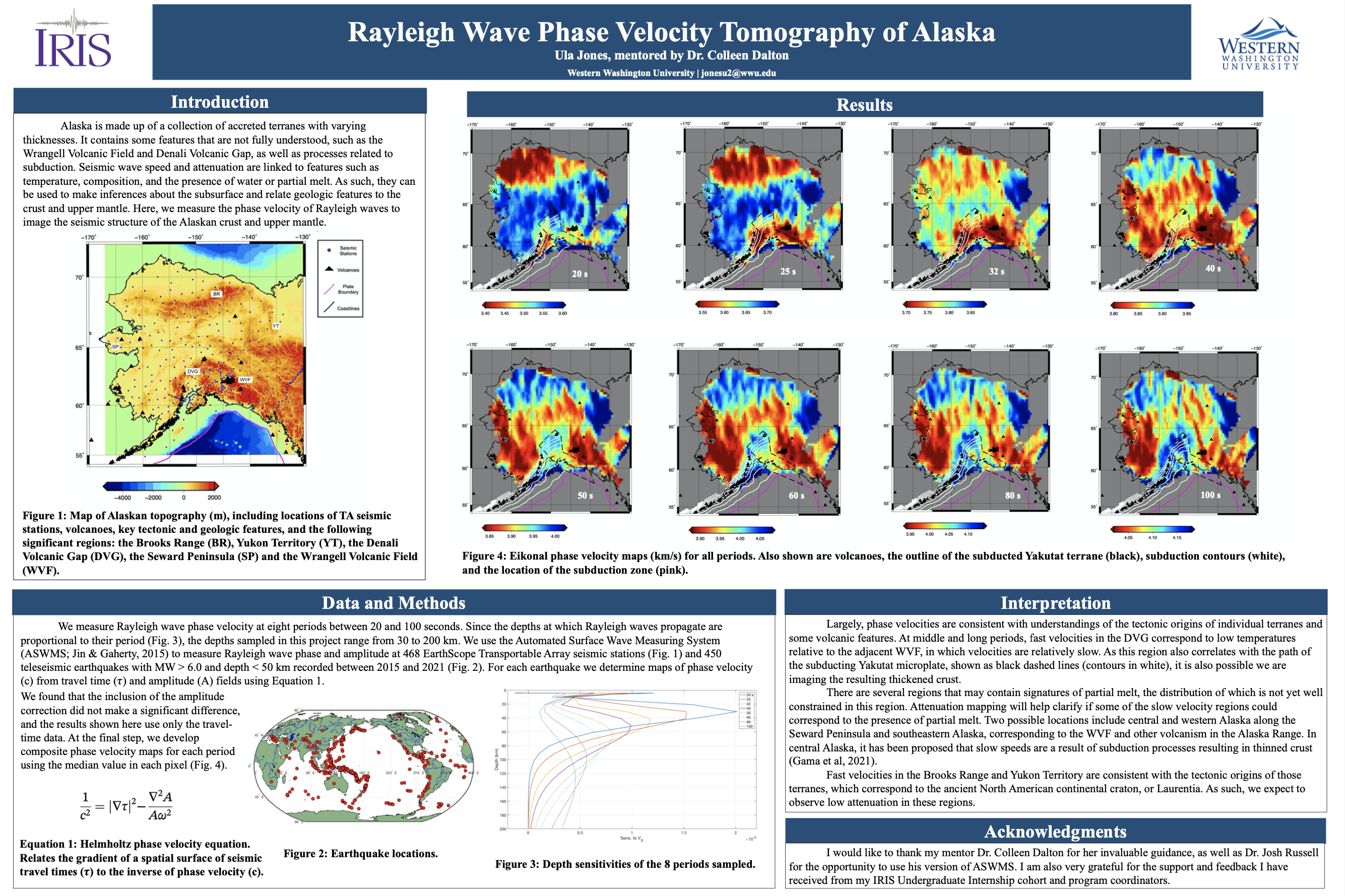 Here is my poster for the Brown undergraduate research symposium, which gives a good overview of this project up until now. I'm planning to use it as a starting place for my AGU poster.

This week I completed the outlier removal for my entire dataset and created 8 phase velocity maps for what turned out to be about 450 events between 2015 and 2021. I also read several papers about Alaskan tectonics and methods for analyzing the attenuation of seismic waves to prepare for the final third of this project, in which I will map surface wave attenuation in several parts of Alaska and interpret my results. There are already only two weeks to go until I present some results at Brown's summer undergraduate research symposium, so hopefully everything wraps up smoothly. 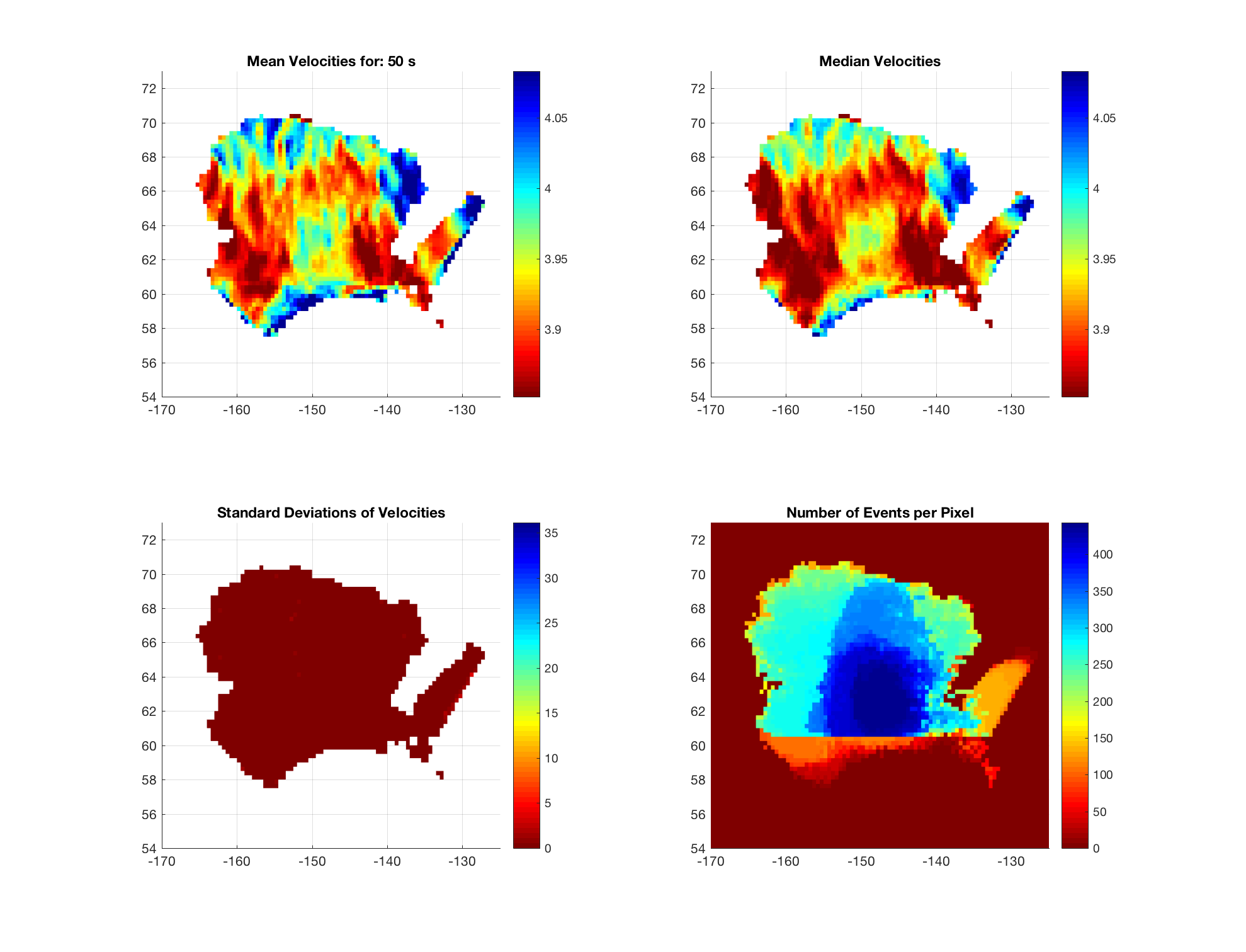 This is the final phase velocity map for the 50 s period. Unfortunately, due to an issue with our measurement fetching program, southern Alaska (<60 degrees) only has about a quarter of the number of measurements the rest of the state does at the moment. However, this dataset was exceptionally well behaved – its standard error map looks the best by far.

Since I started this project with only a little experience using Matlab, I have had the opportunity to develop a lot of programming skills. This definitely came with its challenges, but I was able to solve most of my coding problems by staying organized and reaching out for help when I needed it. Organizing my notes and other materials well is not usually my strongest point, but making an effort to improve this summer has predictably been helpful. I am also being challeneged by the East Coast heat wave and my apartment's lack of air conditioning right now, which makes it easy to spend lots of time in the lab! 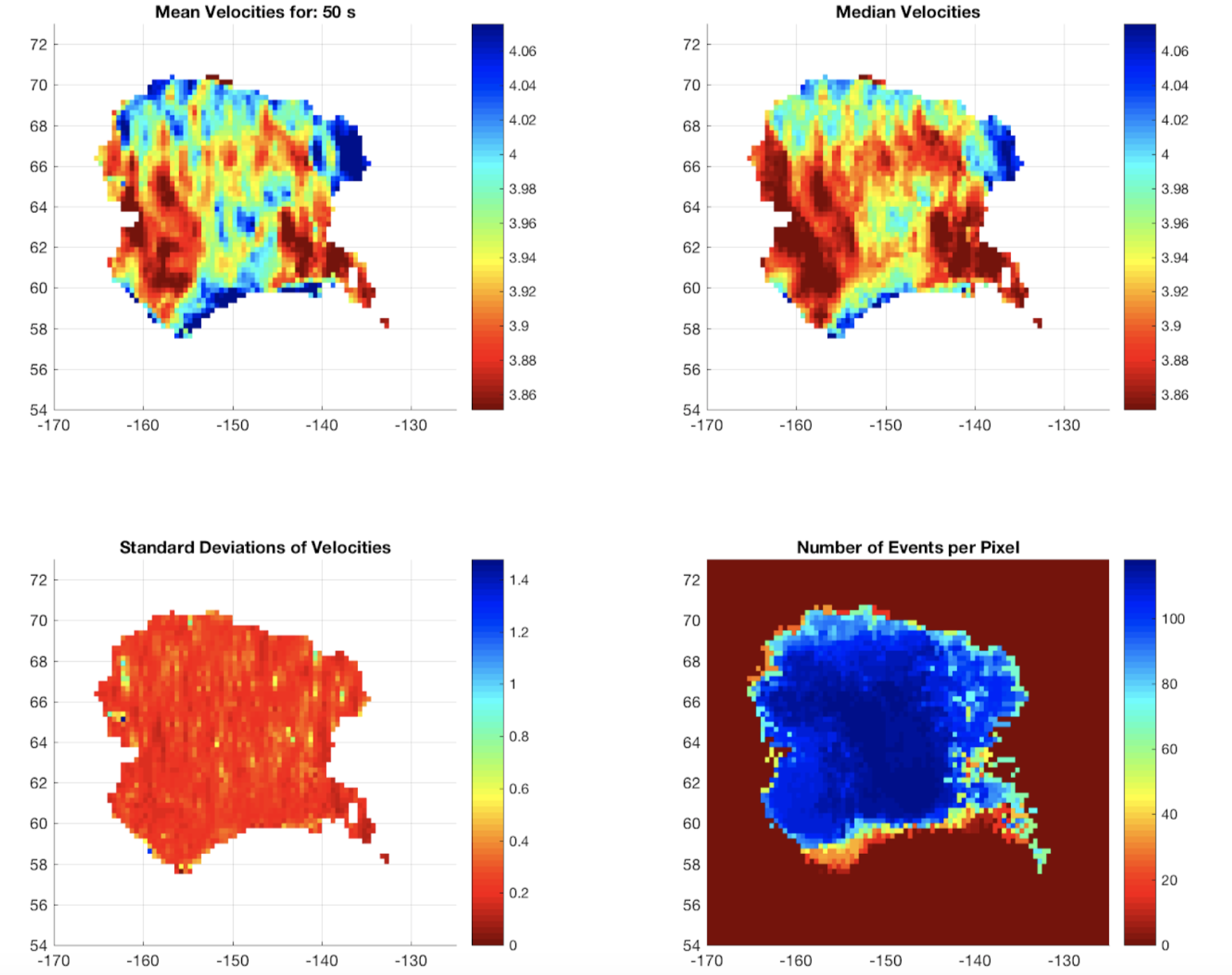 The figure that best represents my project up until now is this phase velocity map of Alaska for Rayleigh waves with 50 second periods. As surface wave periods roughly correspond to the depths at which they travel, this is an image of seismic velocities from 50 to 100 km in the subsurface. The median map is probably more representative of actual speeds, as mean values tend to be skewed towards higher velocities. Even though I am still compiling the rest of the events that will eventually be incorporated into an updated version of this map next week, it already shows a number of prominent features.
The most relevant study to my project is probably the 2019 paper “Long‐Period Rayleigh Wave Phase Velocity Tomography Using USArray” by Dr. Colleen Dalton and Dr. Jordyn Babikoff. This was a study that imaged Rayleigh wave velocities in the continental United States using almost identical methods to the ones I am using this summer. Using Eikonal and Helmholtz tomography, Dr. Dalton and her colleague found that seismic wave speed was very consistent with known geologic features and were able to describe the distribution of melt at depth in different regions. Some of these features included slow regions corresponding to the midcontinent rift and the Colorado and Columbia river plateaus, and fast regions associated with the central cratonic core of the continent. 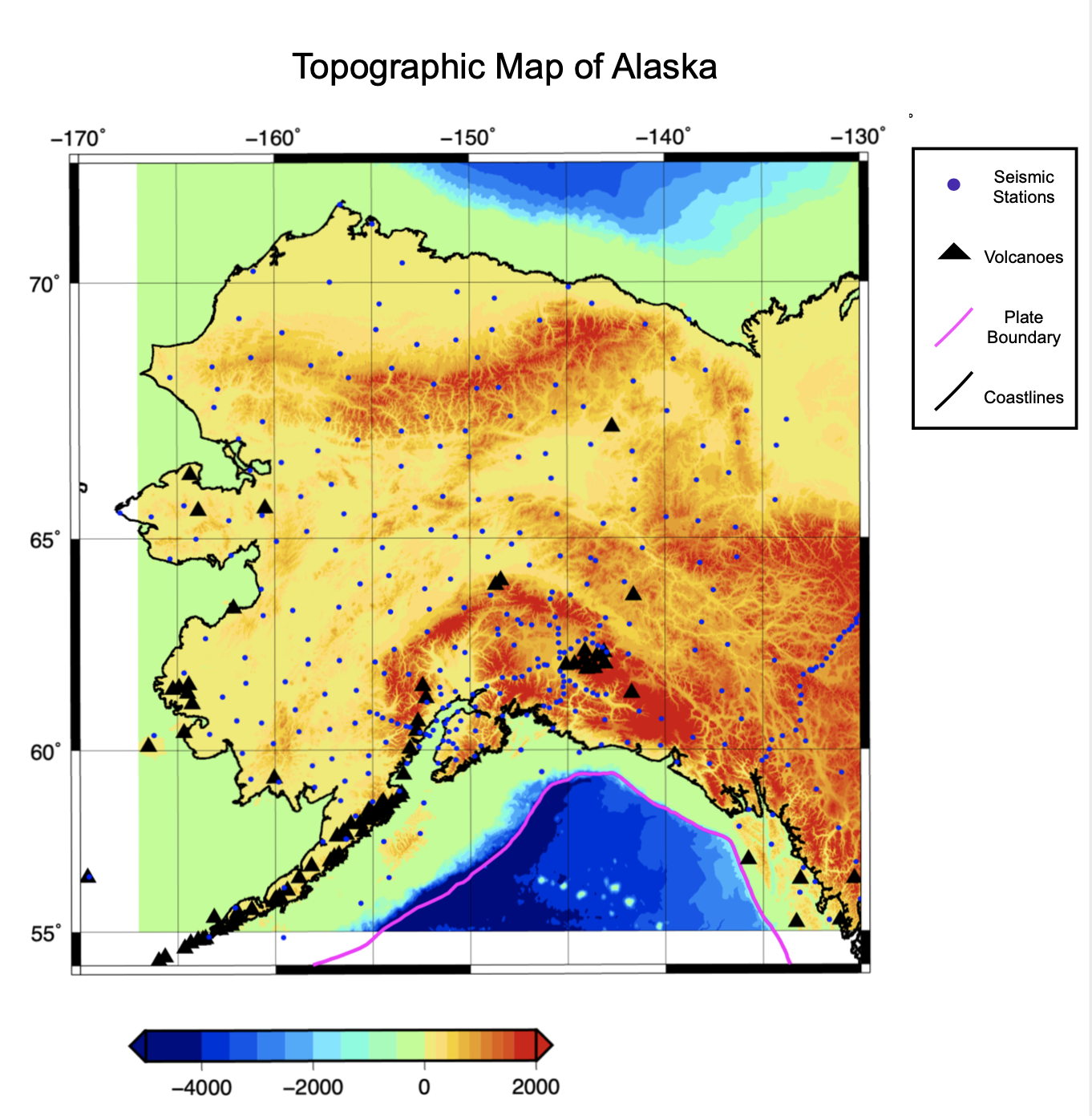 This is a topographic map of Alaska made in GMT that also shows the locations of large Alaskan volcanoes and the 467 seismic stations I am working with. The cluster of volcanoes in the southeast corner of the state is the Wrangell Volcanic Field, and the subducting Pacific plate is also shown with a pink line in the southeast.

This area contains very complex geology. It is an interesting region to focus on because some processes are not yet understood well, including those that form the WVF and some related to the Yakutat Terrane, a small allochthonous terrane that is accreting to the North American plate between the subduction zone and the WVF.

This week we reached a big milestone in producing the first preliminary composite phase velocity maps of the state for each period. I still have some refining to do, and the final maps will contain data from many more events than these do. Still, they are very interesting, and with few exceptions are consistent with prior research.

One challenge I have encountered in this process is the question of how much data from areas with sparse coverage is appropriate to mask out; for example, should the final phase velocity maps only include 0.5 by 0.5 degree pixels for which there are at least 4 or 6 seismic stations within 200 km? The answer makes a significant difference to the coverage of the final maps.

Drafting a short verbal description of my research project (elevator speech) was a bit challenging at this point, but a useful exercise. Trying to cut down jargon and still explain the process clearly helped me expose gaps in my own understanding of the directions this project is heading and narrow in on the most important ideas. The most difficult part was probably explaining our applications of some complicated math like the Eikonal equation. By the end of the summer I would like to have a finished script or two that will be useful for explaining the project both at AGU and to friends or family that might be interested.

This week contained the most involved data analysis I’ve done yet. I mostly worked on outlier removal, which involved looking at hundreds of maps with the velocity residuals of each station and removing anomalous points by hand. Now, I’m writing some code that will help create initial phase velocity maps for the different periods. I’m only working with about 100 events of the original 600, but I’m planning on doubling back to download and clean up the rest of the dataset sometime later this summer.

Here is a picture of my workspace in Brown’s Geochemistry building: 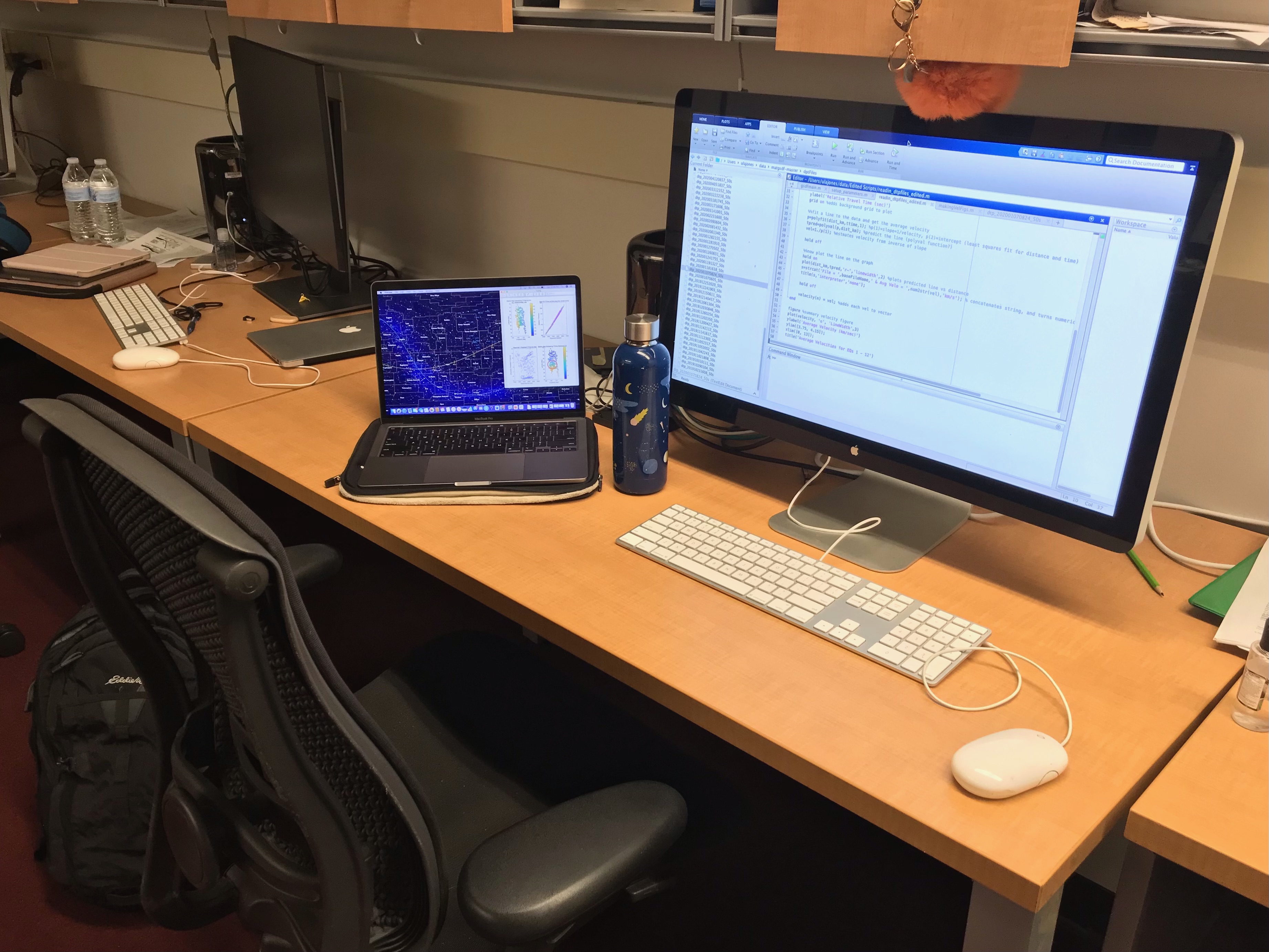 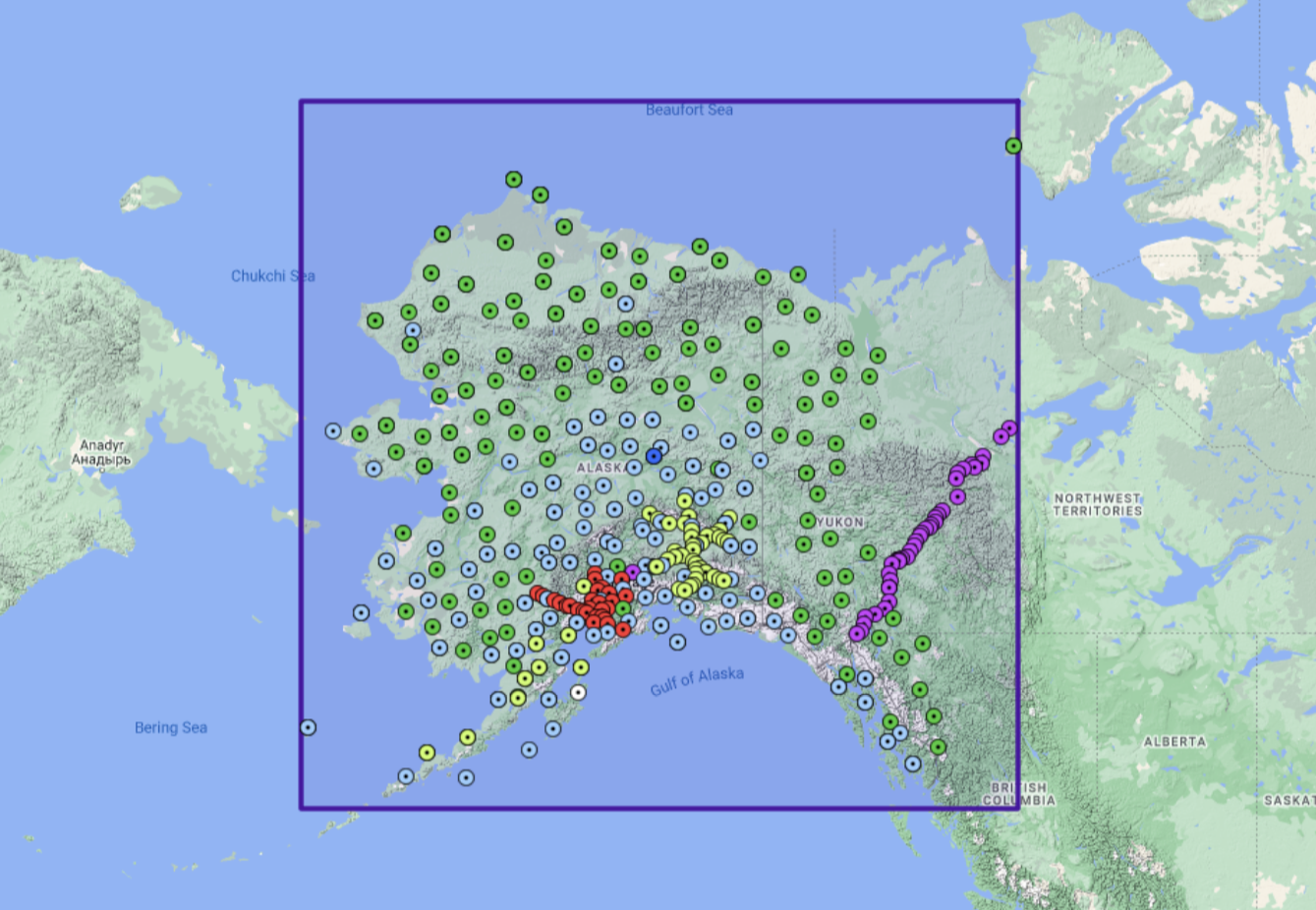 The dataset I will be working with this summer includes all events between January 2015 and June 2021 that were recorded by the _US-ALL network in Alaska. Most of these stations (the green ones) are from the US transportable array, but this dataset also includes other sub-networks as well. While mine will be the first project to analyze this specific collection of events, I’ve read several papers that also used similar data from these networks. Rayleigh wave arrival picks, cleanup, and waveform cross correlation are being done by the ASWMS program (Jin and Gaherty, 2015), a tomography software package available as a data product from IRIS. When this is done, I will do the eikonal tomography, stacking, and amplitude corrections by hand. Hopefully the large size of this dataset will be beneficial as it will allow us to resolve tomographic maps for the entire state with greater detail in the southern areas of interest.

So far, my work this summer has been particularly focused on data collection and data analysis/ evaluation. Demonstrating these skills proficiently could mean understanding and applying the relevant programs, or being able to code simple ones of my own eventually. I think I would need to be a bit further along to effectively critique this or similar work. However, I am already feeling more comfortable in Matlab using example data, so I am optimistic about working with my actual dataset despite the large size. Linux is also becoming much easier to navigate with the help of my mentor and the SSBW tutorials.

My first day has already been interesting — I’m starting this project by doing some relevant scientific reading to my project, some of which is by my mentor and has helped introduce me to her work and methods. A general plan for completing this project will be useful as I progress, so I am including one here.

For the first third of this internship (June 15th to July 6th), I would like to expand my background knowledge of surface waves, seismic attenuation, tomography, and subduction zone geology by reading relevant literature. I must also become comfortable using Matlab and Unix and acquire the waveform data during this time. In the second third (July 6th to July 27th) I will actually carry out the Rayleigh wave measurements/ analysis and visualize their propagation, and in the final third (July 27th to August 15th) we will construct the attenuation and phase velocity maps and interpret them in light of the relevant surface features. After this, I’ll still have work to do constructing a scientific poster and preparing to present this work.

I’m very much looking forward to the project and will be updating throughout. Good luck to the other participants!