During my internship, I will learn how to compile and analyze a data set of seismic phases that interact with mantle discontinuities beneath the Australasian region. The first phase of my project involves identifying suitable earthquakes, downloading the data, processing it by using existing codes and scripts, and then picking the data. Analyzing the earthquakes will require the use of existing codes to extract the seismic phases by stacking. This process will assist with identifying and measuring the depths of mantle discontinuities. The second phase of my project involves interpreting potential mantle compositions. This requires generating synthetic seismic phases, which are manipulated in the same way as real seismic data. In addition to generating synthetic seismic phases, various mantle compositions will be tested through the utilization of existing codes.

After completing my internship at ANU and reflecting on my experiences, the skills that I've developed will help me further down the road as I work towards becoming a petroleum geologist. My internship provided me an in-depth understanding of reverberated waves, which are heavily studied in the oil and gas industry. Furthermore, I analyzed the data that I collected through two  software programs commonly used in geoscience, Linux and Matlab. When I began my internship, my goals were focused on beocming familiar with a newly created data stacking method developed by my mentor and her co-worker. The challenges that I faced during this phase of my project involved becoming familiar with the coding programs that were used to modify the stacking codes. Once I overcame this, my goals were centered on improving the accuracy of the results that were produced from stacking.

The challenges that I've faced this summer involved becoming familiar with a field of study outside of my degree. Currently, I'm a mathematics major, and the learning curve that I've had to overcome was the terminology used in seismology along with the technology that seismologists use. Throughout the summer I adapted to my work enviornment by reading several journals in addition to collaborating with my peers at ANU. Overall, my experience at ANU has improved my skills with the computer programs Linux, and Matlab, and my project has provided me an in depth understanding of multiphase recverbrated waves.

I also overcame the challenge of planning a weekend trip to Sydney, and visited  the Sydney Opera House, Taronga Zoo, and Sydney Aquarium! 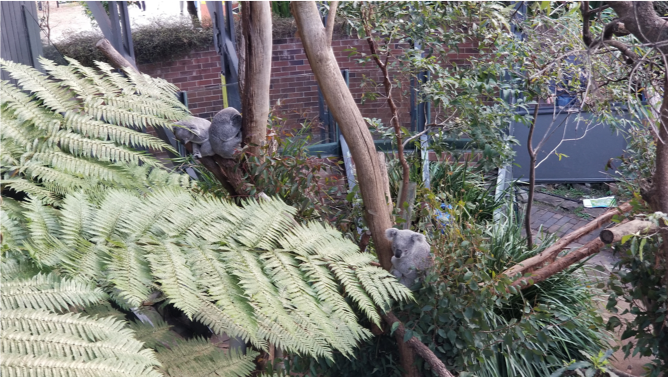 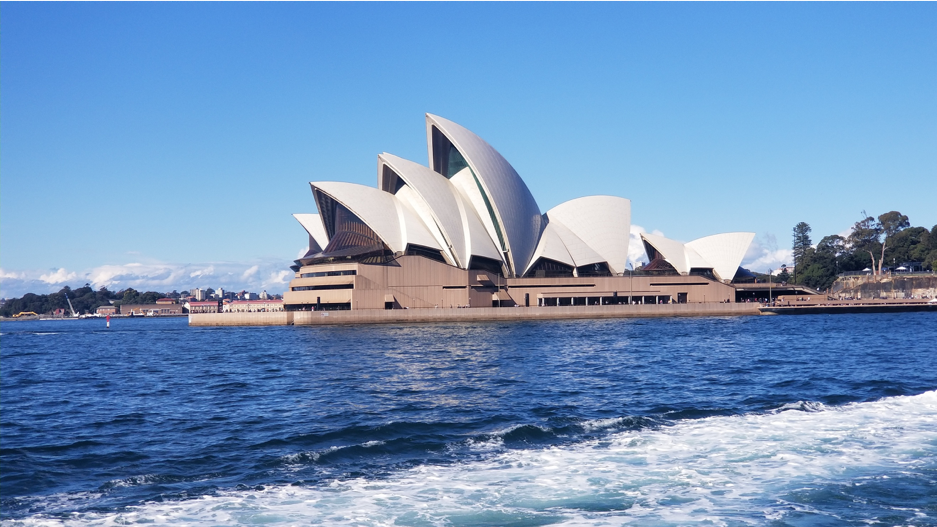 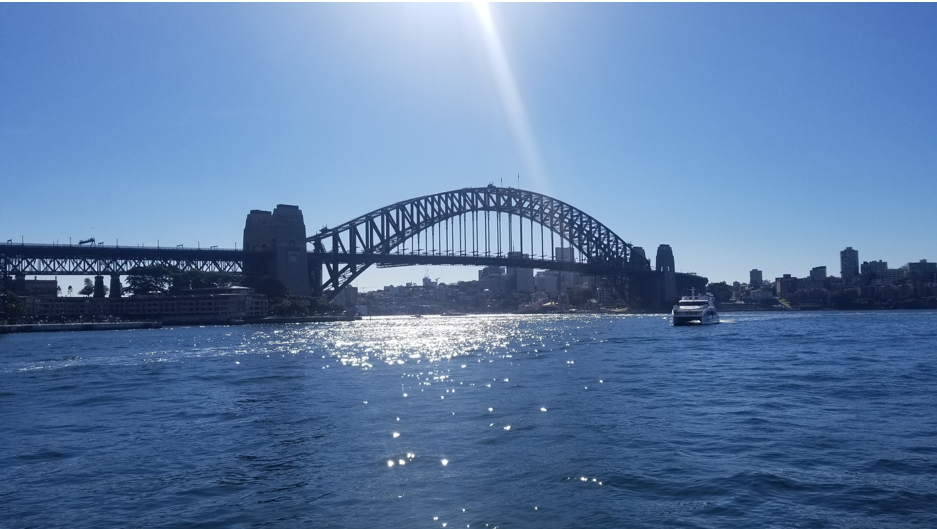 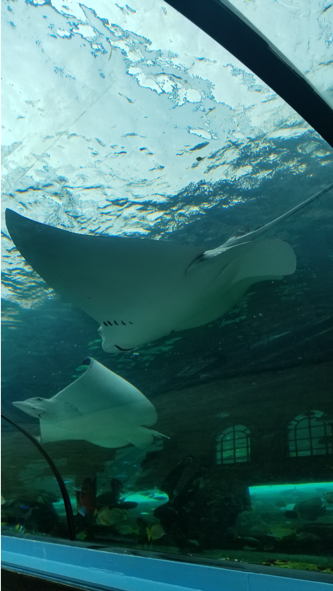 The delay in my week 4 blog post has been caused by downloading and processing large amounts of data for my GMT model. My data was collected from earthquakes that occurred in the Australasian region of Australia’s tectonic plate through IRIS’ data services webpage. The black dots in the GMT model below are the bounce points of ScSn reverberated waves from the seismic events that I collected. Reverberated waves are seismic waves that travel from Earth’s surface towards the core mantle boundary, and reflect off of the core mantle boundary back towards Earth’s surface. The subscript represents the number of times that the seismic wave reflected off of the core mantle boundary. The significance of understanding ScSn reverberations is that they provide information regarding variations in the depth of mantle discontinuities. One of the most common applications for this type of research is to classify faults within the Earth. In my project, I’m using this research to better understand mid-mantle discontinuities within Australia along with slab stagnation between Australia’s tectonic plate, and the Pacific tectonic plate. 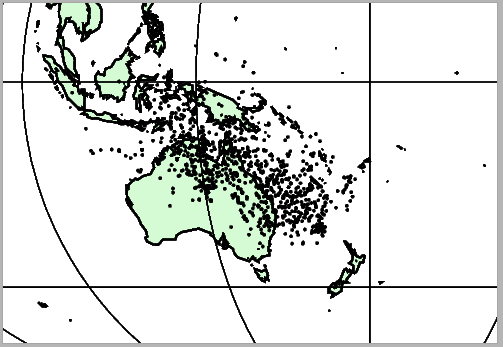 In addition to my GMT model, I’ve created a vespagram of the seismic waves that travel through Australia. The graph is designed to illustrate the horizontal slowness of an arriving signal. The reference point of the graph is an S wave, and the x-axis represents the amount of time the ScS waves and its post cursors occurred after the S wave. The y-axis represents the angle at which the seismic waves are arriving to seismic stations. Since the y-axis is negative, the angle that each reverberation is arriving to the seismic stations is steepening. 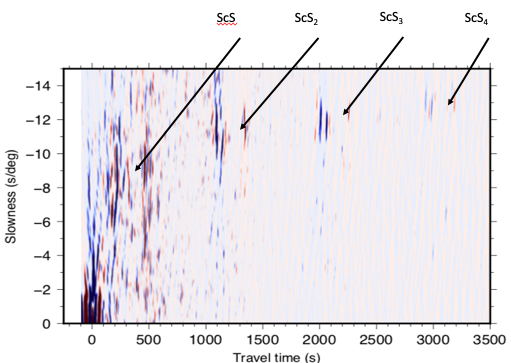 The research paper that best represents the project that I’m working on is called, Topography of the 410 km and 660 km Discontinuities Beneath the Japan Sea and Adjacent Regions by Analysis of Multiple‐ScS Waves, by Xin Wang, and Juan Li. The publication was focused on analysing the northwest Pacific subduction region, and how the subducting slab interacts with upper mantle discontinuities at 410km, and 660km. Wang and Li conducted their research by studying multiple-ScS reverberated waves. They used a common-reflection-point stacking technique to enhance consistent signals beneath reflection points of the reverberated waves.

Wang, Li, and I had the same goal of improving the signal-to-noise ration of seismograms, but our research differentiated in our approach towards the problem. These differences involved how we processed our data, the types of reverberated waves that we analysed, and the location that our data was collected from. Wang and Li processed their data by rotating, deconvoluting, applying a moveout correction for each of the seismic events that they collected, and stacking the events through common-reflection-point stacking. When I processed my seismic events, I removed the instrument responses of the seismograms, fixed any gaps in the seismograms, populated the SAC headers with the predicted S and ScS times, rotated the azimuth of each seismic event between the earthquake, and the station, and then stacked the events through a newly studied stacking method called adaptive stacking.  The next step that followed processing the data was analysing the reverberated waves. Wang and Li interpreted 9 different types of multiple-ScS reverberated waves, and I only focused on reverberations that were strictly between Earth’s surface and the core mantle boundary. Lastly, Wang and Li’s research was focused in the upper mantle and the mantle transition zone, and I focused my research in Australia’s mid mantle, and how discontinuities in that region are affected by the subducting Pacific tectonic plate.

One of the most important aspects in presenting research is having the ability to communicate your findings to a general audience. Although there are multiple ways to deliver a presentation over scientific project, I found that the most useful method was the elevator speech. This method of communication was introduced to me through the IRIS program. The main benefit associated with this method is that it forces the presenter to develop an explanation of their project that grabs the audience’s attention in under a minute. Following this process allows the presenter to effectively convey their thoughts without generating confusion from using jargon, or overexplaining an idea.

When I created my own elevator speech, I focused on explaining the application of my project, the methodology, and the results that I expect from my project. In addition to creating a speech for a general audience, I created another speech for an audience that has experience in the research that I’m conducting. Reflecting on presentations that I have given in the past has taught me that it’s important to adjust a presentation’s content to the type audience that’s interpreting the information. Being able to do this successfully is the key to delivering an ideal speech.

My second week at ANU has been composed of collecting data for my project. My data set has been collected from earthquakes with a magnitude of 6.5 or greater that have occured in the Australasia region at a depth of 75km or greater. The seismometers that were used to collect this data were located in Australia, and around the continent. After collecting this data, my next step was to process it. Processing the data involved running my seismic events through six pre-existing codes on Unix. The first code unpacked the tar files to get the seismograms in SAC format. The second code renamed the files. The third code set the date and time so the files were aligned. The fourth code removed the instrument responses of the seismograms. The fifth code fixed any gaps in the seismograms, and populated the SAC headers with the predicted S and ScS times. Lastly, the sixth code rotated the azimuth between the earthquake and the station, and moved the data into P data and S data directories.

Throughout each of my internship experiences, my overall goal is for my research to contribute something new to existing knowledge. The adaptive stacking method that I'm working on is a unique approach to mapping fine structures in seismograms. The factor that differentiates this method from other techniques that are used to analyze seismograms is that adaptive stacking suppresses unconnected signals, and enhances the signal to noise ratio of consistent waves. By the end of my internship, this research should assist seismologists with collecting better estimates of the depth and size of mid mantle discontinuities, and creating a better understanding of slab stagnation in the mantle transition zone, and the mid-mantle in Australia.

During my intenship at the Australian National University(ANU), the goals that I have set for my self involve having an in-depth understanding of discontinuities in mid mantle, and how the composition of the mid mantle affects subducting slabs. My first month at ANU is primarily focused on research related to identifying mid mantle discontinuties in Australasia. This will be accomplished by analyzing seismic reverberations in the region, and then processing the data by using an adaptive stacking method that enhances the signal to noise ratio of consistent waves. Using this method will also suppress unonnected signals, and magnify the postcursors and precursors of reverberated phases. In the second month of my project, the focus of my project will switch from analyzing mid mantle discontinuities, to understanding the composition of the mid mantle in the Australasia region. This stage of the project will be carried out by generating synthetic seismic phases, and testing various mantle compositions through the use of exisitng codes.